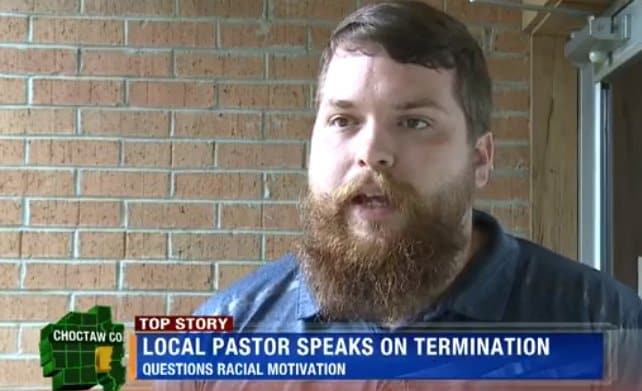 BP Photo Jonathan Greer, former pastor of Mt. Sterling Baptist Church in Butler, Ala., alleges opposition to his plan to invite black children to VBS played a role in the congregation’s decision to fire him.

BUTLER, Ala. (BP) – A former Alabama pastor and the rural congregation that terminated him last July 31 have offered varying reports to media outlets regarding the role racism played in the 31-0 vote to dismiss him.

Mt. Sterling Baptist Church in Butler, Ala., was the subject of news stories by WTOK television in nearby Meridian, Miss., the AL.com news website and other media outlets when it fired pastor Jonathan Greer, 26, over what Greer described as “pushback” against his intention to invite black children to Vacation Bible School.

Mt. Sterling member Norma Wimberley told Baptist Press the church “is not racist” and terminated Greer in large part because of a sermon marked by “anger and hate” in which he seemed to misclassify the congregation as racist. Terry Long, director of missions for the Choctaw Baptist Association, with which Mt. Sterling cooperates, told BP racism “probably” played “the most significant role” of any factor in Greer’s termination but other factors came into play as well.

An Aug. 1 post about Greer and Mt. Sterling on the SBC Voices blog received 6,500 likes in support of the pastor on Facebook during the first two days it was online.

Greer, who pastored Mt. Sterling a year and a half, told BP one of the church’s deacons informed him approximately two weeks ago the congregation “was in an uproar” over his plan to invite black children to VBS and suggested the pastor might need to resign. According to Greer’s account, he would not compromise and deacons told him the “core” of the church believed he should leave. They did not specify a number of people who allegedly held that belief or name them.

Greer preached on racism the following Sunday and a vote on his termination was scheduled for the subsequent week, in keeping with the church’s bylaws. Greer later apologized publicly and privately for broadly classifying the congregation as racist in his sermon.

“I didn’t realize that there were more people in the church … that were okay with people [of all races] coming,” Greer said. “And in my sermon, I didn’t account for that. I kind of lumped everyone together.”

At least four people who voted to terminate Greer have said they are open to black people attending church events, Greer stated. Seven or eight members, he alleged, said they voted for termination explicitly because he wanted to invite black children to VBS.

Deacon Freddie Moore told WTOK the pastor was terminated for not working with the deacons and not visiting church members.

Wimberley, who has been a Mt. Sterling member 20 years, said the church has received expressions of “hate” since Sunday and that the termination was not about racism. The congregation long has had a black member, she said, though that member currently lives out of town and was not present for the vote.

“Our church is not racist,” Wimberley said. “We invite anyone that comes into our door to join us at any time. We welcome them. We ask them to be members.”

Greer “misunderstood what the deacons said or just didn’t listen,” Wimberley said. She was not present for his sermon on racism because of a memorial event for her late husband but later listened to a recording of it and cited the sermon when asked the reason for Greer’s termination.

“If you heard Jonathan’s sermon the Sunday before his dismissal,” Wimberley said, “it was not a sermon of love. It was a sermon of anger and hate.”

Long, the DOM, said Greer’s sermon “was biblically truthful and accurate” but added the pastor “came out swinging.”

“At the beginning of his sermon, it seemed a little overbearing to me and a little harsh,” Long said, “but he softened midway through the sermon and just got into the Scripture and basically told them what the Scripture said. And then he called them to repentance.”

In terminating Greer, the church “made a bad decision, in my opinion,” Long said. “Nothing that the pastor did was worthy of dismissal. He’s a young pastor in his first church. As with all of us, mistakes [were] made – when you’re young especially.”

Still, Long said, “he stood valiantly for the truth. He would not compromise and deserves our admiration and encouragement and praise for that.”

At the same time, Mt. Sterling should not be disfellowshiped from the association, Long said.

“Mt. Sterling Baptist Church, like every church, has people that are committed to Jesus Christ and the Gospel at different levels,” Long said. “It is a mistake to believe that every member of this church is racist. It is a mistake to believe that this church has any kind of printed or stated policy that excludes anyone … They have a documented history of having fellowship with other races.”

Greer, who says he has received expressions of support from as far away as California and London, plans to take a brief vacation with family then look for another pastorate.