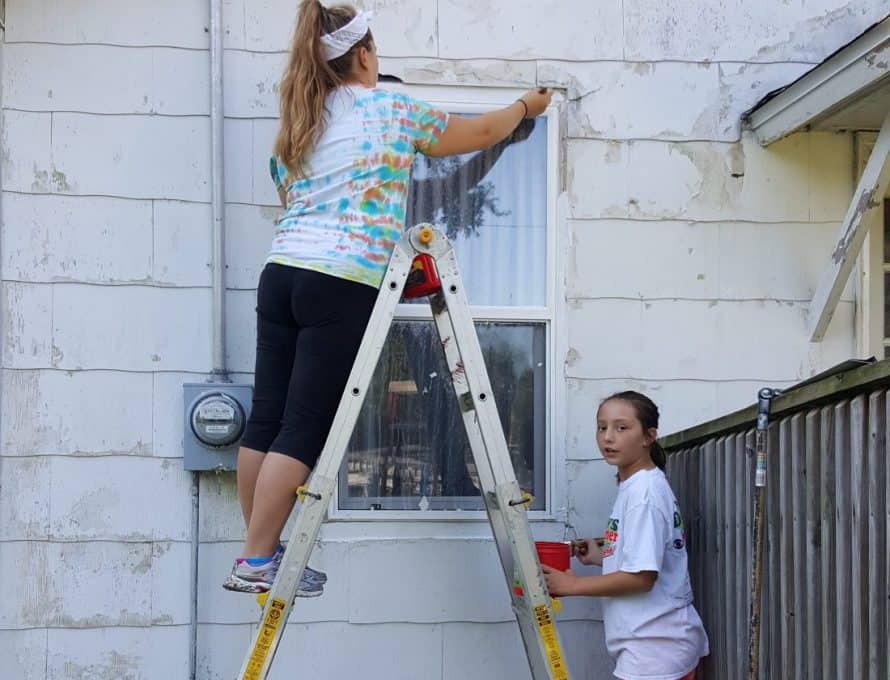 LADDONIA – To paraphrase an adage, First Baptist Church here has found the mission field, and it is among them.

On July 15-17, some 15 church members plus another five from Texas County Baptist Association had service projects in Laddonia and nearby Martinsburg.

Pastor Chris Atkinson said Community Action was contacted for people needing help. That weekend, the group in two teams painted one house and partially re-roofed another home. That Saturday night the movie Woodlawn was shown in the park and drew 70 people to see it, using the Grand Crossings Association license.

“It’s a wonderful example of cooperating Southern Baptist Churches,” Pastor Atkinson said, adding that Paul Posey, Texas County Association DOM was formerly Atkinson’s youth minister. “Our Association is mission-minded and it is spilling over into the churches.”

Ironically, the house that got the new roof belongs to a man once baptized in First Laddonia, and is a neighbor to their minister of music, a fact previously unknown.

“Our church is trying to be a church without walls and be Jesus to the community,” Atkinson said.

The church missions don’t end there. Spurred on by the deacons, the church will fill 100 school backpacks for the Community R-VI and St. Joseph Catholic Schools. They will also offer nutrition information, and vision and cholesterol screening.

“It costs about $27 per backpack,” Atkinson said, adding that while it comes from the deacon’s budget, other people are giving for this. A two-day VBS raised over $400 for backpack supplies.

The church holds a community dinner the second Saturday from October through March, which draws 135 or better people.

“People have come to know the Lord through the dinners,” Atkinson said. “We share the gospel in all we do. The spiritual need needs to be met.

“There is interest in doing this (work project) again. It has lit a fire under our congregation and they want to do more. It’s not a program of man, it is the Lord.”

Currently in prayer is a plan “Soles for Souls” to provide children in foreign countries needed shoes.

First Laddonia will start RAs again in September and Sunday nights will be the youth outreach “Rooted.”

“The devil has something for the kids if we don’t give them something to do.

“I always wanted to be a missionary for the Lord. He spoke to me that I didn’t have to go overseas. He said ‘You are a missionary in Laddonia.”

In another example, while he and his wife sat on the front porch recently in a 40-minute span, one young person accepted Jesus Christ as savior, one wanted to learn more about Christianity, and another youth is almost ready to make a commitment.

“We try to be the Lord with skin on. Because of that, we see the Lord glorified and lifted up. Exalt Jesus and he does the rest. It’s a blessing to be used by the Lord.”