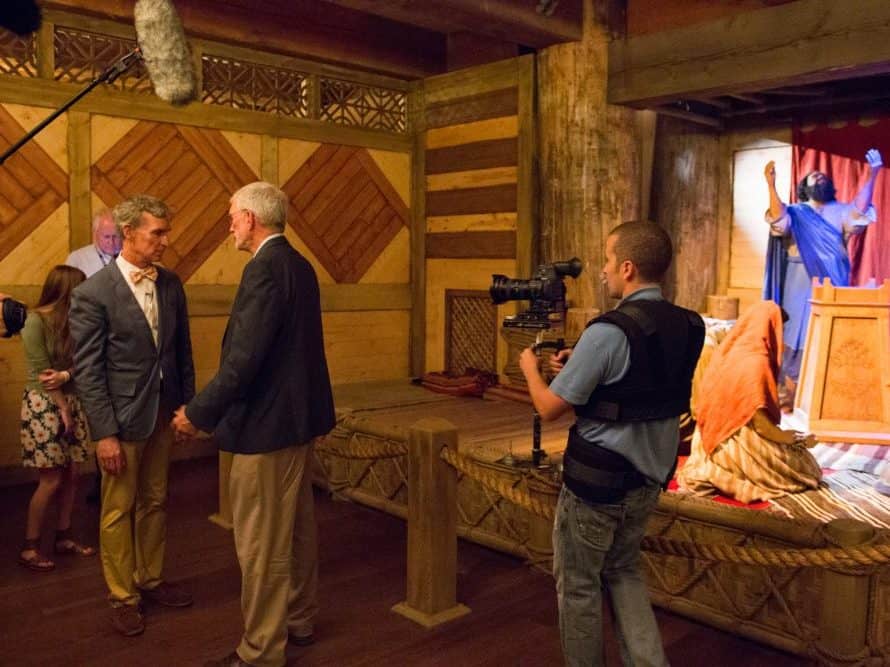 Ken Ham (right) of Answers in Genesis shared the Gospel with science educator and evolutionist Bill Nye during a July 8 tour of the Ark Encounter theme park. BP Photo.

WILLIAMSTOWN, Ky. (BP) – When evolutionist Bill Nye “the science guy” visited a life-size replica of Noah’s Ark in northern Kentucky, he wanted to learn how children were reacting to what he has called a danger to science education.

By the time he left the Ark Encounter theme park, he had also learned the story of Christ’s atoning death on the cross for humanity’s sins, Ark Encounter’s chief executive Ken Ham told Baptist Press, underscoring the park’s value as an evangelistic tool.

Nye “wanted to mock us” during his widely reported July 8 visit, said Ham, founder of Answers in Genesis (AiG), which operates Ark Encounter. “But I believe God is also drawing him. I believe God is burdening his heart. Otherwise, why would he be interested?”

Ark Encounter, located in Williamstown, Ky., opened to the public July 7 and features a 510-foot replica of Noah’s giant boat, described in Genesis 6-9. Nye, a 1990s children’s television personality, has criticized the project publicly and repeated that criticism following his tour, telling The Washington Post the ark replica causes children to become “brainwashed.”

The ark replica “could be just a charming piece of Americana … but this is much more serious than that,” Nye said. “This guy [Ham] promotes so very strongly that climate change is not a serious problem, that humans are not causing it, that some deity will see to it that everything is OK.”

Ham personally led Nye through the ark after Nye accepted an invitation Ham issued to him on Twitter and in a blog post. Nye requested and received permission to film the tour for inclusion in a documentary. Ham and Nye’s walking conversation drew hundreds of onlookers by Ham’s estimate and materialized into a debate on the early chapters of Genesis, science and the Christian worldview.

It was the second such debate between the two. The first occurred in 2014 at AiG’s Creation Museum near Cincinnati and was viewed by millions online, The Post reported.

Nye, CEO of the Planetary Society, arrived at last week’s ark tour prepared to challenge the claims of exhibits and “wouldn’t let me answer any questions,” Ham said. Nye’s resistance to dialog about scientific issues led Ham, a Southern Baptist, to ask about his worldview and personal spiritual beliefs.

When they arrived at an exhibit on life before Noah’s flood, Ham explained the origin of sin and how the first blood sacrifice – when God provided animal skins as clothes for Adam and Eve – pointed forward to Christ’s ultimate sacrifice on the cross.

“I talked to Bill about the second death and that when you die, you’re not done,” Ham said. “You’re either going to be with the Lord or you’re going to be separated from Him for eternity.”

At the end of their tour, near statues of Noah’s family praying, Ham asked if he could pray for Nye, who responded, “I can’t stop you.”

“He just stood there and stared at me,” Ham said, “… and I prayed for him that God would open his heart that he wouldn’t suffer the second death.”

Ham encouraged other Christians to use Ark Encounter to share the message of Jesus with their friends too.

“Noah’s Ark,” Ham said, “is a picture of the Gospel. As Noah and his family went through a door to be saved, we have to go through a door and that door is the Lord Jesus Christ.”

Reports have emerged that non-believers who were unwilling to attend church have visited Ark Encounter, Ham said. He is anticipating reports of people coming to faith in Christ through the park.

“You can use the ark to present the Gospel in many ways,” Ham said. “It answers so many questions about the Bible…. For most people, you’ll find [that] when you take your non-Christian friends there, they’re fascinated.”

As for Nye, Ham described him as seemingly closed to the Gospel. But he marvels at the impact Nye could have if he trusted Christ as his Lord and Savior.

“Imagine if he were someone like a Saul and became Paul,” Ham said. “Imagine if something like that happened to someone like Bill Nye. It may not. But he’s going to stand before God one day without excuse. He has heard the Gospel.”