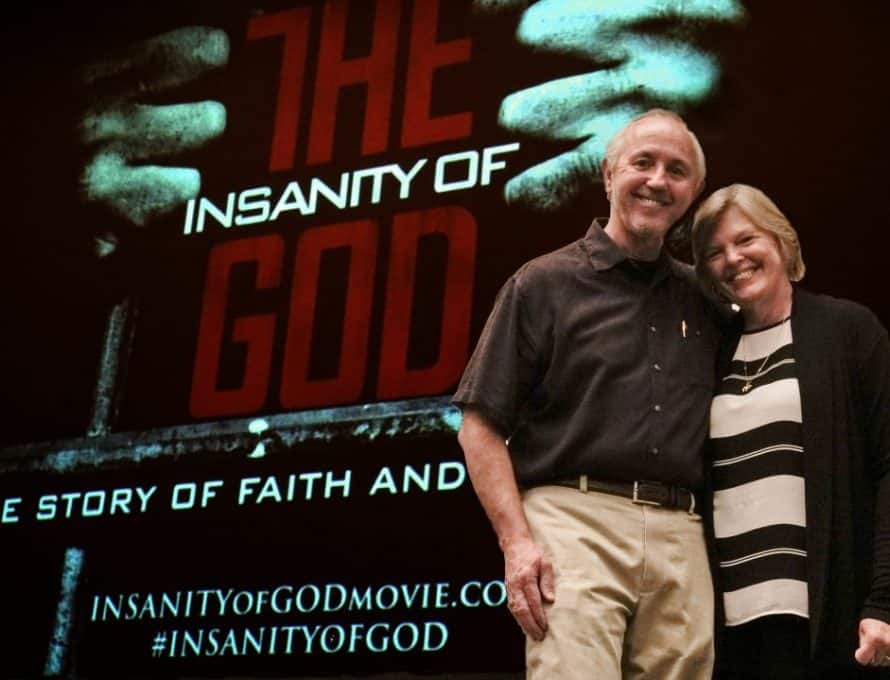 ST. LOUIS – Nik and Ruth Ripken appeared at the screening of “The Insanity of God” documentary Monday, June 13 in St. Louis. The film is based on Nik Ripken’s book by the same title and was screened prior to the annual meeting of the Southern Baptist Convention. BP Photo.

Ripken, then a young International Mission Board (IMB) missionary, had caught a ride with the Red Cross in a small plane carrying relief supplies across the border between Kenya and its war-ravaged neighbor.

What he saw shook him to the core. He met parents who asked for burial cloths for the children they’d lost rather than food and water for themselves and saw soldiers passing out narcotics rather than relief supplies to those in need.

“It was like I’d been plunged into hell,” Ripken recounts in “The Insanity of God,” the first theatrical release from LifeWay Films, which was previewed June 13 at the Ferrara Theatre in St. Louis. The screening there was held in conjunction with the Southern Baptist Convention’s annual meeting.

The movie, based on a book by Ripken (who uses a pseudonym), follows him and his wife Ruth from their days as a young missionary couple just starting out through their time in Somalia and some of the hardest places in the world.He wondered how faith could survive in the midst of such suffering.

While at their home base in Kenya, the Ripkens’ young son Timothy suffered a severe asthma attack. Unbeknownst to the family, their home had a mold infestation exacerbated by the start of the rainy season.

Ripken rushed to the hospital. At one point, he pulled over and compelled a passerby to get in the car and drive so that he could administer CPR to Timothy.

But Ripken’s efforts were in vain and Timothy died. The Ripkens buried their son on the grounds of a school in Kenya, not far from their home.

The Ripkens struggled with guilt and wondered if Timothy would have lived if they had stayed in the United States. Was their call to missions worth Timothy’s life?

Soon afterward, the Ripkens set out to answer that question. They traveled the globe, talking with Christians in more than 70 countries where believers face persecution.

Everywhere they went, they met believers who had been able to persevere despite their suffering. Among those persecuted Christians, the Ripkens found kindred souls, who knew the cost and suffering that come from following Jesus. They learned faith can endure and thrive, even in the midst of despair and struggle.

The interviews with persecuted believers became the basis for Ripken’s book, “The Insanity of God,” and the film, which was co-sponsored by the IMB.

The preview crowd gave the film, which opens in 400 theaters across the United States on August 30 as a one-night event, a standing ovation.