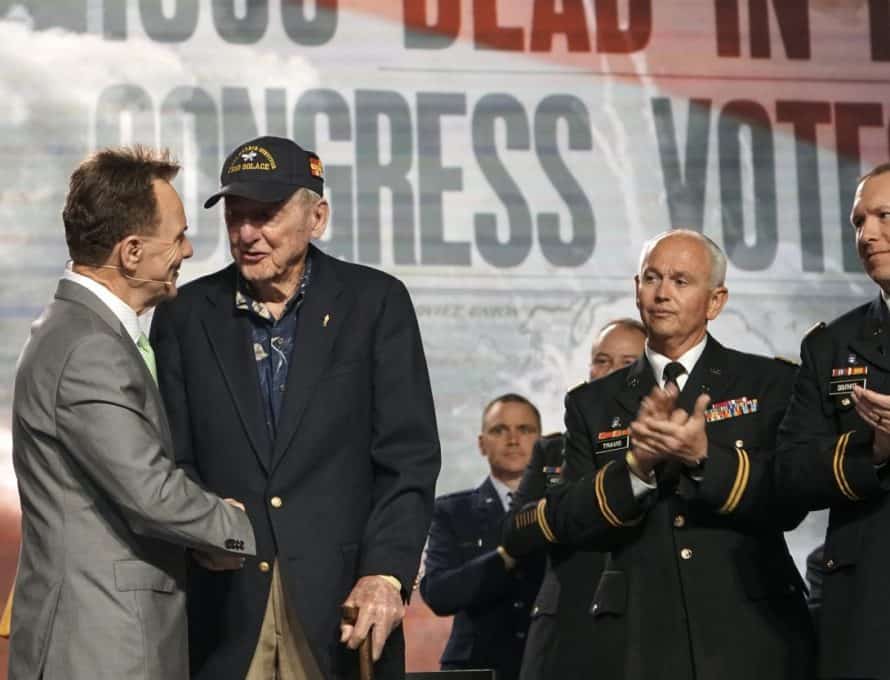 ST. LOUIS (BP) – World War II veteran Bill McAnany, until recent years a Missouri resident and one of 2,000 living survivors of the Japanese attack on Pearl Harbor, was introduced to the Southern Baptist Convention as messengers honored America and recognized military veterans June 14 at the SBC’s annual meeting in St. Louis.

Calling it an “awesome privilege,” SBC President Ronnie Floyd observed that a memory of WWII disappears from American culture every three minutes as those who fought in the global conflict pass into eternity.

“We must take every opportunity to honor our veterans of the greatest generation while they are still among us,” Floyd said.

This December, the United States will commemorate the 75th anniversary of the attack on Pearl Harbor by the Japanese navy, Floyd noted. Recalling that the attack killed 2,403 Americans and wounded 1,178 others, he noted, “Pearl Harbor is a constant reminder that our freedom, purchased by the blood of American patriots, should never be taken for granted.”

Floyd recounted McAnany’s story – that he joined the Navy in 1938 and was assigned to the USS Solace, a 400-bed hospital ship that was present at Pearl Harbor for the fateful events of Dec. 7, 1941.

Quoting McAnany, of Wood River, Ill., Floyd said, “You quickly realize that life is a gift not meant to be wasted.”

Floyd also recognized the 75th anniversary of the first military chaplains endorsed by the North American Mission Board and its predecessor, the Home Mission Board.

Doug Carver, NAMB’s executive director of chaplaincy, called military chaplaincy “truly a frontline ministry that is vital to the extension of the local church and the advancement of the Gospel.”

Carver recounted that 75 years ago as America was on the verge of global war, messengers at the 1941 Southern Baptist Convention in Birmingham, Ala., “firmly agreed that there was no greater soul-winning opportunity facing Southern Baptists than the thousands of young men pouring into the military training camps around the country.”

In June 1941, the Home Mission Board commissioned the first chaplains and appointed Alfred Carpenter, pastor of First Baptist Church of Blytheville, Ark. to lead the effort.

“Carpenter believed that every chaplain was a missionary in uniform, an evangelist at large called to share the Gospel where few missionaries could go,” Carver said. From 1941 to 1945, Southern Baptist chaplains recorded 299,342 professions of faith, accounting for 82 percent of those reported by the Home Mission Board during that period.

In recognizing all WWII veterans and other military veterans present at the SBC gathering in St. Louis, Floyd led SBC messengers in the Pledge of Allegiance.

Following the pledge, the choir and singers of Cross Church in northwest Arkansas sang “The Star-Spangled Banner.”