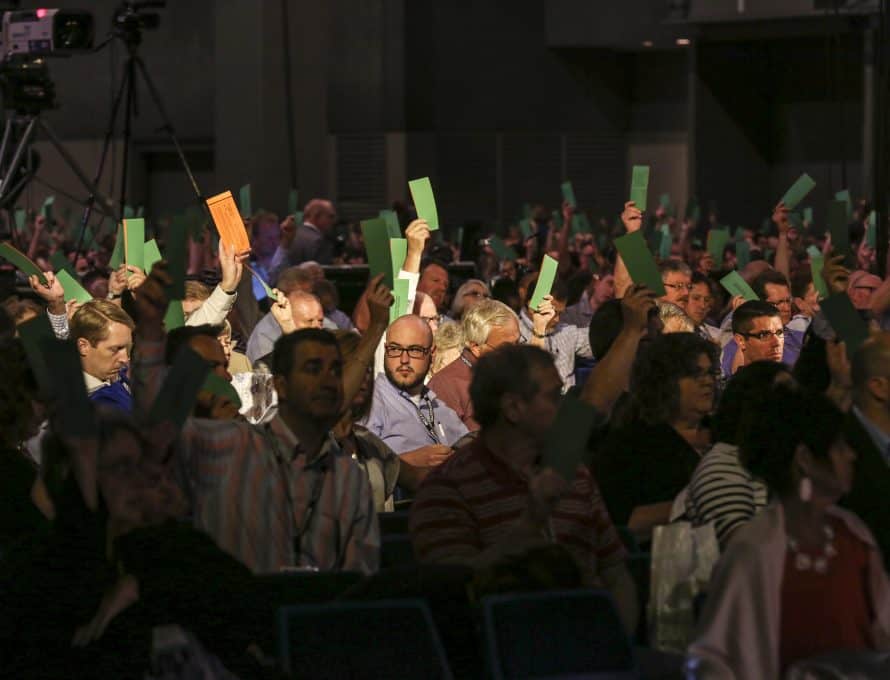 BP Photo ST. LOUIS – Messengers at the annual meeting of the Southern Baptist Convention cast ballots for a resolution during the afternoon session here, June 14.

ST. LOUIS (BP) – Messengers to the 2016 Southern Baptist Convention, in addition to repudiating the display of the Confederate battle flag, approved 11 other resolutions on a variety of culture and ministry concerns.

For Stephen Rummage, chairman of the Resolutions Committee, a resolution calling Southern Baptists to evangelize was central to the 10-member panel’s deliberations in presenting the 12 measures to the messengers.

The resolution on evangelism “might just seem like a standard resolution for an evangelical body such as Southern Baptists to pass,” Rummage said at a news conference Wednesday morning (June 15), “but really that is at the heart of everything that we talked about, including what we had to say about the Confederate flag. Everything that we do should have as its end and as its goal reaching people with the Gospel of Jesus Christ.”

The committee-presented resolution called for Christians who display the Confederate flag “to consider prayerfully whether to limit, or even more so, discontinue its display” because of the “undeniably painful impact of the flag’s symbolism on others.” Acting on an amendment offered by former SBC President James Merritt, messengers overwhelmingly approved language that urged “brothers and sisters in Christ to discontinue the display of the Confederate battle flag as a sign of solidarity of the whole body of Christ, including our African American brothers and sisters.”

In addition to the Confederate flag measure, the other 11 resolutions:

• affirmed Southern Baptists’ commitment to biblical sexuality and urged the protection of religious free exercise. Kelvin Cochran, who was fired as Atlanta’s fire chief after writing in a book that homosexual behavior is immoral, presented the resolution to the convention as a member of the committee.

• called for prayer for and pledged support to those affected by the June 12 killings in Orlando.

• encouraged faithful proclamation of the Gospel by churches and intentional evangelism by individual Southern Baptists locally, nationally and globally.

• declared “unrelenting opposition” to efforts by military leaders and the Obama administration “to increase the likelihood that women will be placed in harm’s way” along with voicing support for service members and their families.

• called on the government to enact strict security in screening refugees and for Southern Baptists to compassionately minister to and share the Gospel with them.

• urged participation in voting and prayer for God to provide “spiritual, moral, ethical, and cultural renewal.”

• encouraged churches to consider increasing ministries to Alzheimer’s and dementia patients and their family caregivers.

• called for pastors to support freedom of the press and journalists to practice that freedom responsibly.

• affirmed “In God We Trust” as the national motto and encouraged its public display.

• supported Israel’s right to exist as a free state and encouraged renewed prayer for peace in and salvation of Israel.

• expressed gratitude to God as well as Southern Baptists in the St. Louis area and all others who helped with this year’s meeting.