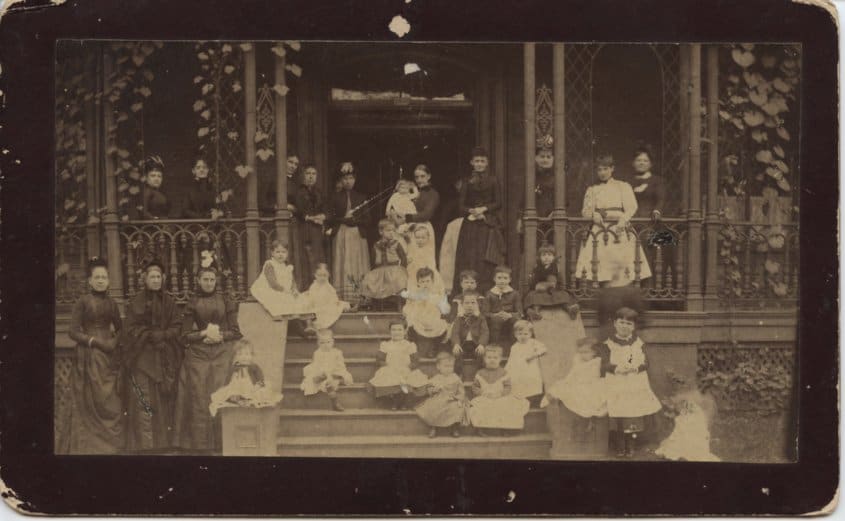 MBCH Photo One of the earliest known photos of the Missouri Baptist Children’s Home.

BRIDGETON – Missouri Baptist Children’s Home began as a dream in the heart of one dedicated Christian lady in 1882; a Protestant orphanage was needed to provide care for infants. Mrs. Joseph B. Thompson shared that dream with other Baptist ladies and it soon spread to five Baptist Churches in St. Louis. The faithfulness, hard work and prayerfulness of those ladies led to the dream being realized just four years later. On April 1, 1886, the Missouri Baptist Orphan’s Home opened and received five infants.

That was the beginning of a long journey that has led to one of the largest Baptist childcare agencies in the nation.

On the 130th birthday of Missouri Baptist Children’s Home (MBCH), the agency maintained residential campuses in Bridgeton (St. Louis), Mt. Vernon and Peculiar with regional offices in Jefferson City, Joplin, Kansas City and Springfield. Both the northwest and southeast regions of Missouri are also served by MBCH.

Programs and ministries have expanded from the original mission of caring for orphaned infants to include maternity homes and pregnancy services, therapeutic group homes, family restoration, transitional living and foster/adoptive/kinship. Ministries to developmentally disabled adults and to girls rescued from human trafficking have also been added as needs arose.

This growth in locations and ministries has enabled MBCH to minister to far more children, youth and families than envisioned in 1886. In 2015 alone, Missouri Baptist Children’s Home served a total of 241 children and youth in residential services programs and 876 clients through community-based services. Ministries to families and responses to other requests for services brought the grand total served to 4,413.

The story of Missouri Baptist Children’s Home, however, is not a story of the expansion of good social welfare programs throughout the state. The impact of MBCH is best seen in changed lives. In 2015, 480 children found loving, forever homes. Seventy-eight babies were born who may not have been given life without this agency. Every child and teenager heard the Gospel of Jesus Christ and saw the Gospel lived out by the Christian staff. There is no telling how many of the thousands served by MBCH through the years have made professions of faith.

Children served by MBCH have gone on to become Christian teachers and business leaders, ministers and missionaries, and godly mothers and fathers. One former resident even became President of a Baptist college.

The story of MBCH is also the story of a partnership with Missouri Baptists. When the dream of an orphans’ home moved toward reality, there was never any doubt that it would be a Baptist orphanage managed, supported and operated by Baptists. Throughout the years the bond between Missouri Baptist Children’s Home and Missouri Baptists has remained and grown even stronger.

The history of Missouri Baptist Children’s Home is, in reality, the story of God’s leadership and faithfulness. Through hard times, God sustained this ministry. Through good times, God has provided the vision, resources and increased opportunities to serve more and more children, youth and families.

For 130 years, MBCH has been committed to providing care that meets or exceeds the best professional standards as it unapologetically shares the Gospel of Jesus Christ. Missouri Baptist Children’s Home knows that no person can achieve their potential or function at their best without a personal relationship with Jesus Christ and Savior and Lord.

The founding ladies would not be able to recognize the Missouri Baptist Children’s Home of 2016 as the same agency they established. The one thing that has remained the same for 130 years is the commitment to being a Christ-centered agency.

Mrs. Thompson’s dream seemed big – at times it seemed almost too big to be realized. But God’s vision and plan was even bigger. To God be the glory!