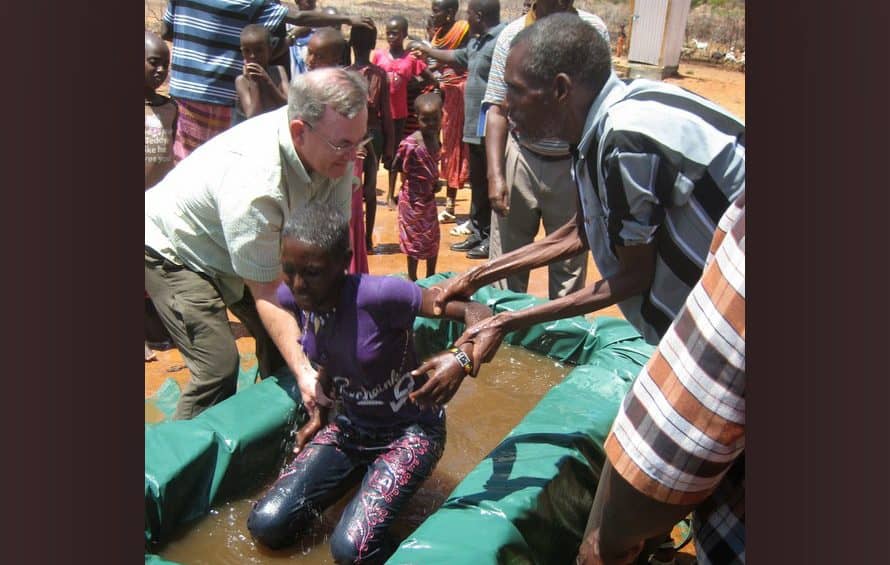 EAST AFRICA – Scott Flippin, pastor of Norfleet Baptist Church in Kansas City helps to baptize a woman here, where his church has helped to make hundreds of disciples and multiply churches--five at this time. Photo courtesy of Scott Flippin.

JEFFERSON CITY – In the fall of 2013, five members from Norfleet Baptist Church of Kansas City set out to East Africa in their first effort to reach a people group thirsty for the gospel. Since that time, church members have reach hundreds of people and have helped to plant five churches in the region. When they return this fall, they expect to witness 200 baptisms.

“It’s a Gideon thing for us to do this,” said Scott Flippin, pastor of the congregation of roughly 65. But, through the grace and power of God, this small church is living out a core part of Missouri Baptists’ mission: to multiply churches both in their home state, as well as across the world.

The MBC intends this year to “discover and engage 100 MBC churches” that desire to be involved in this God-sized task of multiplying churches. It also has begun to train 75 sending churches, as well as 50 people who will serve as “church multipliers.”

“Finally, by the end of this year, we plan to see 380 churches – 20 percent of all MBC churches – engaged in direct church multiplication.”

The MBC’s efforts to multiply churches are by no means limited to Missouri, but rather extend to the I-29 corridor running from Kansas City up to Canada and to nations including Mexico and – most recently – Italy.

The MBC recently partnered with churches in the northeast region of Italy, and Hedger hopes 30 churches will commit to multiplying churches in the area. The need, he said, is indeed great.

“Our missionaries have told me that the population in these three regions is 0.045 percent evangelical,” Hedger said. This means that only four-and-a-half people out of every 10,000 are evangelical believers.

“It is an exciting time,” he added, “for God to invite MBC churches to cooperate together on the front lines in northeast Italy to see lives and communities transformed by the gospel.”