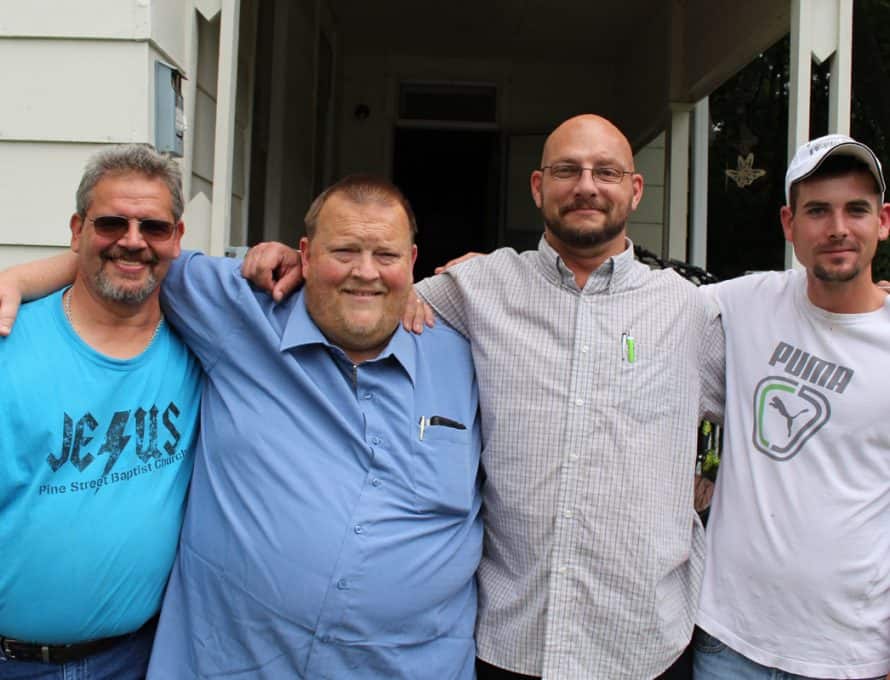 NEVADA – When they first met, Pine Street Baptist Church member Ron Smith knew that God had something special in store for Gabe Kincheloe.

And he told Kincheloe so, not that Smith would have blamed Kincheloe if he had his doubts about this. Like many others who walk into Pine Street Baptist’s New Life Homeless Shelter here, Kincheloe was at the end of his rope.

“The reason I came to the shelter was because I had a drinking problem, and I went through a divorce. And this made it a lot worse,” Kincheloe said. “The only thing I knew was to drink and to try to forget about it. But it landed me in jail for a couple months. I lost a lot of my stuff.”

But, because of Smith’s constant witness, Kincheloe renewed his childhood faith in Christ, was baptized at Pine Street Baptist, and has been discipled by Smith ever since. Earlier this spring, Smith even took Kincheloe on a mission trip to Mexico, where they worked to construct and paint houses for impoverished squatters.

“He has grown in Christ, and he’s sharpened my sword every once in a while,” Smith said.

And Kincheloe hasn’t been the only one to experience this new life in Christ at the homeless shelter. In fact, of more than 60 people who have stayed at the shelter since its opening in November 2014, more than 40 have professed faith in Christ.

Even before the shelter opened, the members of Pine Street Baptist Church knew that homelessness was a problem in their area. Some people in the region had been pulled down by drugs and alcohol. Many people had lost a job or were without a sufficient income after the death of a loved one. Smith and his wife had even helped some fellow church members who were temporarily homeless.

Seeing the plight of many people in Nevada and in nearby communities, Pastor Chad Bailey of Pine Street Baptist was deeply burdened. And, for that reason, he prayed.

For a few years, he prayed. And finally he felt that he should speak to the deacons at Pine Street Baptist about what the church could do to meet the needs of homeless people in the area. And, for another year, they prayed before bringing this burden before the congregation in the August of 2014. Three months later, the homeless shelter had been established. By that winter, numbers had ballooned to 14 people living in the shelter at any given time. Every month since that time, the shelter has had to turn away up to 50 people who needed help.

“We have chosen to be a church that prays, and that has fueled everything that God is doing here,” Bailey said.

And, in response to prayer, God has continued to work. This past winter, the church established a local thrift store, which not only raises income to support the homeless shelter but also employs some of the men in the shelter.

“We’re working on a couple of other projects that do that too,” he said. “We’re trying to roll out small businesses to help these guys generate income and that also teach them skills.”

But, ultimately, Bailey says the purpose of the shelter is in its name: New Life.

“We’re trying every day to minister to their hearts, their souls, their families, restoring marriages,” he said. “We’ve seen some amazing things happen in people’s life.”