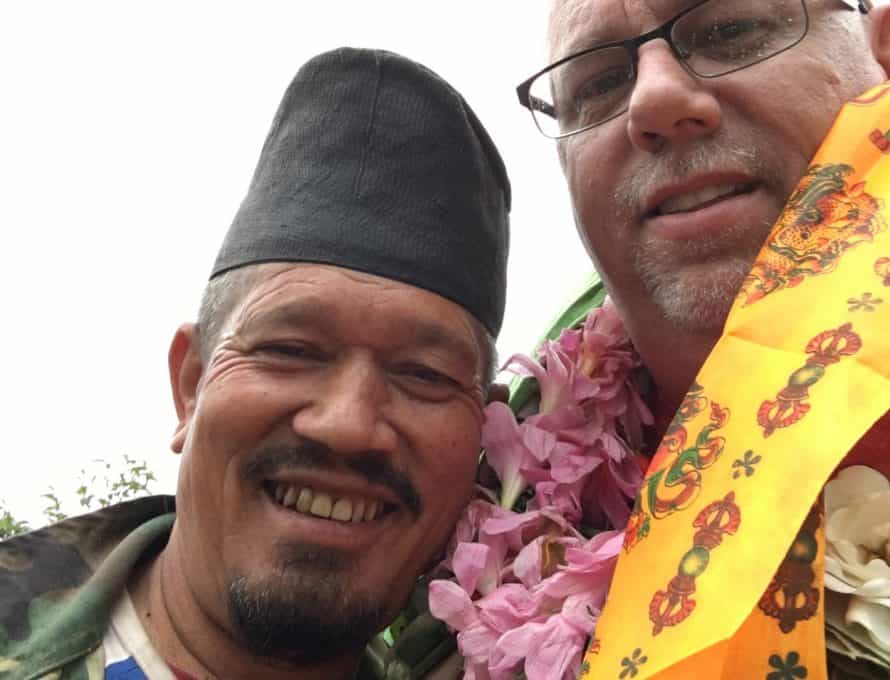 NEPAL - Dwain Carter, right, director of disaster relief for the Missouri Baptist Convention, poses with a local pastor who despite persecution remains faithful to the gospel. Pathway photo by Dwain Carter.

KATHMANDU, Nepal – Dwain Carter jolted awake at 4:30 a.m., May 14. Still jet lagged from his flights to Nepal, he was  instantly able to identify that he was feeling an earthquake. With a magnitude of just 4.4, the tremor was nowhere near as strong as the April 25, 2015 7.8 magnitude earthquake that claimed more than 8,000 lives and injured 21,000 in this Hindu country sandwiched between China and India.

Carter, the director of disaster relief for the Missouri Baptist Convention, was in Nepal to assist Baptist Global Recovery (BGR) to help wrap up the year-long rebuilding effort since the massive earthquake last year.

Working together with local Nepalese partners and more than 400 Baptist volunteers from the United States, BGR has helped oversee the construction of more than 600 homes, with more still under construction. These new homes are simple, sheet metal structures that are able to flex in an earthquake or fall over with less risk to the inhabitants. Most homes in rural Nepal that were affected by the quake were handmade brick homes, and the subsequent collapsing of the homes was responsible for most of the death toll.

“They’re a little hotter in the summer and colder in the winter, but at least they’re safer during the earthquakes,” Carter said.

Donations to BGR also helped purchase 10,000 sheets of tin for roofing, in addition to blankets, emergency medical care, and nearly 10,000 temporary shelters. Others, like Carter, trained leaders in community development, helping them identify needs, provide better access to water, maximize agriculture, etc.  The blue walls of the BGR-built homes dot the terraced mountains of certain regions, a visual testament of the work and effort given through BGR.

Growth in a Dark Land

Equally as massive is the challenge to share the gospel in a Hindu nation that has just a 1.4 percent Christian minority. But like the blue walls that show progress on the Nepalese slopes, the gospel is beginning to show signs of traction in the face of darkness and persecution.

“They soaked up everything we said like sponges,” Carter said. “They’re so ready to see the advancement of the gospel.”

Jeff Palmer, executive director of BGR agreed that Nepal is receptive to the Gospel.

“They’re fairly responsive, but they’re still very persecuted,” he said. “There’s still persecution, whether it’s cultural, religious, or government persecution. 20 years ago we were driven out of many regions, then when we responded to them after the earthquake, God opened the doors.”

Carter met one local pastor who 18 months ago was dragged from his home by Maoist guerillas in the middle of the night because he refused to stop preaching the gospel. With a knife to his throat, he and his family were forced to watch their home burn and their animals slaughtered. Because of the subsequent faithfulness of that church’s leaders and the earthquake recovery partnerships, the perpetrators have since professed Jesus and have now offered their own homes as Bible study locations.

According to globalchristianity.org, the number of those professing Christ in Nepal is growing at an annual rate of 10.93 percent, making its Christian minority the fastest growing Christian population in the world.

Domestic disaster relief is an established, high-profile ministry in the U.S, but international relief has become more of a focus in recent years. This is the second international recovery project Carter has been able to work with, including hurricane recovery in the Philippines in 2013-2014 where dozens of Missouri Baptists worked with BGR and teams from Illinois, Louisiana, California and Texas rebuild a school and homes on the tiny island of Gibitngil.

“As Missouri Baptists, we’re focused on life and community transformation,” he said. “In both of these locations around the world we’ve seen massive changes in lives and communities because of disaster relief and recovery. It’s what we’re about.”