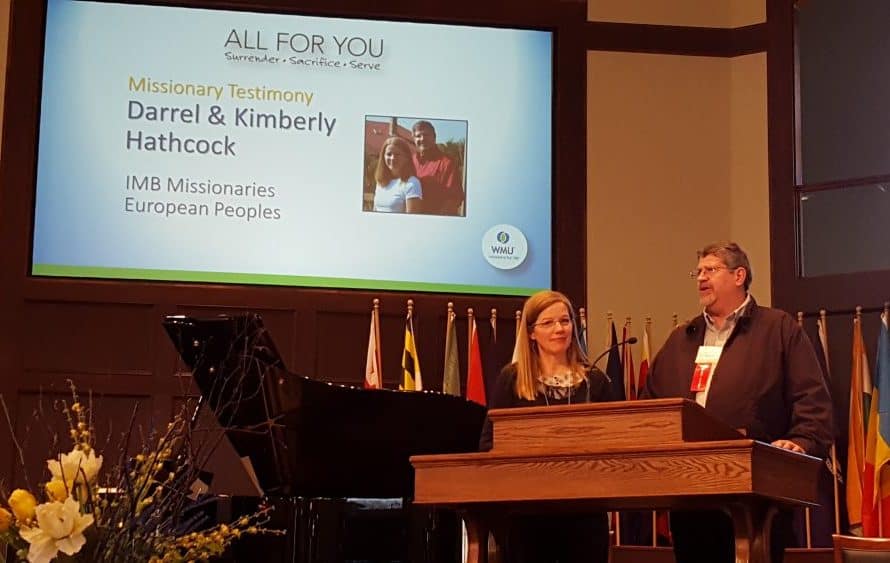 KANSAS CITY – The Missouri Women’s Missionary Union (MWMU) recently celebrated missions and held their annual meeting at Midwestern Baptist Theological Seminary. “We usually meet in churches,” Cherri Crump, president of Missouri WMU, said, “and this gave the ladies an opportunity to see what a wonderful facility is offered to Missouri Baptists with our seminary.”

The theme for the meeting was ALL FOR YOU: Surrender-Sacrifice-Serve.  As the keynote speaker, Rosalie Hunt, author, speaker, retired International Mission Board missionary (IMB) and former National WMU recording secretary, developed the theme during the several general sessions.

Hunt used stories of Adoniram and Ann Judson, Hepziban Jenkins, Lottie Moon and others to focus on the theme demonstrated by their lives.  “Life’s greatest quest is to seek the will of God” she said, “and that is surrender.  Then, Life’s Greatest Discovery is to find the will of God and that is sacrifice.”

Hunt pointed out the real success that the missionaries had discovered. “Life’s Greatest Achievement,” she continued, “is to do the will of God—to serve.”

Several missionaries gave testimonies during the meeting.  Darrell and Kimberly Hathcock currently serve in Hungary; Jared and Michelle serve the South Asian Peoples; Matt Marrs is a city missionary for SEND Kansas City and Dwain Carter is a part of the Disaster Relief/Mobilization.  Joe and Carol Barbour were recognized as Emeritus Missionaries for serving in Zambia during 1988-1998.

Many breakout sessions provided growth for the WMU participants.  “Our time together gives us a sense of the larger picture of missions,” Crump said.  “The sessions encourage the work in the local church and it provided a time for training for women teaching about missions.  It is a time of inspiration.”

John Yeats, Executive Director of the Missouri Baptist Convention, challenged the ladies to be servant leaders and to reach people everywhere with the testimony of the Lord Jesus.  “Be disciplemakers,” he said, “WMU is making disciples here and around the world. Training up children and developing the next generation of leaders.”

In addition, Yeats presented a check to Crump and Laura Wells, Executive Director of MWMU, for $5474.34.  “We couldn’t do a lot of what we do without the support of the Missouri Missions Offering,” Crump said. “We use it for advanced training for some of the leaders and we were able to contribute to mission trips.”

The women attending the meeting helped several local ministries on the Friday morning preceding the meeting. Volunteers worked at Hillcrest Transitional Living Center, Seminary Food Pantry and the Patricia Sewing Project. Items were also collected for the Seminary Food Pantry and the Restoration House, which ministers to rescued victims of sex trafficking.

Crump said that they always minister locally during the meeting time. “We do it because that is who we are. We try to do it at every level in the local churches and at statewide meetings.  It is in our DNA.  We pray for missionaries and do missionary projects to extend God’s hand to everyone.”