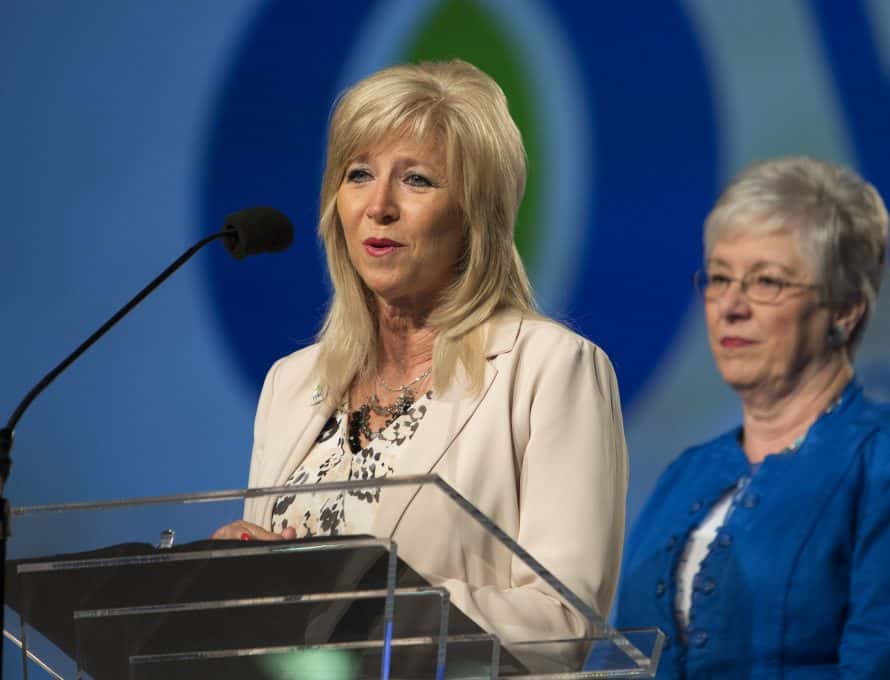 ST. LOUIS – The excitement for the upcoming WMU Missions Celebration and Annual Meeting is building.  The WMU is celebrating what God is doing around the world through missions at the meeting slated for June 12-13 in St. Louis at the Ferrara Theatre at America’s Center, 701 Convention Plaza, which is just prior to the SBC Convention.

“We’re so excited,” Laura Wells, Missouri WMU Executive Director, said.  “It doesn’t get closer than this.”

“By All Means” is the theme for the Celebration taken from the new watchword found in I Corinthians 9:22b-23. “I have become all things to all men, that I might by all means save some. Now this I do for the gospel’s sake, that I may be partaker of it with you.”

General worship sessions will be led by Dr. Jeff Iorg, president of the Golden Gate Baptist Theological Seminary.  He is also the author of the 2016 WMU emphasis book, Unscripted: Sharing the Gospel as Life Happens.

Other speakers include Sebastian and Erin Vazquez, international church planters; Goldie Francis, an International Mission Board worker; Travis Kerns, a missionary serving with the North American Mission Board in Salt Lake City; and Katie Orr, author and pastor’s wife. Iorg’s book, “Unscripted: Sharing the Gospel as Life Happens,” will be the emphasis book for WMU in 2016–2017.

Kathy Scott, general chairman for local arrangements and former Missouri WMU Executive Di-rector, believes this Celebration will be a wonderful opportunity for the ladies of the WMU to grow in faith.

“They will hear first-hand from missionaries,” Scott said. “Learning to pray more effectively will be an outcome as they hear of the answered prayer of missionaries and as they hear about specific needs.”

Linda Cooper, national WMU president, will report on the work of WMU.  The opportunity to hear about the national effort will also be a learning experience according to Scott.

“Hearing about the national work of the WMU,” she said, “will be encouraging.  The work is growing and it will be important to hear.”

The Celebration will offer a wide array of breakout sessions which range from Bible Study enhancement, discipleship, and a deeper look at missions.  The breakout sessions will provide you with practical ideas of how to have an impact on the local church, the community, the nation and the world for Christ.

Wells is excited about the leadership of the WMU and the opportunity to recognize a special leader. “We’re blessed to be able to honor Wanda Lee, national WMU Executive Director,” Wells said. “She is retiring after sixteen years of service.”

Lee was elected executive director of national WMU in January 2000. She is the only woman in the history of WMU who also served as national president, an office she held 1996–2000. Lee served as president of Georgia WMU from 1993–1996. In addition, she and her husband Larry served as missionaries with IMB from 1979–1981.

Scott pointed out another highlight of the celebration.  “We’ll have lots of exhibits to view,” she said, “and LifeWay will be on site.  If they don’t live close to a LifeWay store, the ladies love this opportunity.”

No pre-registration is required for the Celebration and a complete schedule with the bios of the speakers can be found at www.wmu.com/missouri.