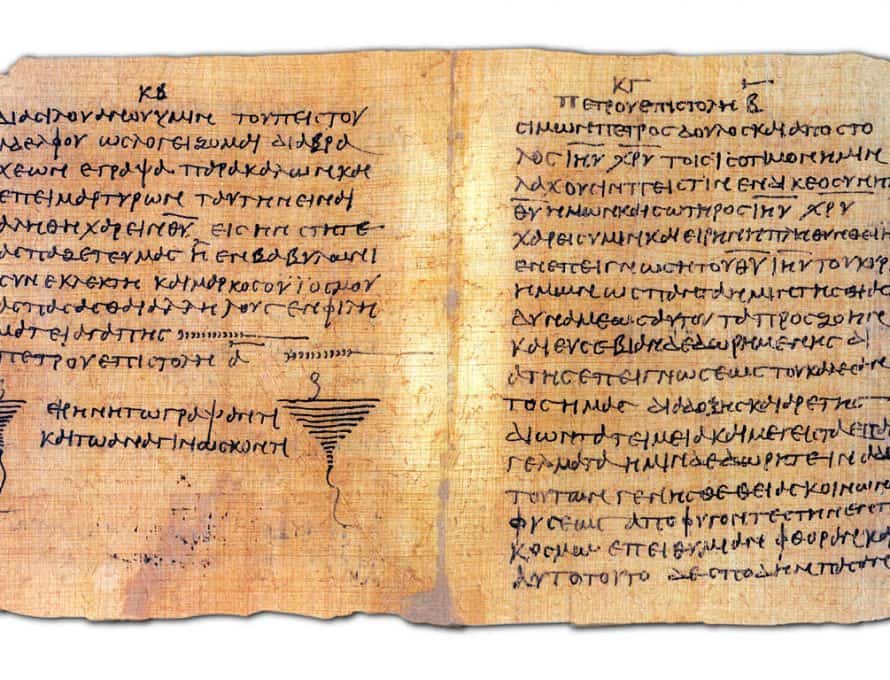 Papyrus 72 is an early New Testament papyrus. It contains all the text of 1 Peter, 2 Peter, and Jude.

The faith of some Christians is challenged when they learn that the autographs, or originals, of the Bible no longer exist. Written on stone, metal, papyrus, and parchment, the words first penned by 40 divinely inspired authors over 1,500 years have not survived the ravages of time.

Of course. But He didn’t.

Nor did God promise that an unbroken line of inerrant copies would be made and preserved from the inspired autographs.

What we’re left with are thousands of manuscript copies sporting tens of thousands of variants, a reality that has spurred scholars like Bart Ehrman to abandon Evangelical Christianity in favor of agnosticism.

But should that be our response?

In Searching for the Original Bible, theologian Randall Price offers 10 reasons we don’t need the autographs of Scripture to hold firmly to the inerrancy of God’s revealed Word.

1. The multitude and quality of manuscript copies reveal what was in the autographs. Textual variants, which usually are very minor, occur in only about 40 pages out of some 830 in modern translations of the Old Testament and in only three pages out of some 200 in the New Testament.

4. If we had the originals, we would not labor in the same way over the text. Textual criticism (a method used to determine what the autographs of Scripture actually said) leads us to more diligently search the Scriptures to understand the authors’ intent.

5. The originals would most likely acquire the status of relics. History shows that people seem unable to resist the temptation to exalt, or even worship, supposedly sacred relics. We see this early in Scripture as the bronze serpent fashioned by Moses later becomes an object of Israelite veneration, prompting King Hezekiah to destroy it (2 Kings 18:4). Imagine the tendency toward bibliolatry if the originals had survived.

6. Having the original would neither increase faith nor reduce the differences in interpretation that divide Christians. Doctrinal differences have little to do with textual matters, but usually are based on conflicting principals of interpretation, different traditional or confessional positions, or political interference.

7. Since the originals could not be distributed without suffering damage, it has always been necessary that copies exist to spread the Word. The New Testament, for example, was created for the church, and from the beginning the spreading of the church depended in part on the spreading of Scripture.

8. The copies were in many cases better than the originals – the script was clearer, the materials were better. This does not mean “textually superior” since the autographs are inerrant. But as Price points out, “the Jewish people have never thought that the copies their scribes continually transcribed were inferior to the originals, even when those originals were available in storage.”

9. Even if we had the originals, we would still have differing translations based on them. For the Word of God to be taken to the ends of the earth, it was necessary to translate the Hebrew, Aramaic, and Greek into thousands of other languages and dialects.

10. Because of constant use and the effects of time, copies were necessary to preserve the biblical texts. The autographs of the Old Testament books were put in storage in the Temple, but New Testament originals generally were written to particular communities or churches, which likely would have kept the original.

Price summarizes, “What we do have is an abundance of faithfully transcribed manuscripts that have preserved God’s Word and have been used to give us, through the labors of textual critics, the most accurate copies of the originals possible. For this we should continually thank God, for by divine Providence, our Bible is the best preserved book in the world!”