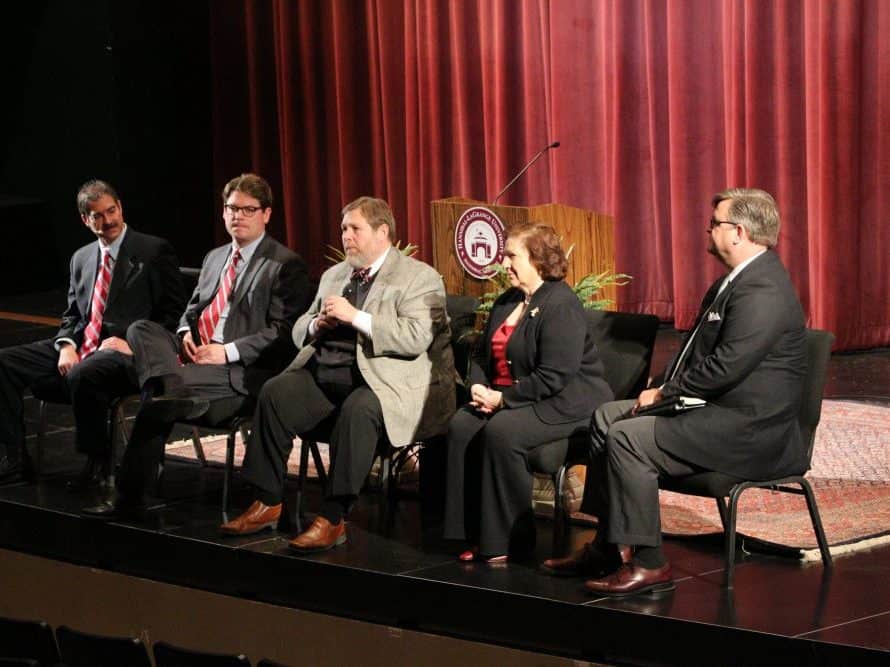 HANNIBAL – Sitting next to the MBC Family Ministries specialist Joe Ulveling (left) and Brad Wilcox of the National Marriage Project, Ben Mitchell of Union University takes a question during the morning Q&A panel session during the Worldview Conference, April 14

“I’m sure you’ve heard this idea, this phrase, that it ‘takes a village to raise a child,’” said Wilcox, who is director of the National Marriage Project and serves as an associate professor of sociology at the University of Virginia. “I would just add to that, ‘It takes a married village to raise the child.’”

Those who care about eradicating poverty and increasing the opportunities for America’s children should care about the health and stability of America’s marriages, he said.

“There is a strong link between family structure and the American dream at the community level,” he said. “The communities that have more married families … are more likely to facilitate the American dream – that is, the likelihood that poor kids will make it up the income ladder as adults.”

Thus, strong marriages make strong families, which create healthy communities. But what makes a strong marriage? According to Wilcox, sociological research shows that shared prayer between spouses—and not only while saying grace at meals—is the most powerful predictor of marital strength and stability.

In a second presentation, Wilcox said that young people today often “wander toward the alter,” rather than being intentionally prepared by others for marriage.

“I don’t think we’re necessarily doing a good job in serving the next generation in thinking about how they can prepare for marriage and life down the road,” he said. “In fact, our universities, our colleges and churches have largely abandoned the task of … courtship.” By courtship, Wilcox meant the ways that, in previous years and in other cultures, society has “guided people into marriage.”

“So when it comes to courtship and dating today in this culture,” he said, “our young men and women are often left clueless and confused.”

During his presentation, Wilcox outlined a series of practices that young people should follow before marriage—dating and courtship practices that sociologists have linked with healthy marriages. Among other things, young people should look for a spouse who has a common faith, and they should commit to that person. Moreover, they should be virtuous and look for a virtuous spouse, as well as surrounding themselves with a strong network of friends and families who are supportive of their relationship.

Wilcox encouraged Missouri Baptist churches to take seriously their role in helping young people find a spouse in a way that will lead to god-honoring, healthy marriages.