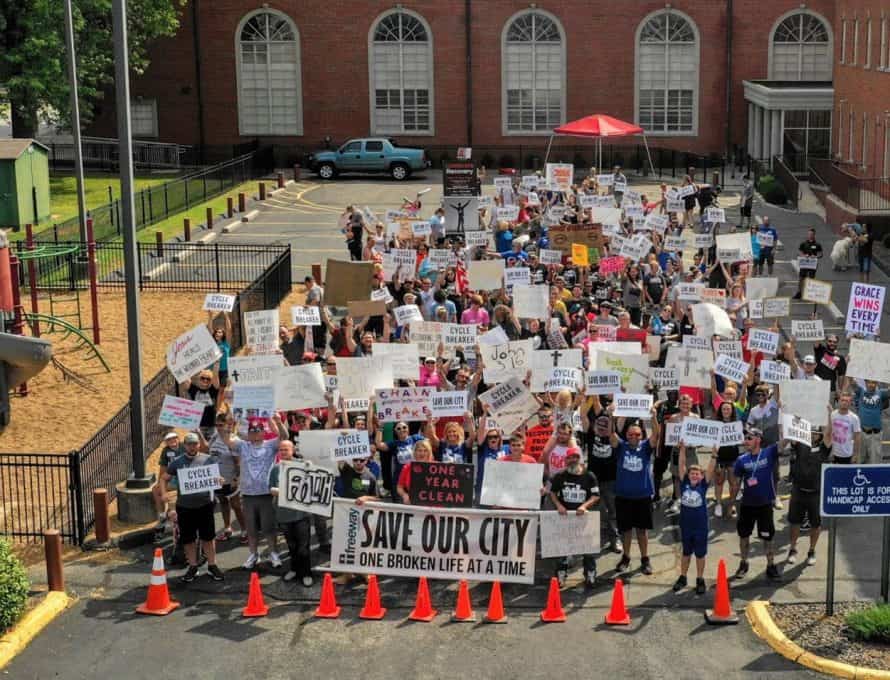 The march was part of the annual “Save Our City” revival organized by Freeway Ministries, a Springfield-based outreach and discipleship ministry to ex-cons, drug addicts and other hard-to-reach people. Co-founded by John Stroup, Mike Aye and Rick Lechner, members of Crossway Baptist Church here, the ministry has expanded throughout Missouri, into Nebraska, and across the globe – with a branch in Capetown South Africa.

The “Save Our City March” called the community to fight for the recovery of alcoholics and drug addicts, and it let those struggling with these vices know that they’re not alone.

“Drug addicts are very valuable people, and if you can get one of them on the right track they can make a big difference in this world,” Stroup told KY3 news after the march.

Stroup testifies that the grace of God changed his own life.

“I was raised in a drug-addict, drug-dealer environment,” Stroup told The Pathway. “Everybody I knew is pretty much dead or doing life in prison.”

In 2008, Stroup was serving time behind bars when he found a Bible and began reading it. He wanted to know what God did with bad guys. He discovered that, according to Scripture, all people are sinners. He also saw that God transformed their lives.

“That’s good news to a bad guy,” Stroup told a crowd gathered for revival at Concord Baptist Church, Jefferson City, Sept. 29 – Oct. 2. Stroup shared how God turned his own life around and soon called him to the ministry.

“This month marks ten years that I have been out of prison, and eleven years that I have been saved and sober,” Stroup wrote in a Sept. 26 Facebook post announcing the revival. “I have prayed that one day God would send me back to the place I come from, and Sunday I get to walk into the pulpit for a four day revival in Jefferson City, Mo! The city where I was known as a menace to society, chased by the police, strung out on the needle, homeless, and so on. I am coming back with a Bible in my hand to tell the world that Jesus saves!”