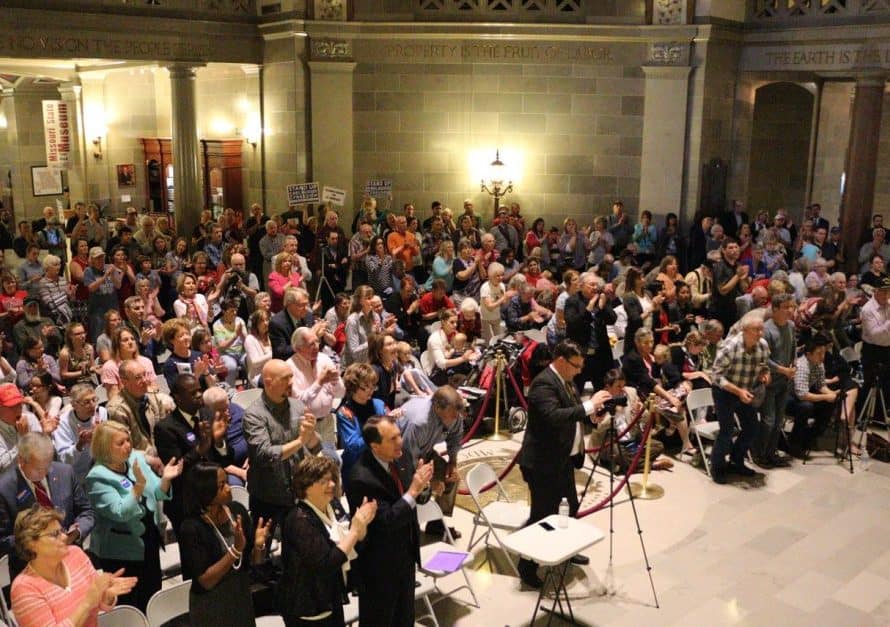 JEFFERSON CITY – Filling every square-foot of the Capitol Rotunda and with many looking on from the balconies above, more than 300 people swarmed Missouri’s State House, April 19, in defense of religious liberty and in support of the Senate Joint Resolution 39 (SJR 39).

Standing ovations punctuated the rally as various leaders and lawmakers defended SJR 39, also known as the Missouri Religious Freedom Amendment, and urged the crowd to tell their elected leaders to pass SJR 39 without amendments and to “Let the people vote!”

A vote for SJR 39 in the House would mean the constitutional amendment would be put to a vote of the people, most likely the Aug. 2 state-wide ballot. First, however, it needs to pass two committees in the House of Representatives, and then a final vote by the entire House. SJR 39 passed the Missouri Senate, 23-9, last month. Those who were unable to attend the rally can contact their representatives in the House via the lookup tool at www.religiousfreedomforall.com.

SJR 39 is a narrowly written bill, and – in the words of several at the rally – it is “a shield, not a sword.” It prevents state and local governments from imposing penalties on clergy, churches, religious organizations and some wedding vendors which, for religious conscience reasons, wish not to participate in a wedding involving two people of the same sex or gender.

It does not apply to any other businesses, and it protects people of all – or no – faiths.  It does not provide protection for individuals, corporations, or religious organizations who discriminate against individuals on the basis of sexual orientation or gender identity. It does not protect any non-religious, for-profit business, unless the business is closely held and the business is asked either to participate in a same-sex “marriage” or wedding ceremony or to provide goods and services that reflect creative or artistic expression for the “marriage,” wedding ceremony, or ensuing celebration. It does not prevent state or local government from providing a marriage license or other government entitlement to same-sex couples.

A sample of what was said at the rally:

“Government neutrality regarding faith and conscience is necessary in a democratic republic, neutrality that is clarified by SJR 39. To say otherwise means you have not read the bill. … Once you cut through all the sound bites and the chatter and actually read SJR 39, you discover that it protects religious liberty for all.”   – John Yeats, executive director of the Missouri Baptist Convention

“In a nation of free people, there will be diversity of religious beliefs and practices. The government is restricted from establishing a state religion or limiting the free exercise of religion by its people, whether that religion is Christian, Jewish, Buddhist, or secular naturalism. Special interest groups are seeking to undermine these guaranteed liberties by insisting that certain behaviors must be celebrated by all, even when they are contrary to the sincerely held religious beliefs of some. That’s why this bill was written; not to deny anyone equal rights, but to safeguard rights. So we say to the House of Representatives, ‘Let the people vote!’” – John Yeats, executive director of the Missouri Baptist Convention

“I don’t see hate coming from our side in this battle. … We’re fighting for a neutral principle that is applicable across the board to all comers. It’s neutral philosophically and neutral morally. … We must go forward humbly to stand up for the rights of all Missourians and our right to decide this issue at the ballot box.” – Lt. Governor Peter Kinder

“SJR 39 is very simple and carefully crafted to safeguard those who are currently vulnerable, but at the same time to avoid unintended consequences of broader bills. It is very much in the spirit of tolerance and pluralism embodied in the First Amendment of our Bill of Rights. … Not if – but when –  SJR 39 passes the House with the help of your lobbying efforts, it will go to a vote of the people to protect to religious freedom in our state.” – Senator Bob Onder, R-St. Charles

“The only reason this building exists is to help keep the people free. … If the government exists to keep the people free, and you’re not doing anything to deprive other people of their freedom, then the government – whether it’s the Missouri State Legislature or in Washington, D.C. – has absolutely zero natural jurisdiction to regulate, govern, or punish you just for what you believe.” – Representative Paul Curtman, R-Union

“We are facing a choice now about the very fundamental character of our nation. What kind of a people are we going to be? What kind of a constitution are we going to have? We know that at the root of all our freedoms and the Bill of Rights is the fundamental right to conscience, the right to liberty of belief, and the liberty to follow God and worship as He guides each one of us in our lives.” – Joshua Hawley, candidate for attorney general

“It’s time for Missouri to do its part. The fight for religious liberty is a fight for our Constitution and our very character as a nation. It is not only our challenge, it is our opportunity and great pleasure to stand together as a state for the fundamental rights of our Constitution. Let your voice be heard!” – Joshua Hawley, candidate for attorney general