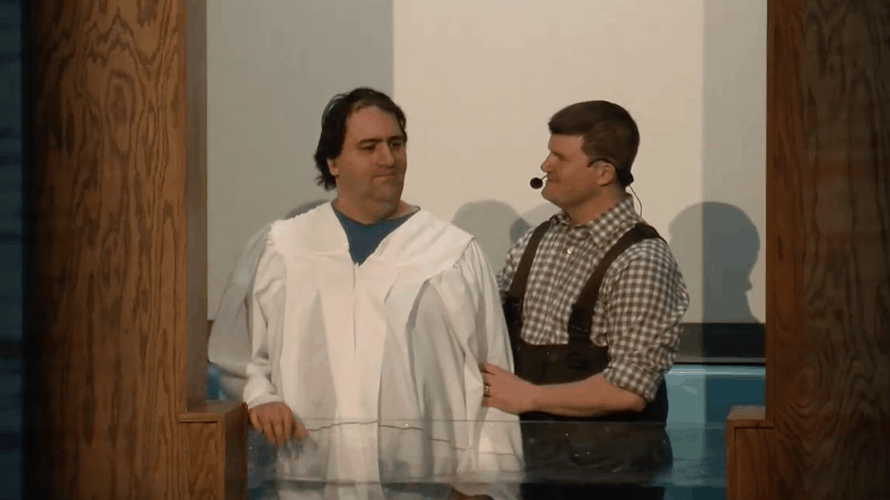 LEBANON - A few months after First Baptist Church, Lebanon surprised him with a $1,000 gift while he was delivering a pizza, Robert Marsh accepted Christ and was baptized. Photo via Facebook screenshot.

LEBANON – It was initially meant as a random act of kindness, but the $1,000 tip First Baptist Church, Lebanon gave Robert Marsh on a $10.74 pizza on Christmas Eve started a conversation that ultimately led to his conversion and baptism.

A video posted to the church’s Facebook page that has been viewed more than 13,000 times tells the story (Search for “FBC Lebanon” in Facebook’s search bar to watch the video).

“What’s the biggest tip you’ve ever received?” Matt Taylor, pastor of First Baptist asks Robert Marsh, who thought he was on a standard, run-of-the-mill pizza delivery run. “$10,” Marsh replies, before Taylor gives him $1,000 from a love offering taken by the church. I hope you know there’s a God in Heaven who loves you and that He sent His Son for us and for you.”

“We didn’t know you were going to deliver our pizza, but wanted to give you a Christmas present,” Taylor said.

The story of generosity and Christmas cheer is fine on its own, but Taylor and others at First Baptist got to know Marsh and his wife, Linda, over the next few weeks. The viral video picks up with Taylor and Marsh not holding a pizza, but standing in a baptistery.

Robert did not know Christ, Taylor says in the video, “and it became very, very clear to me that of all the Domino’s Pizza guys, God sent him our way.”

After a few lunch meetings, Taylor gave the couple a tract and asked them to read over it and see if they had any questions. At the next lunch meeting, they sat and discussed the gospel for more than two hours and about how to enter into a relationship with Jesus.

“You can give your life to Jesus right now,” Taylor told him.

“I’m about 99 percent sure that’s what I want do, but there’s just something holding me back,” Marsh told Taylor. “To make such a big decision, it seems like there needs to be a witness to it.”

Taylor explained that a relationship with God didn’t need any outside observer to make it any more real, but that he was there and willing to guide Marsh if he sensed God’s Holy Spirit calling him to repent and accept Jesus.

“I’ve led people to the Lord in my 25 years as a Christian, but I’ve never seen anyone struggle as much as Robert repeating a prayer back,” Taylor said. “At first, I thought he was hard of hearing. It finally dawned on me that Robert was contemplating every word he was about to express back to the Lord, and he was thinking about them before he said them. Then he would take my words and make them personal for him. After that I looked up and he said, ‘I feel different!’ I told him, ‘Robert, you couldn’t be any more different than what you’ve just become in Christ!’”

The next day Marsh showed up at the church to get a Bible, and couldn’t wait to tell Taylor “I’ve already declared it to three people; I’ve found God!”

The video ends as it began, with Marsh standing in front of the crowd at First Baptist Church. It’s possible his smile at the close of the video is even bigger than at the beginning when he was handed $1,000.

“It started out as a cool story of a one-time, random act of kindness, but today you get to see Robert Marsh be baptized,” Taylor said.