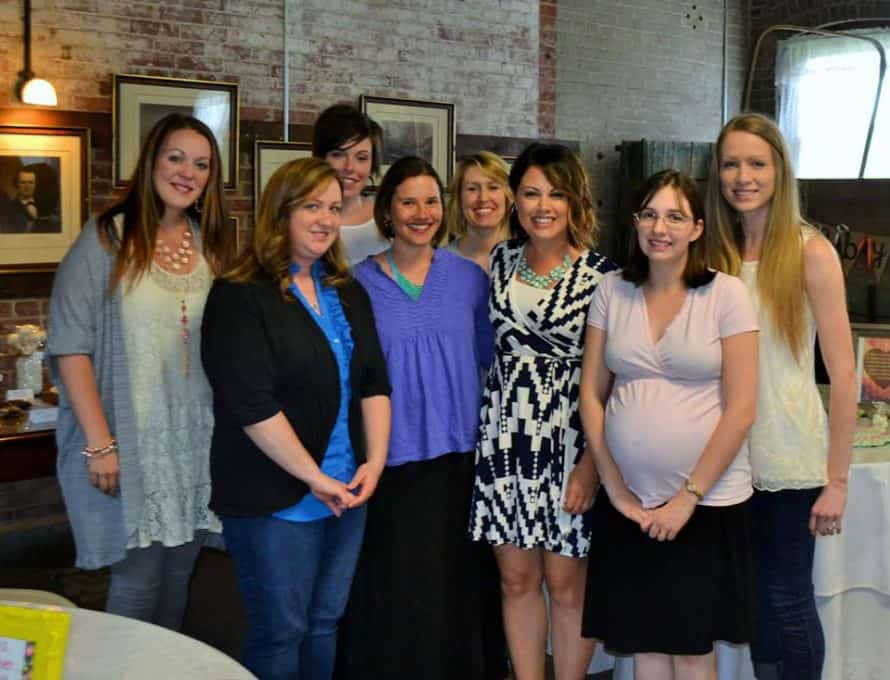 KANSAS CITY – Krystalle Wheeler and other women who have experienced the grief of infertility or of losing a baby gather once a year for a tea party to encourage one another. Photos courtesy of Krystalle Wheeler.

INDEPENDENCE — There’s no way adequately to describe how a mom feels when a baby dies within her womb.

“Disheartening” is the word Krystalle Wheeler, a member at Noland Road Baptist Church here, used when sharing about what it was like to feel her daughter, Gracia, die after carrying her for nearly 24 weeks. “My womb swelled,” she said, “and her movements lessened.”

“There is nothing normal about cemetery shopping for your child,” she added. “Our oldest was 3 at the time, and she picked out Gracia’s cemetery because she thought all the flowers were beautiful. She found beauty in a place of death.”

Amid her daughter’s death, Wheeler found hope in God. He kept her “steady during a very uncertain time,” she said. “I couldn’t count on anyone or anything to lift me up but Him.”

As she leaned on the Lord for comfort during her loss, Wheeler envisioned a ministry to help other women turn to God amid their grief. Soon she shared the idea with Francis O’Donnell, senior pastor of Noland Road Baptist Church, and with the church’s support a new ministry was born. The ministry, Lullaby of Hope, is only one of 14 local missions that Noland Road Baptist supports to transform lives in the community.

“Lullaby of Hope is a picture of God the Father singing a song of hope over His broken-hearted daughter,” Wheeler said, explaining that the ministry’s name was inspired by Zephaniah 3:17. “Just as we sing lullabies to our babies, He sings over us.”

Lullaby of Hope sends hand-crafted gift baskets around the nation to women who are struggling with infertility or who have experienced the loss of a child through miscarriage, still birth or infant loss. The ministry team with Lullaby of Hope includes women who have experienced both infertility and the loss of their babies, and the baskets are crafted very intentionally to encourage women amid their pain. People can request a basket at the ministry’s Facebook page, www.facebook.com/lullabyofhope.

Wheeler also said that she and other team members from Lullaby of Hope are willing to speak to the WMU and other groups around the state to help raise awareness about grieving parents  and those struggling with infertility, who are all-too-often overlooked.

While many people are able to move on with life after a baby’s death, for those who have lost a baby, the pain by no means disappears over night, Wheeler said.

“There are daily reminders that these women face,” she said. Getting formula and other parenting resources in the mail, seeing other people celebrate healthy pregnancies and births, special occasions like Mother’s Day or the anniversary of the baby’s funeral—each of these can remind a woman about the “searing pain” of losing a child. In a blog post last December, Wheeler confessed that she still remembered the loss of her baby.

“As Gracia’s anniversary approached this year, I felt like the only one who remembere her,” she wrote. “And for a second, I thought it would be easier for me to not remember too.”

Yet Wheeler also recognized that, through her death, her daughter “has impacted many people’s lives.”

“Because of Gracia’s death,” Wheeler wrote, “I started Lullaby of Hope. … Her one death has allowed me to step into many women’s lives when they are broken and to speak hope over them and point them to Jesus.”