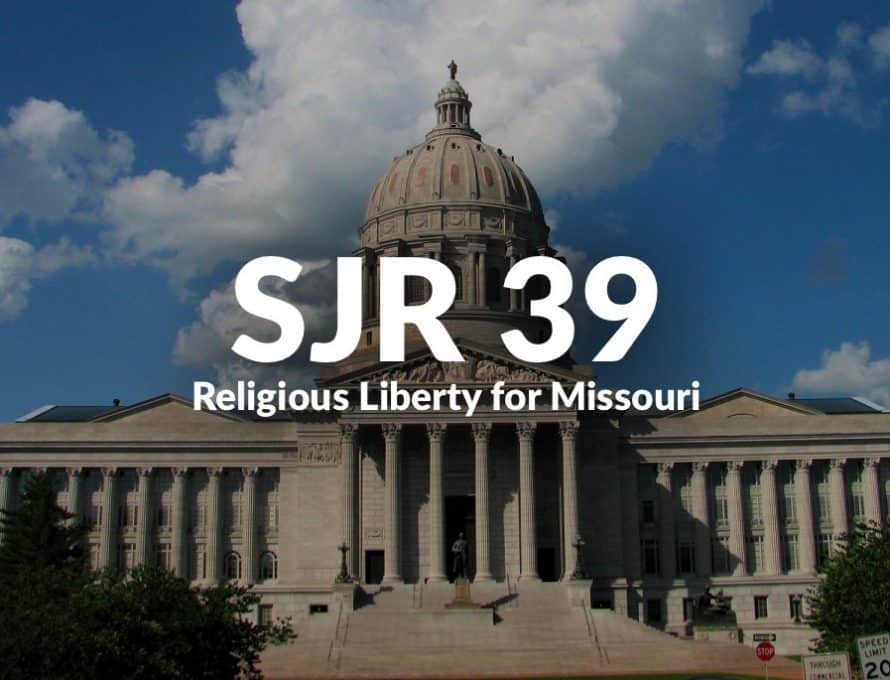 JEFFERSON CITY – Missourians would vote on protecting people from being penalized for their religious beliefs on marriage if a resolution passed by the Missouri Senate this morning (March 9) is next passed by the state’s House of Representatives.

President Pro Tem of the Senate Ron Richard broke a 39-hour filibuster of Senate Joint Resolution 39 (SJR 39), also called the Missouri Religious Freedom Amendment, by calling for the previous question. In accordance with Senate rules, members of the Senate then took a 7 a.m. roll call, and SJR 39 passed its first-round approval, 23-9.

SJR 39 now heads to the House of Representatives for approval for the ballot box this fall. If voters approve the resolution, it will be added to the Missouri constitution. The resolution’s legislative process does not require the signature of Gov. Jay Nixon.

Drafters of SJR 39 insist that the amendment “is a shield, not a sword” – intended not to attack any group of people, but simply to provide religious liberty protections for people of any faith following the U.S. Supreme Court’s ruling in favor of same-sex marriage last summer. SJR 39 would protect the religious liberty of pastors, churches and other religious organizations as well as business people who use their creative abilities within the wedding industry.

Ronnie Floyd, president of the Southern Baptist Convention, affirmed the Missouri initiative. “All Americans need protection from any threat or any violation of religious liberty,” said Floyd, senior pastor of Cross Church in northwest Arkansas. “Southern Baptists have always championed the freedom of religion in America; therefore, we pray that Missourians will support this common conviction that ignited the birth of our nation years ago.”

Frank S. Page, president of the Southern Baptist Convention’s Executive Committee, stated, “I applaud this effort by the people of Missouri to preserve our First Amendment rights.

“Local and state governments continue to assault the religious rights of men and women who believe marriage is the union of a man and woman. Government has no right to coerce business owners who believe a wedding ceremony is an act of religious worship to provide their services for ceremonies that violate their religious convictions. Penalizing such business owners is a chilling violation of the free exercise of religion. It must stop,” Page said.

Missouri Baptists have strongly supported SJR 39, sponsored by Sen. Bob Onder of Lake St. Louis, from the bill’s inception. Several were among a crowd of religious liberty defenders at a Senate committee hearing on the bill Feb. 29.

But they weren’t alone. Supporters also included – among others – George Paul Wood, coordinator of Religious Freedom Initiatives and executive editor of AG publications and son of the general superintendent of the Assemblies of God (USA), as well as Ashley McDonald, who represented the Missouri Farm Bureau. The day after the Senate committee hearing, Mike Hoey, communications director with the Missouri Catholic Conference, also announced the Catholic leaders’ support of the bill.

The threat to religious liberty, Krueger said, has come from “a new moral and legal order” that is aiming to normalize same-sex marriage in the United States.

“Missouri needs a Religious Liberty Amendment that protects the religious liberty rights of its citizens,” said Krueger, pastor of First Baptist Church in Linn. “This amendment is not – let me repeat – this amendment is not a license to discriminate against protected classes of people. It is a shield, and not a sword.”

The bill would be a “shield” for churches like Open Heart Baptist Church of Columbia, Bonnie Lee told the Senate committee. Open Heart – like many other churches – wants to serve the community with its facilities, she said, but church leaders and members fear that, by opening themselves up to the community in this way, they are also opening themselves up to legal attack because of their biblical beliefs about marriage.

“I appreciate that Missouri would stand up and let us feel comfortable and let us exercise that faith,” Lee said. “I appreciate so much a bill from our state that protects our freedom of religion.”

Michael Whitehead, legal counsel for the Missouri convention, reminded the committee that religion is not confined to the worship center or to private Bible study, but that religious beliefs affect every aspect of people’s lives.

Don Hinkle, editor of the Missouri convention’s Pathway newsjournal and MBC public policy adviser, told the committee that Baptists have historically been at the forefront of defending religious liberty. For example, after years of facing jail time for preaching without governmental permission, colonial Baptists were among the first to support the U.S. Bill of Rights.

“This has always been probably the most important issue to us,” Hinkle said. “It is who we are.”

John Yeats, executive director of the Missouri convention, said after the Senate’s approval of SJR 39: “This bill is a very important piece of legislation. We are very grateful for all the Senate leaders engaged in its passage. Despite how this bill is spun in the public (such as anti-gay) this bill cuts both ways in guaranteeing religious freedom for all.

“With the passage of the amendment by the citizens of Missouri, the government cannot be used to coerce religious expression in churches, in institutions and the marketplace. Let’s encourage members of the Missouri House to pass this measure quickly,” Yeats said in a written statement.

Missouri Baptists have a long history of defending religious freedom, adopting 12 resolutions in its defense since 1976. This includes a 1990 resolution celebrating the 200th anniversary of the Bill of Rights, which affirmed the right to believe that “religion flourishes best without government’s interference” and promised to defend this “fundamental principle” in years to come.

In a 2014 religious liberty resolution, the convention called on Missouri Attorney General Chris Koster to defend a state constitutional ban on same-sex marriage that was passed in 2004 by a 71-29 percent margin. This portion of the Missouri constitution now has been overturned by the U.S. Supreme Court’s same-sex ruling.