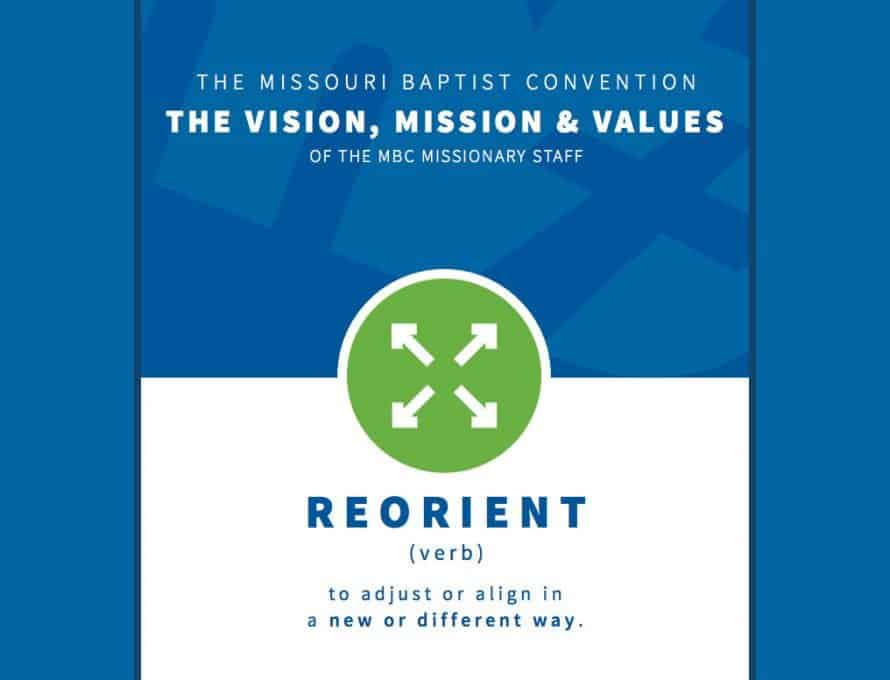 JEFFERSON CITY – A new booklet explaining the reorientation of the MBC staff is now available as a free downloadable file at mobaptist.org/transform.

“Reorient: The Vision, Mission & Values of the MBC Missionary Staff” begins with a message from Executive Director John Yeats.

“The vision of the MBC staff is both simple and compelling: Transforming lives and communities with the gospel,” he writes. “The mission of the MBC staff explains how your state missionaries strive toward this preferred future: Cooperating with Missouri Baptists to make disciples, multiply churches, and develop leaders.”

The booklet then highlights the process by which the MBC staff developed and implemented its restated vision and mission. This includes:

A sense of urgency. Despite the MBC staff’s best efforts to offer a wide variety of resources and services to Missouri Baptists, the results as measured in baptisms, worship attendance, and other traditional metrics have been trending downward for years. Change was imperative.

A painstaking process. The MBC staff determined to take a hard look at how they allocate the resources entrusted to them by Missouri Baptists. Several years ago, they began calling out to God to search their ways and grant them wisdom. Then, they invested thousands of hours in fact finding, research, and intense discussion.

A historical perspective. In 1835, Missouri Baptists adopted a constitution for the newly formed “Central Association,” a forerunner of the MBC. The association’s stated goal was to “adopt means and executive plans to promote the preaching of the Gospel in the destitute churches and settlements within the bounds of the state.” That historical perspective helped anchor the MBC staff in the reorientation process.

The booklet then details the vision and mission of the MBC staff, along with the staff’s core values and strategic anchors.

Yeats summarizes: “The bottom line is that MBC missionaries are seeking to be the best possible stewards of the resources Missouri Baptists have entrusted to us; to carry out their historic mission of making disciples, multiplying churches, and developing leaders; and to strategically lead all Missouri Baptists to transform lives and communities with the gospel.”