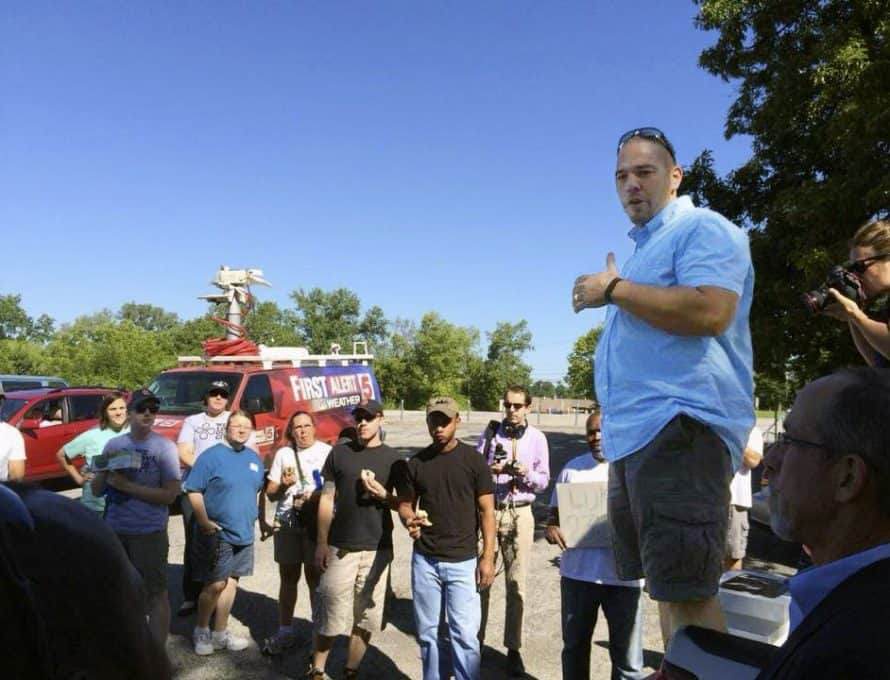 FERGUSON – Joe Costephens, pastor of The Passage, located in suburban St. Louis, talks to Ferguson residents during a cleanup project on Wednesday, Aug. 13, 2014. NAMB photo provided by The Passage.

FERGUSON – “Double” has an impact on the future for the First Baptist Church of Ferguson/Passage Community Church replants. “Both congregations have joined together,” Joe Costephens, lead pastor, said, “to bring the most glory to God and to do what we were created to do as the body of Christ, to represent Him.”

Stoney Shaw, former pastor of FBC Ferguson, described a new attitude in the unified church. “It gives the church new life and it sets the people free to reach out even more to the community.”

Shaw described the foundation of the two churches coming together as beginning two years ago. “Ron Beckner (former associate pastor) and I met with some of the church leadership,” he said, “and we identified a need to attract younger people to the congregation. After much prayer, Ron and I decided that we would step down, but stay until a new pastor came on board.”

According to Costephens, several people encouraged him to contact the pastor search committee. “I submitted my resume,” he said, “but, I also told them that I didn’t feel God was leading me away from Passage Community Church.”

Shaw said the Search Committee explored many resumes. “The committee decided not to bring a man,” he said, “but, to bring a process which would include bringing in the other church.”

Costephens is quick to point out that this is not a merger. “It is not a big fish swallowing a little fish,” he said. “We are replanting and growing together,” he said. “We are a group of brothers and sisters agreeing to move forward together for others to meet Jesus and to grow in faith.”

Costephens highlighted some of the strengths of each of the congregations. “Ferguson’s strength is in many of the programs like Bible Study and AWANA,” Costephens said. “We want to enhance some with a more missionary focus like the senior luncheon. We’ve got the space to do a luncheon and a senior adult worship during the week to reach out to retired Christians and non-Christians.”

According to Costephens, worship is a strength for Passage. “We worshipped well corporately and privately,” he said. “Also, we are loving in community groups with accountability.”

Shaw agreed that relationships were strong at Ferguson. “Unity and love help us reach out to the community. We used the building to serve more than 1,000 children during Trunk Treats.”

Having a building does open new doors Costephens said. “More people drop by, there is a constant flow,” he said. “We want to realize the building is a tool and not the prize. It is a resource and not the kingdom.”

Shaw and Costephens agreed that getting the church out into the community is the most important goal. “Several stories lately by church members have been so encouraging,” Costephens said. “They have tried to share their faith with more people. That’s what we need to be about.”

The new mission statement for the congregation is to “Love God, Love Others and Serve the Community.”

“By serving the community,” Costephens said, “we show we care about people and we build credibility to share the gospel.”