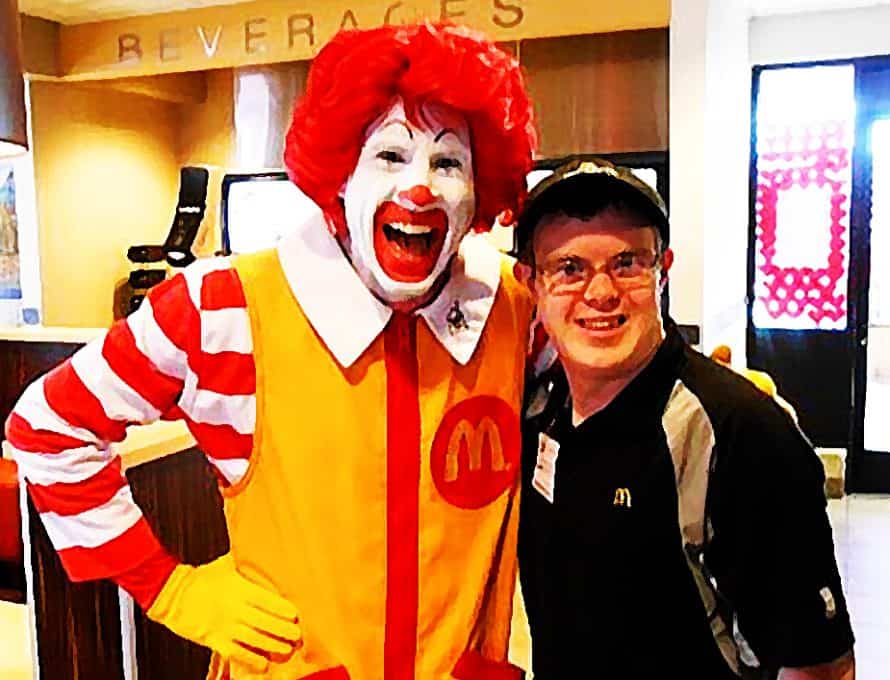 MARSHFIELD – Ronald McDonald stands beside TJ Slocum, a member of Timber Ridge Baptist Church, during McTJ night here. With a heart to serve God and others, Slocum, a 25-year-old man with Down Syndrome, has raised tens of thousands of dollars for the Ronald McDonald House of the Ozarks. Photo courtesy of Slocum family.

MARSHFIELD – As TJ Slocum took his place behind the microphone that Sunday morning, he looked out at the congregation of Timber Ridge Baptist Church. Every church member looked up at him expectantly; each with a warm smile on his or her face.

TJ’s song selection that morning was “Whom Shall I Fear (God of Angel Armies)” by Chris Tomlin. He loves to sing Chris Tomlin songs.

“He’ll get up there and sing his heart out and the beauty of it is he’s not doing it to hear himself sing; he’s doing it for Jesus,” said Wayne Taylor, pastor at Timber Ridge. “Maybe he missed a note or whatever; it doesn’t matter. Jesus wants worship from the heart and TJ’s willingness to go out there encourages other people, reminding them it doesn’t have to be perfect if you’re doing it for Jesus. The Lord will bless it and use it if we’re serving Him and not ourselves.”

TJ, 25, has Down syndrome, a genetic condition caused by the presence of an extra chromosome 21. He was also born with a heart defect, and has been through 11 different surgeries and procedures throughout his life.

“TJ is a strong and positive person,” said Randy Slocum, TJ’s father. “The church has always accepted him and stood behind him no matter what TJ wants to do. They don’t put limitations on him. People often come up and tell me what a blessing he is and I can’t believe how many lives he’s touched in 25 years.”

And singing special music is just one way that TJ serves Timber Ridge. He is also the youth teacher’s assistant, he is the first person to sign up for church service projects, and he serves faithfully as the church’s Offering Coordinator.

“At our church we have the kids take up the offering because we want our children to feel like they can serve, too,” Taylor said. “Anyway, TJ is in charge of the ushers and making sure everyone gets a turn and that it’s done correctly.”

Though he is as involved as anyone at Timber Ridge, TJ’s heart for people and for ministry doesn’t just stay within the walls of the church.

TJ works for the McDonald’s in Marshfield and every year during its February Share A Heart Campaign he works to sell the $1, $5 and $20 paper hearts. Since he started working there eight years ago, TJ has raised more than $58,000 for the Ronald McDonald House of the Ozarks.

“The McDonald’s even has a McTJ Night every year,” Slocum said. “The money he makes goes to the Ronald McDonald houses in Springfield. A lot of people come and support it and it’s just an awesome blessing to witness.”

TJ is also a devoted volunteer for Marshfield High School’s boys’ athletic teams. He helped while attending school and since graduating he’s continued to be the manager.

“For football he’s the water boy and for baseball he’s the bat boy, but more than anything he cheers the teams on and peps them up when he can,” said Debbie Slocum, TJ’s mom. “We thought maybe when he graduated all TJ’s activities would slow down. It hasn’t slowed down at all.”

Taylor said his impact in the community is an obvious example of TJ’s genuine love of people. He said the Timber Ridge has learned a lot from watching TJ in action.

“Everybody in the church loves him so much and our people would go to the ends of the earth for him,” he said. “He shows us how to love others and accept everybody. Though he never set out to do that, his unconditional love reminds us of what it’s all about. We are so blessed to have him.”

Slocum said Timber Ridge doesn’t see TJ as a person with special needs, they see him as the special person he is.

“A couple of years ago we built an apartment area onto our house for TJ and a lot of people from church came and helped us build it,” Slocum said. “On the wall in his living area is the scripture verse, ‘Man looks at the outward appearance, but the Lord looks at the heart’ (1 Samuel 16:7). This scripture fits TJ in so many ways.”