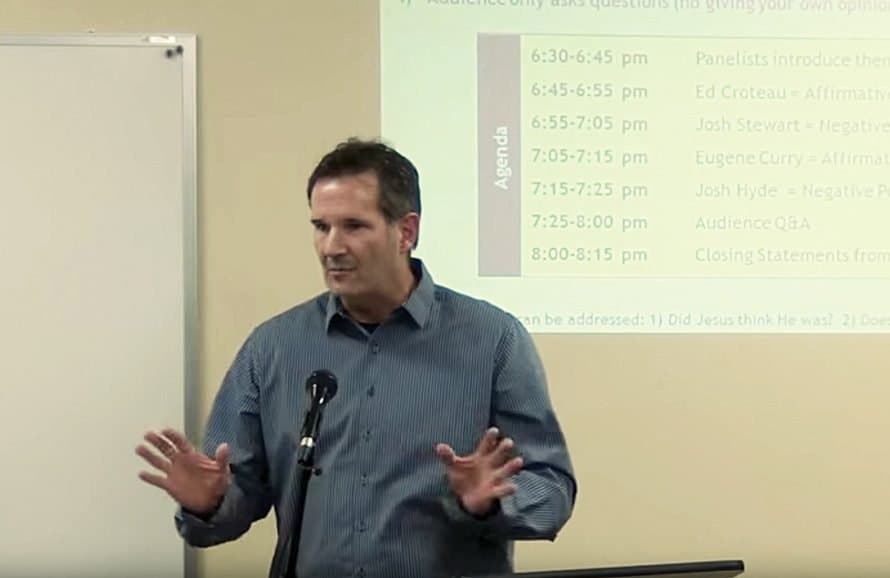 Two strangers from a local church knocked on Ed Croteau’s door about 25 years ago. As a Catholic, he had always heard Jesus described as the Son of God, but for the first time, they explained that Jesus was God. Croteau and his wife Jo were overcome by the presence of God and gave their lives to Jesus Christ as their Lord and Savior.

“Since then, I cannot put the Bible down. I just love God’s Word,” said Croteau, who is a member of Abundant Life Church in Lee’s Summit.

An engineer by training and a statistician by trade, Croteau was naturally attracted to apologetics.

“I keep looking for opportunities to share with people and to discuss with them that the Christian worldview is the most reasonable and truthful way to live,” he said.

His mission expanded about 10 years ago when he attended a parents meeting at school when his son took a biology class that taught evolution. He felt called to actively reach out to his community.

So, he formed friendships with nonbelievers and hosted a volleyball tournament between the Kansas City Atheists Coalition and Abundant Life Church. He’s participated in numerous debates and open Q&A forums in homes and colleges, defending the Christian worldview on topics such as “Does God Exist?”

He’s found that the arguments of unbelievers just don’t add up and they often expect Christians to be weak-kneed and unable to stand up for their beliefs.

“The ministry that I do is focused on one person – Jesus Christ. Everything we discuss with the secular community always points to the Word of God as the source for truth, using rationality to show other arguments are false,” Croteau said.

Put what you believe out in the open and it will make you stronger. – Ed Croteau

He also writes a weekly column, “The Evidence of Faith’s Substance,” in the Lee’s Summit Tribune, hosts a website by the same name and teaches a weekly evening class to all in the community on how to share the gospel in today’s secular culture.

At Abundant Life Church, Croteau teaches teenagers in Sunday school and wants to give youth an example of how to defend their faith. He challenges them to examine their beliefs.

“Put what you believe out in the open and it will make you stronger,” he said.

Croteau has written five books and leads a 31-week session at Abundant Life where he invites believers and non-believers alike to explore the big questions. He is available to lead sessions on any of the five general themes: worldviews; origins of man; reliability of the Bible; the Person of Jesus Christ; and God’s will for your life.

His web site at faithsubstanceevidence.com includes many of his lessons.

“There’s so much to say about who Jesus Christ is and the impact He can have on your life,” he said.

The MBC has launched the Missouri Baptist Apologetics Network, a group of church leaders committed to the defense of the Christian faith and called to equip believers to more effectively share their faith. More information is available online at mobaptist.org/apologetics.