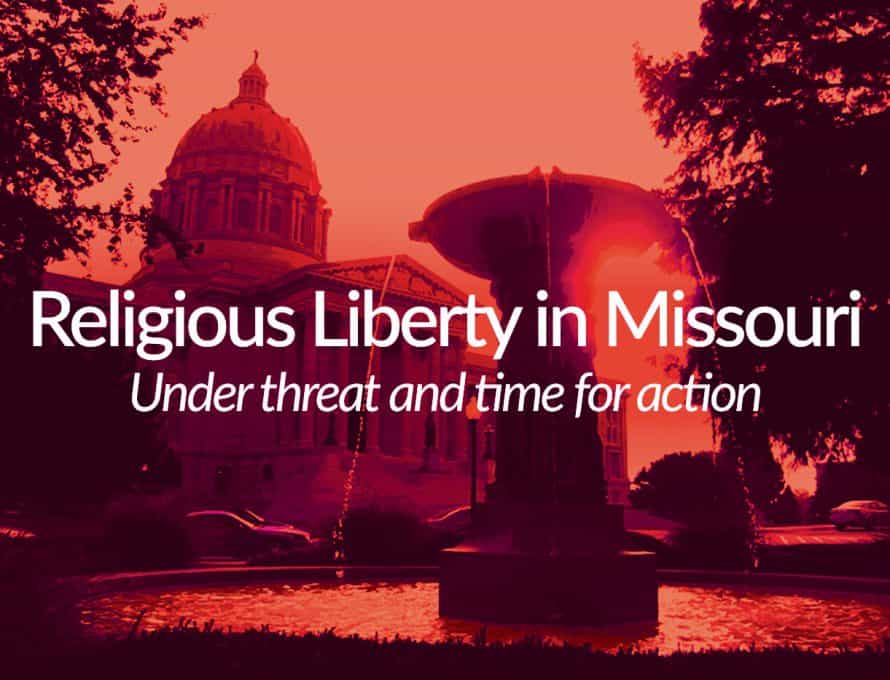 As attacks on our religious liberty have intensified in recent months, Missouri Baptist Convention Executive Director John Yeats asked me to spearhead a statewide multi-faith initiative that would further secure religious liberty for Missourians. For the past three months I have had the privilege of being a part of a broad coalition of church leaders, legal scholars, State Capitol staffers, lawmakers, pro-family and religious liberty groups in crafting legislation that would respect and guarantee religious liberty in five areas: For clergy, churches, institutions, student campus groups and business owners.

The Missouri Religious Liberty Coalition have been periodically meeting at the Baptist Building since August, and I am hopeful that it will culminate with a proposed amendment to the Missouri Constitution when we gather for our final meeting Oct. 29. It is our intention to submit the amendment as legislation to the Missouri General Assembly when it convenes in January. If it passes the House and Senate then it will be placed on the ballot either in August or November for Missouri voters to approve.

The bill does not discriminate against anyone. Its sole purpose is to protect the God-given First Amendment rights of every Missourian – including the right to freely exercise one’s faith or to not exercise any at all.

The bill does not discriminate against anyone. Its sole purpose is to protect the God-given First Amendment rights of every Missourian – including the right to freely exercise one’s faith or to not exercise any at all. Those advocating for special LGBT rights, along with much of the liberal news media, will attempt to mischaracterize it as discrimination. Despite their views and often hostile reaction, it is important that we repeatedly assure them that this is about protecting religious liberty in Missouri and that it in no way infringes upon any of their rights. We also want to let them know we love them and seek to build relationships that respect differing views while maintaining a sense of friendship and mutual understanding.

While much of the media attention has been on business owners who want to run their businesses according to the dictates of their faith, the bill indeed must provide business owners with the freedom to live out their faith – even at their businesses. But the bill can also provide religious liberty protection in other important areas. These range from protection for clergy to faithfully preach the whole counsel of God’s Word to churches having the freedom to manage the use of their property in a way consistent with their faith. Student groups on our college campuses deserve the right to run their faith-based groups according to their particular faith – without penalty or harassment as well.

Missouri Baptist institutions are an important part of the ministry Southern Baptists offer.  Therefore the bill must provide protection for our schools and universities as well as the Missouri Baptist Children’s Home (MBCH). None of them should be penalized in any way by the State for conducting their business according to their faith. There are also secondary education schools that must also be protected.

The coalition that has been working on the bill is diverse. The Lutheran Church, Missouri Synod, the Worldwide Fellowship of the Assemblies of God and The Missouri Catholic Conference have joined Southern Baptists in this effort. It is expected others will soon join as the coalition reaches out to them. Groups like Eagle Forum, Missouri Concerned Women for America and the Missouri Alliance for Freedom are involved, and others are invited.

The primary author of the bill is Carl Esbeck, constitutional law professor, University of Missouri Law School. He is widely hailed as one of our nation’s most respected First Amendment scholars. Not only has he brought his considerable expertise to bear on our effort, but has also solicited – and received – input from other nationally acclaimed constitutional scholars from law schools at Stanford University, Notre Dame University and the University of Virginia. In fact, I have been blessed in our meetings to be flanked to two outstanding attorneys in Esbeck and Missouri Baptist Convention General Counsel Mike Whitehead of Kansas City, who is also an attorney with the Alliance Defending Freedom.

The coalition has worked diligently, and we ask that you join us in praying that God will honor our faithfulness to Him in this great task. God is indeed sovereign, but we bear personal responsibility. We have been blessed by God to have been born Americans and have been endowed with certain unalienable rights such as life, liberty and the pursuit of happiness. Our rights are not derived from the government, but from God. But the only government that exists is that ordained by God for our good and His glory. As free Christians in a free nation, may we fully exercise all of our rights in such a way that we bring honor and glory to God.