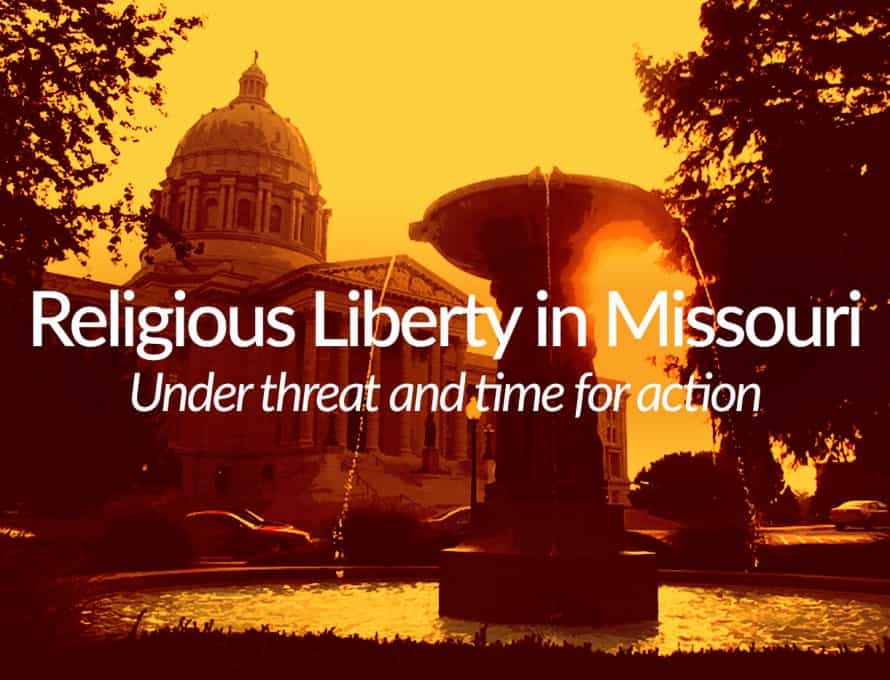 JEFFERSON CITY – It is coming to Missouri and if its citizens do not act soon, religious liberty for everyone will likely face an unprecedented threat.

Last month the Oregon Department of Labor ordered Melissa and Aaron Klein, owners of Sweet Cakes by Melissa bakery, to pay a $135,000 fine because they refused to bake a “wedding” cake for two lesbians. It is not because they hate homosexuals. In fact they have repeatedly stated and demonstrated their love for homosexuals. The state is punishing them because of their commitment to their Christian faith which prevents them from participating in, thus endorsing, any “wedding” that is not between a man and a woman.

The Oregon legislature passed a so-called civil rights bill in 2007 giving sexual orientation the same legal protections as religion, disability, race and gender when it comes to employment, housing and public accommodations. It provides an exemption for religious organizations, but the Oregon Labor Department ruled that exemption does not extend to private businesses.

It is coming to Missouri and if its citizens do not act soon, religious liberty for everyone will likely face an unprecedented threat.

Homosexuals, with some corporate support, are pushing for similar action in Missouri. They are exerting pressure on lawmakers, business leaders and, not surprisingly, political candidates in an election year as will be the case in 2016. In the past, some corporations — like Wal-Mart, Apple and Eli Lilly — supply thousands upon thousands of dollars to campaigns for influence. They have threatened to pull thousands of jobs out of states if lawmakers do not comply. Never mind the hypocrisy of companies like Apple who claim to support homosexuals, then do business in countries that behead them and throw them off roofs.

Yet the homosexual lobby is loaded with millions in cash and an army of well-prepared lawyers and lobbying organizations like PROMO in Missouri. Lawmakers in Arizona, Arkansas and Indiana have buckled under the pressure from pro-homosexual corporations and the homosexual lobby. They are supported by much of the news media which helps them frame the issue of religious liberty protection for business owners as “discrimination.” They reject the America’s long-observed concept of freedom of association. In Kleins’ case there are dozens of local bakeries willing to bake a “wedding” cake for the Oregon lesbians, an option they have rejected. As a result, the Kleins have closed their business, but are still facing the $135,000 fine by the state.

So what is the big deal?

The state of Oregon is punishing the Kleins in an attempt to coerce them into violating their conscience. In other words, they are not allowed to exercise their faith outside the confines of their church building. It is a blatant violation of their First Amendment rights and specifically religious liberty.

America has always been accommodating to faith, allowing for religious liberty unless the government has a compelling interest to restrict it. And even if the government has a compelling interest, it must seek the least restrictive means to satisfy that interest. That is the “test” the U.S. Supreme Court used in the Hobby Lobby case, which that company won against Obama Care. The Obama administration sued Hobby Lobby because its owners refused to provide abortion-causing drugs in the health care plan it provides its employees – something that would have violated the conscience of the Christian family that owns the company. The court ruled that employees could easily get the same drugs elsewhere, thus respecting the faith of the owners. This way, both sides were accommodated. In the case of the Kleins, the state is not accommodating to religious liberty. The government’s interest in applying the law equally could be reached by telling the lesbians to simply go to another one of a plethora of other local bakeries willing to bake their “wedding” cake. If there were no other options, then perhaps the Kleins might have to comply.

There is a movement in America to restrict the Church’s influence in the public arena. Hillary Clinton has used the phrase “freedom of worship” rather than “freedom of religion” as the First Amendment to the U.S. Constitution states. Do not miss the difference. She is saying we are free to worship in the confines of our churches, but we are not free to bring our faith into the public arena. For Christians this flies in the face of Jesus’ Great Commission. Clinton is not the only one to advance such a restriction on religious liberty. U.S. Sen. James Lankford of Oklahoma recently discovered that the Naturalization and Immigration Service has changed its documents to say “freedom of worship” rather than “freedom of religion.”

There is a movement in America to restrict the Church’s influence in the public arena. Hillary Clinton has used the phrase “freedom of worship” rather than “freedom of religion” as the First Amendment to the U.S. Constitution states. Do not miss the difference.

Satan wants to run the government and he will if God’s people do nothing to mitigate his influence. He will lie, cheat, steal and deceive those in authority in order to achieve his purpose. The Church’s commitment to engage in the public arena must be motivated by love for our fellow citizens (we know God’s way is the best way) and our faithfulness to God.

So what about Missouri?

For the past three months, the Missouri Baptist Convention has been hosting a series of meetings with leaders of other faiths, legal scholars, State Capitol staffers, pro-family and religious liberty groups to determine how to deal with the coming threat to religious liberty in Missouri. The meetings have been lively, productive and encouraging. It is hopeful that within the next few weeks a proposed state constitutional amendment — designed to protect the religious liberty of Missourians — will be submitted to the Missouri General Assembly. If passed, it will be placed on the statewide ballot next year for voters to approve.

From their inception, Baptists have always championed religious liberty, whether it was denied by a Pope or an English king and his military. Baptist preacher John Leland, whose name has been given to the Washington, D.C., building that houses the Ethics and Religious Liberty Commission of the Southern Baptist Convention, inspired James Madison to include religious liberty as Madison penned the First Amendment to the U.S. Constitution. The commitment to religious liberty was carried on by another Baptist preacher — Martin Luther King — during the Civil Rights Movement. In keeping with our Baptist forefathers, Missouri Baptist leaders are insisting on religious liberty protection for Missourians in five areas: Pastors, churches, their institutions, student faith groups on college campuses and business owners like the Kleins.

This effort will require every faith group in the state to mobilize like never before. It has been gratifying to see representatives of the Assemblies of God, the Lutheran Church Missouri Synod and the Missouri Conference of Catholic Bishops participating in the meetings at the Baptist Building. Other faiths are being invited to join and get involved. The effort to encourage lawmakers to pass the measure so that it goes to the voters is achievable if Missourians act by contacting their representatives by letter and phone and then voting when the time comes.

What are the chances of passage?

Religious liberty leaders in Missouri are cautiously optimistic about the General Assembly passing the measure so citizens can vote on it. There appears to be strong support in the House. There is significant support in the Senate, but the question will be is their enough to break a Democrat filibuster backed by a barrage of media screaming “discrimination” along with corporations threatening to withhold campaign contributions and pulling jobs out of Missouri.

Homosexuals do not want this on the ballot because polls show Missourians favor religious liberty by nearly 2-1 for churches, pastors, institutions, student campus groups and business owners. Instead they have sought victory through coercion via the judicial system and by bullying lawmakers. Polls suggest that voters will pass the measure if approved by the General Assembly.

The constitutional amendment is likely to be the chosen route by the religious liberty coalition meeting at the Baptist Building because it will bypass Gov. Jay Nixon, who would surely veto the measure. Most observers believe Secretary of State Jason Kander, a Democrat, will place it on the August primary ballot, the fear being that if it is on the November general election ballot it will boost conservative voter turnout.

The challenge for Southern Baptists

Southern Baptists are the largest evangelical group in Missouri. Churches must educate their members and encourage them to participate by writing and calling lawmakers at the appropriate time, giving money to the cause, conducting voter registration like never before, and then voting in numbers never before seen in Missouri. Missouri pastors must step up and lead on this. A loss will likely result in similar laws passed like that in Oregon, which will begin an erosion of religious liberty on a scale thought unimaginable by free Americans just a few years ago.

There may be some in the faith community who are concerned that such action by the Church could be detrimental to evangelistic efforts and send the wrong message to homosexuals that they are not loved. We must continue to reach out to homosexuals, loving them so much that we share God’s truth with them. Any manner of hate against any person is to be rejected and is not the motivation for the effort by the religious liberty coalition meeting at the Baptist Building. People of faith in America must affirm that God has blessed them by allowing them to be born in a free nation where “We the people” decide whether our government – as Romans 13 says is established by God for our good and His glory – will exalt the Creator or His creatures.

Pray and ask God what He would have you do at this critical hour.