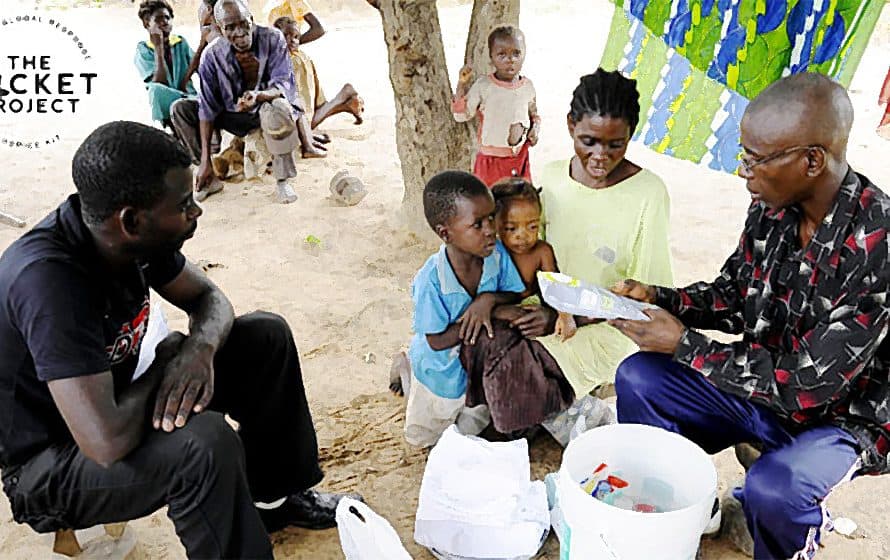 A family explores the contents of a Baptist Global Response "Bucket of Hope." BGR photo.

WASHBURN – Running for missions kicked off a generous summer of giving and activity for First Baptist Church of Washburn.

“We hosted the association meeting in January,” Jim Erwin, FBC Washburn pastor, said. “Several of our members attended and heard the presentation about the Baptist Global Response Bucket Project.”

Erwin explained that this project provides buckets filled with supplies to help AIDS hospice patients in Africa. Southern Baptist missionaries have asked for these buckets to provide an open door to build relationships and to share the Gospel.

“Our members were so excited to adopt this as our summer mission project,” Erwin said. “They wanted to do something different and they decided to start with a 5K run.”

Drawing from her own experience, FBC Washburn member, Connie Deans, thought the 5K run would be a great opportunity to raise funds and to get people involved in the project.

“I’ve participated in these,” she said, “and there is always a big turnout and they are held for a good cause. Everyone knew we were running for missions and we had 28 runners. We thought that was wonderful for our first run. In addition to the fee for the runners, we lined up several corporate sponsors. Each runner got a goody bag with some donated freebies.”

Erwin said the run was just the first of several mission-minded events for the summer. “I loved that it came out of the membership,” he said. “We’ve talked about thinking outside the box and not just doing the traditional evangelism opportunities. We want to reach young people and our members are thinking about that.”

In addition to the run, Deans was active in the Vacation Bible School later in the summer and the VBS offering also went to the Baptist Global Response Bucket Project. “We always have a mission offering during VBS,” Deans said. “We continued this year by sharing the need with the children. Also, at the end of the VBS, we had a small country store for the children to go in and buy small items for ten or fifteen cents.”

Erwin sees God working in all the activities for the summer.

“Our 5K run kicked it off,” he said. “Then, we had a successful VBS and we joined with other churches to do a soccer mission camp. We finished it off with a revival. As the culmination of this activity, we had twenty baptisms that week.”

Deans said that just shopping for the Bucket project was a blessing. “We collected $1600 and we would go into stores to make purchases and we would get all they had of an item,” she said. “So, we would move on to another store and make purchases. Then, we would go out to the car and look over the supplies and our money and decide we could do one or two more buckets.”

“I thought we would be doing great,” she said, “if we packed seven or eight buckets. But, we were able to pack 16. I could definitely see God’s hand in it.”