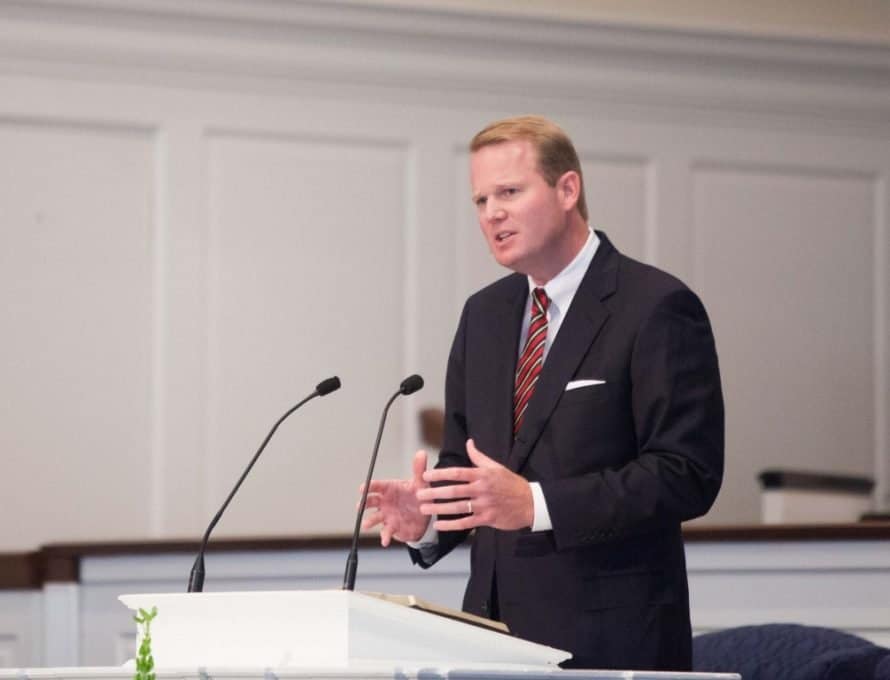 The chapel service marked the first time Allen returned to Southern since his election as the president of Midwestern, and he also celebrated a milestone in his faith journey. Twenty years ago, on Aug. 28, President R. Albert Mohler Jr. preached at a church in Mobile, Alabama, and during the service a young, teenaged Allen was baptized after his profession of faith in his Lord Jesus Christ.

Prior to being the president of Midwestern, Allen served as executive assistant to the president at Southern Seminary, the vice president for institutional advancement, he earned his Ph.D. and M.Div., and he received the Clyde T. Francisco Preaching Award.

Teaching on verse 7, Allen said believers must fight the good fight, finish the course, and keep the faith, and then receive the crown of life of 2 Timothy 4:8.

“We long for that day to realize with Paul [the promise] of verse 8, but there is no verse 8 expectation without a verse 7 lifetime,” Allen said.

He told a story about two young boys in Kansas City, Missouri, who received a letter to join their school’s track team. Romanticizing what practice would look like, these two boys arrived to their 6 a.m. practice early and began to run around the track as fast as they could. Once the reality set in about what practice with the track team entailed, these two boys began to think maybe track wasn’t for them. In a similar way, Christians should always keep the end in mind.

Those two young boys are Allen’s sons and he said that they serve as a reminder that this life’s race is not a sprint but a marathon.

“Halfway doctrine never works,” Allen said. “Own your convictions and enjoy them because the folly is, when you tackle the salt of the progressive, or whatever you do to water it down, you still won’t be thought nice enough by those who hate your doctrine and you won’t biblical enough to be accepted by those who hold it.

“Keep the faith. Guard your life and your doctrine because as you do, you will save yourself and those who hear you.”

Allen closed with a reflection on the great British Baptist preacher Charles Haddon Spurgeon emphasizing that throughout Baptist history he is the best representation of 2 Timothy 4:7. Midwestern acquired the personal library of Spurgeon in 2006, which contains approximately 6,000 books. This year, the school opened a new facility to house the library.

Audio and video of Allen’s address are available online at sbts.edu/resources.