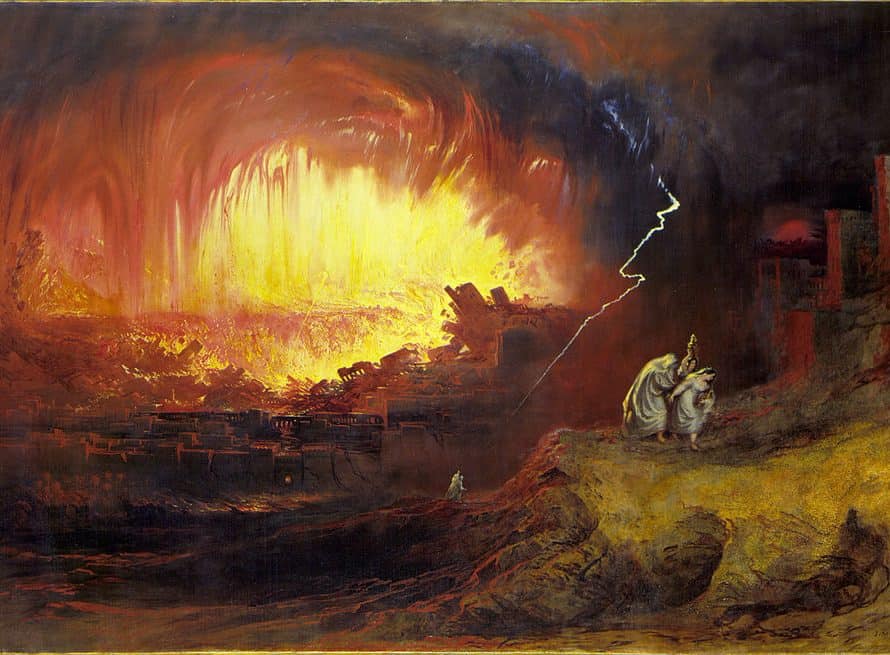 The Destruction Of Sodom And Gomorrah by John Martin

This is the fourth in a series of columns about same-sex attraction, adapted from the new MBC resource, “What Every Christian Should Know About Same-Sex Attraction,” available in print at mobaptist.org/apologetics and on Kindle at Amazon.com.

Six passages of Scripture speak directly to the issue of same-sex conduct. This column offers a brief survey of Gen. 19:5: “They [the men of Sodom] called out to Lot and said, ‘Where are the men who came to you tonight? Send them out to us so we can have sex with them!’” (HCSB)

God destroys Sodom and Gomorrah because of the people’s wickedness, expressed most egregiously in their homosexual behavior. Jews and Christians traditionally have understood the story of Sodom and Gomorrah to speak directly to the issue of homosexuality – revisionist explanations of this passage notwithstanding.

Gen. 13:13 tells us, “Now the men of Sodom were evil, sinning greatly against the Lord.” When the Lord, accompanied by two angels, visits Lot, He says, “The outcry against Sodom and Gomorrah is immense, and their sin is extremely serious” (Gen. 18:20).

Their sin clearly is homosexual behavior, for they surround Lot’s house and demand that his three guests be given to them so they may “have sex with them” (Gen. 19:5). Lot implores the men, “Don’t do this evil, my brothers” (v. 7). He takes the extraordinary step of offering his two virgin daughters to them if they only abandon their intent for the three guests under his roof.

Other references to these two cities cast them in the light of grievous, unrepentant sin. Jude 7, for example, refers to their behavior as “sexual immorality” and “perversions,” and 2 Peter 2:7 describes “the unrestrained behavior of the immoral.”

The “whole population” is engaged in this immoral practice (Gen. 19:4). For this sin, the Lord destroys the cities in an act of divine judgment.

The most common objection is that the sin of Sodom is primarily inhospitality, not same-sex behavior. Proponents of this view often cite Ezek. 16:48-49 to say that the sin of the Sodomites is their refusal to take in needy travelers.

No doubt the men of Sodom are an inhospitable bunch, but reading the next verse changes the perspective: “They were haughty and did detestable things before Me, so I removed them when I saw this” (v. 50). The word “detestable” – or “abomination” in other translations – brings us back to Leviticus, specifically Lev. 18:22 and Lev. 20:13, where homosexual conduct is in view.

Another challenge is that the use of yada – a Hebrew word translated “know” in the KJV and ESV – does not refer to homosexual conduct. It’s true that yada appears numerous times in the Bible and normally refers to knowing factual information, but at times yada plainly means to know someone intimately in a sexual fashion.

In Gen. 4:1 Adam “knew Eve his wife; and she conceived …” (KJV). Further, a look at Judges 19:22-25 offers a close parallel to the story of Lot in Sodom. Certain “perverted men of the city” surround the home where two guests have been taken in, demanding, “Bring out the man who came to your house so we can have sex (yada) with him!” (v. 22).

The homeowner describes their intent as “evil” and “horrible” (v. 23), and he offers his virgin daughter and the guest’s concubine in exchange. The men take the concubine, rape (yada) her and abuse her all night (v. 25).

The context determines the correct understanding of yada.

A third challenge is that Jesus mentions Sodom and Gomorrah but does not connect the cities with homosexuality. It’s true that in Matt. 10:14-15 Jesus does not specifically refer to any sin for which the residents of the cities are guilty.

However, as Christian authors James White and Jeffrey Niell explain, “Sodom’s judgment had become axiomatic for the fullest outpouring of God’s wrath throughout the Old Testament…. And the comparison is that it will be more tolerable for Sodom and Gomorrah in that day than for those cities that had experienced the visitation of the very apostles of the incarnate Lord, but refused their message of repentance and faith.”

A final challenge is that the story of Sodom and Gomorrah is not germane to the same-sex debate because it does not address loving, monogamous relationships. It only rails against homosexual gang rape and violence. Even if that were the case, it begs the question of what the Bible says, if anything, about loving, monogamous same-sex relationships.

The Bible speaks positively of loving, monogamous, lifelong relationships between a man and a woman, but never of two women or two men.

Next: Leviticus and the same-sex debate