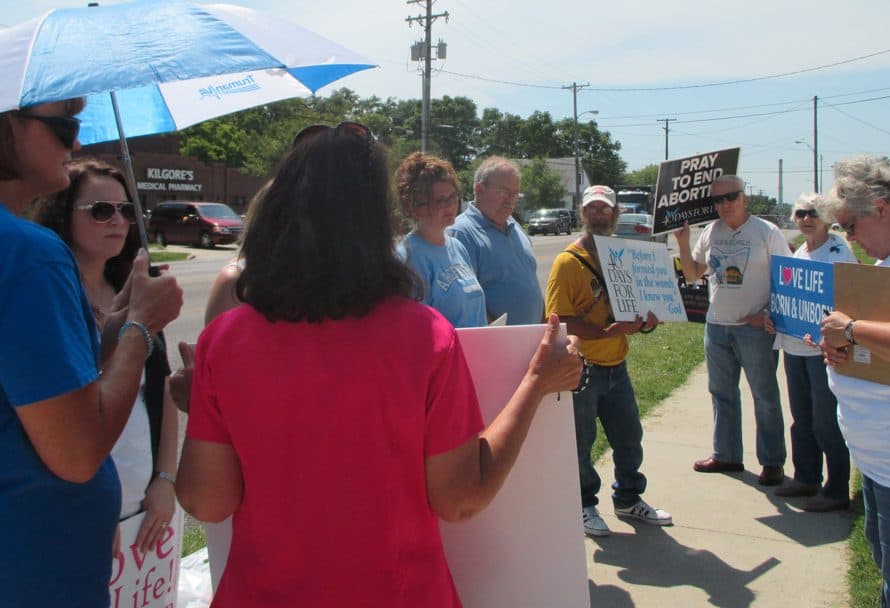 COLUMBIA – Demonstrators hold up signs in support of life outside the Columbia Planned Parenthood clinic. Pathway photo by Bonnie Lee.

Unless you have been on a long, disconnected vacation, you have either heard about or seen the videos recently released by the Center for Medical Progress concerning the grotesque, holocaustic activity of Planned Parenthood. To be blunt, ever since knowing about this series of horrific videos, my emotions have run the gamut from nausea to significant righteous indignation.

A friend of mine from another state, Gene Mills, wrote some poignant insights:

“Whatever comes of the revelations about Planned Parenthood and its participation in human trafficking of fetal ‘cadavers,’ these revelations will have accomplished one thing: they have, as Britt Hume opined, ‘parted the veil of antiseptic tidiness behind which the abortion industry has for so long operated.’

“Shame on the major networks ABC, NBC, and CBS for censoring the story. Thanks to this media blackout, it is estimated that 70% of the American people have heard little or nothing about the videos. At least CNN had the ‘shameless honesty’ to defend PP’s untenable position.

“The 5th video was released in the wake of Monday’s U.S. Senate vote to defund Planned Parenthood. The vote failed along near 100% clear party lines, 53—46, [As you would expect on this issue, Missouri Senators were on both sides with Sen. McCaskill voting against the majority of her constituents and Sen. Blunt representing the vast majority of Missourians.]

“The sight of a senior Planned Parenthood (PP) ‘doctor’ discussing the market demand for fetal body parts is troubling. And then, there is President Obama. His response to the release of these videos should come as no surprise. It appears the U.S. Justice Department is planning to investigate the organization that had the actual ‘temerity’ to show America PP’s evil marketing plan. God have mercy!

“What is essentially laid bare in all this drama is the fundamental essence of abortion: it is the destruction of a human life and the radical advocacy of abortion profiteers. The pro-life generation has echoed for 40 years that each abortion stops a beating heart and ends a precious life.

“Planned Parenthood has always attempted to sanitize the evidence, saying these ‘specimens’ are ‘by-products of conception’ which are ‘donated for cost consideration – but only for medical research purposes.’ That President Obama’s Administration, Planned Parenthood, or anyone would defend feticide for profit shows the extent to which we have removed the indispensable supports mentioned in President George Washington’s farewell warning—

Of all the dispositions and habits which lead to political prosperity, Religion and Morality are indispensable supports (…) The mere Politician, equally with the pious man, ought to respect and to cherish them (…) reason and experience both forbid us to expect that national morality can prevail in exclusion of religious principle.

“Perhaps America’s most common medical procedure, abortion, has hardened all of us. Fifty-five-million children are ‘MISSING’ today courtesy of an unelected, unaccountable 1973 U.S. Supreme Court, a Court that departed from Natural Law, precedent, and even factually accurate information in creating an unconditional right to terminate a beating heart throughout all nine months of pregnancy in all 50 states for any reason or no reason at all.

“To those who insist on defending this abhorrent practice, please be advised that no good can come from calling evil good and good evil! It actually will prove to be the wrong side of history.”

My thanks to my friend who articulated something I simply couldn’t stomach to address. As citizens of this nation, we have a duty to be engaged in the process, not to condemn others, but to protect the lives of the innocent. The Lord God will not hold our nation’s citizens guiltless for this atrocity.

I just received a report from the Dakotas. It was the 75th anniversary celebration of the big motorcycle rally in the small town of Sturgis, N.D. More than 1 million riders were expected. Southern Baptists were there, too. The state executive director gave me a report that more than 6,195 gospel presentations were recorded and 607 people prayed to receive Christ. Pray for the those new saints and for those who are responsible to disciple them in their new walk of faith.