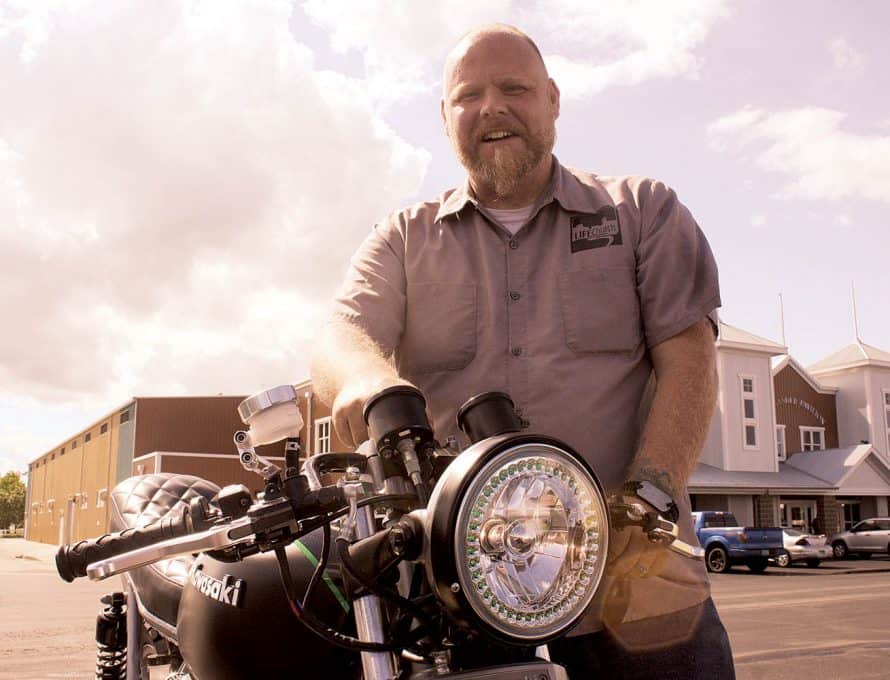 FARGO, N.D. – Tim Brown, a church planter and pastor of LIFE Church here, shows off the custom Kawasaki café racer he and church members built at the “Show and Shine” event co-hosted by the Missouri Baptist Biker Fellowship. Pathway photo by Brian Koonce

FARGO , N.D. – When attempting to start a new work in a totally new locale far from home and with little gospel presence, a church planter has to earn the people’s trust. For Tim Brown and his wife, Michelle, trying to plant a church in Fargo, that meant surviving a winter.

The Browns left their home in Memphis, Tenn., in August of 2012 after seeking the Lord’s will for the next stage in their ministry. They were contacted by the Dakota Baptist Association to consider planting a church along the I-29 corridor, and they soon fell in love with Fargo and its people.

“It felt like we had been here for a hundred years,” Brown said. “It just seemed like we fit in. We liked pretty much everything about the culture. One of the things about being a missionary is that you have got to be able to love the culture to serve effectively, so were a good fit. We felt like we could live our life here.”

That is why they named their church plant LIFE Church when they officially launched in September of 2013. The Browns wanted their family – and the gospel – to be in Fargo not just for a season, but for life.

“It’s been a very interesting experience in blessing, futility and every emotion you can imagine,” he said. “Right now we are in the stage where we are starting to pick up momentum. We value organic discipleship and we’re starting to see that natural growth, even though it’s not as instant as it might be in the South.”

Brown said they have slowly been earning credibility to share the gospel and be seen as a vital part of the community. Fargo is a city of 210,000, one of the bigger stops along I-29 and easily the biggest city in North Dakota – nearly double the size of the second largest, Bismarck. More than 40 percent of the population claim zero religious affiliation, while just under a third are mainline protestant. Another 17 percent are Catholic, but less than 10 percent are evangelical.

“We’ve survived three winters, so people are starting to give us the OK to start talking to them,” he said.

Though LIFE Church is not specifically a biker church, Brown does ride a motorcycle and they partnered with the Missouri Baptist Biker Fellowship for a June 22 “Show and Shine” evangelistic motorcycle and car show. Brown and a LIFEChurch member also completed a complete frame-off restoration of a 1982  Kawasaki motorcycle, which they customized to be a café racer (the predecessor to the modern street biker, it is a very fast, very light, very compact bike) as a promotional giveaway for the event.