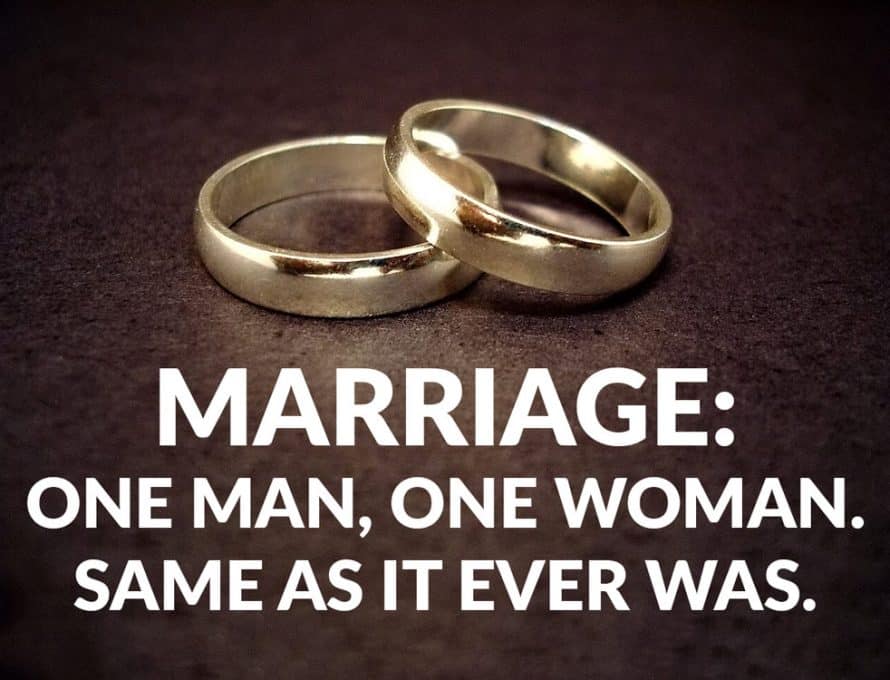 Across town, the annual Gay Pride parade was setting attendance records. The usual assortment of flamboyant costumes swirled around revelers celebrating the previous day’s victory over an ancient institution they’d found confining. One straight couple said they brought their toddlers, Fox and Bear (no kidding), so they could understand both freedom and homosexuality.

About five miles down the road, in the little church my mother attends, the Ledbetter clan was gathered with other great houses to wed two of our children – a man and a woman. The preacher was a family friend, and he reminded us all of God’s first institution, the temporal picture of the timeless relationship between Christ and His church. He preached the gospel to the marrying couple and to the witnesses. “God hears our commitments,” he told us, and he takes them seriously. We nodded in solemn joy at the occasion and the familiar words. The short ceremony proceeded in the pattern familiar to us all, and we smiled as the exuberant newlyweds promenaded down the church aisle.

After greeting them in the foyer, we walked into a small fellowship hall for cake, mixed nuts, chalky white wedding mints and punch made from ginger ale and lime sherbet – staples of Baptist weddings for a generation. But the food wasn’t the point as we gathered by family groups to catch up and tease and grin indulgently as a new generation strutted and crowed. We saw the newlyweds off with a barrage of bubbles and spent a half hour preparing the fellowship hall for the next day’s church activities.

Later that day, my side of the family convened at Mom and Dad’s for an annual cookout. The cool evening and blessed lack of mosquitoes led us to linger until dark as we talked about our own marriages, 61 years old, 39 years old, 30 years old, two years old and 10 months old. The youngsters can’t imagine my parents’ marriage of over six decades or even mine of nearly four. But they also can’t imagine Dad without Mom or Pop without Granny. Our laughter and wild exaggerated stories taught the newer couples, and the single kids, something as timeless as the lessons Ledbetters and Shults and Reeds and Tunes taught their kids a century back – one man, one woman for life, same as it ever was.

No one mentioned that day, June 27, the ruling by Justice Kennedy’s court the day before. Maybe I was the only one thinking of it in the background of more important things we said and heard and did that day. But my heart was full for those hours of comfort and peace, in stark contrast of the previous day’s flurry of reading legal opinions, poring over Twitter for comments, bluster and trash talk. I was stirred up Friday, as were many of you, and my mind seethed with strong emotions in response to cultural madness, a lot of questions not answerable by the wisdom of this age. But I spent the next morning fishing, that afternoon with family in the broadest sense and that evening with those I’ve known since birth, theirs or mine.

I got my answer that day. There is no ultimate joy or satisfaction in man’s rebellion against God or His institutions – my rebellion or others’. But there is power in young people hearing the counsel and the testimonies of those who’ve gone before. There is significance in wrinkled and scarred relationships that say convincingly that love and commitment outlast the new-car smell of honeymoons and shower gifts. They have seen that doing the right things, generally, produces something worth passing along to kids they will add to the circle a July or two down the road.

As citizens we will stay engaged as long as we have rights to do so. As citizens we can facilitate the rescue of some victims of our libertine society. As churches, we boldly teach the whole counsel of God to our neighbors, who will often hate to hear it. As children of God – fathers and mothers, husbands and wives, sons and daughters – we will teach our kin what’s right and what is worthy. There are things to mourn in the rebellion of nations against God’s clear revelation of Himself. But we mourn for the lost and confused – the worshippers of creation rather than the Creator. We are not victims of wayward American law. The serenity of that Christian wedding service, and of that summer family gathering, is an answer from the unchanging and unshakable God. His children are not victims at all.