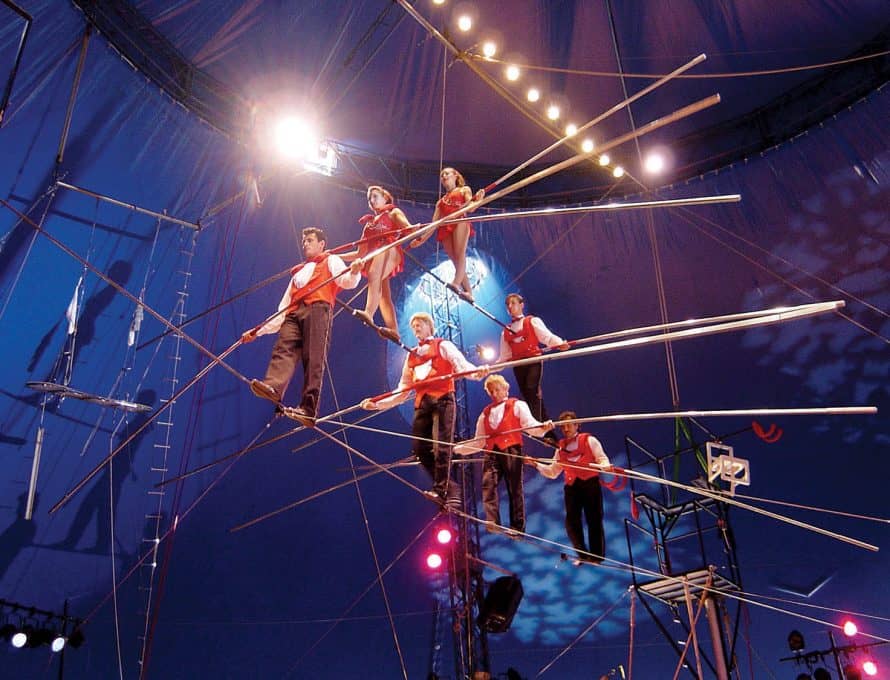 FERGUSON – The Flying Wallendas amaze the crowd with their seven-person, highwire pyramid. Tino Wallenda recently challenged the men of First Baptist Church here to step out in faith and stand for Christ on a daily basis. Pathway photo.

FERGUSON – Eight generations of Tino Wallenda’s family have been in the same unusual business.

The family is known as the Flying Wallendas for the dangerous tightrope act performed by the group.

“Applause motivated my family in all of these performances,” he said.

Now Wallenda is motivated by a higher calling.

“I became a believer more than 40 years ago,” he said, “and what I do attracts attention. What I do gives me the opportunity to share.”

But Wallenda confessed that speaking to groups was an area for growth.

“When I was in my 20s, I became a believer, but it was several years later that Jesus Christ became the Lord of my life. When it became the real thing I began to change.”

With that change came offers to share his faith with large groups and broadcasts.

“I was more fearful of those speaking engagements,” he said, “than walking the tightrope. I was trained to walk on the tightrope. So speaking stretched me, and I didn’t like it.”

Wallenda described how God trained him with incremental steps to share—first, with two-minute testimonies and, then, going into a service and the pastor turning over the entire service to him. Today, Wallenda and his family use their performances to witness for Jesus.

“We’ve toured with Circus Maranatha to share our testimonies,” Wallenda said. “We are able to perform at schools and churches to attract attention and share. I also visit prisons with Bill Glass and his Behind the Walls Ministry. I’m considered a person of interest. I perform and stop on the wire over the yard to share my experience. Then I tell the prisoners that my teammates on the ground with them have the answer to how they can know the Lord.”

Wallenda challenged the men at FBC Ferguson to share Jesus.

“You are the hand of God,” he said, “to bring men to a saving knowledge of God. If you’re willing to go out and extend the gospel and live for Him, you’ll see many different people come to know Jesus.”

Wallenda encouraged them to shine and lead many to righteousness.

“It is time to stand and shine,” he said. “We’ve backed out of media, sports, politics and the schools. They are now void of Christian influence. It is time to move into all of those areas.”

“You need to live for God,” he said, “and allow Jesus to work through you.”