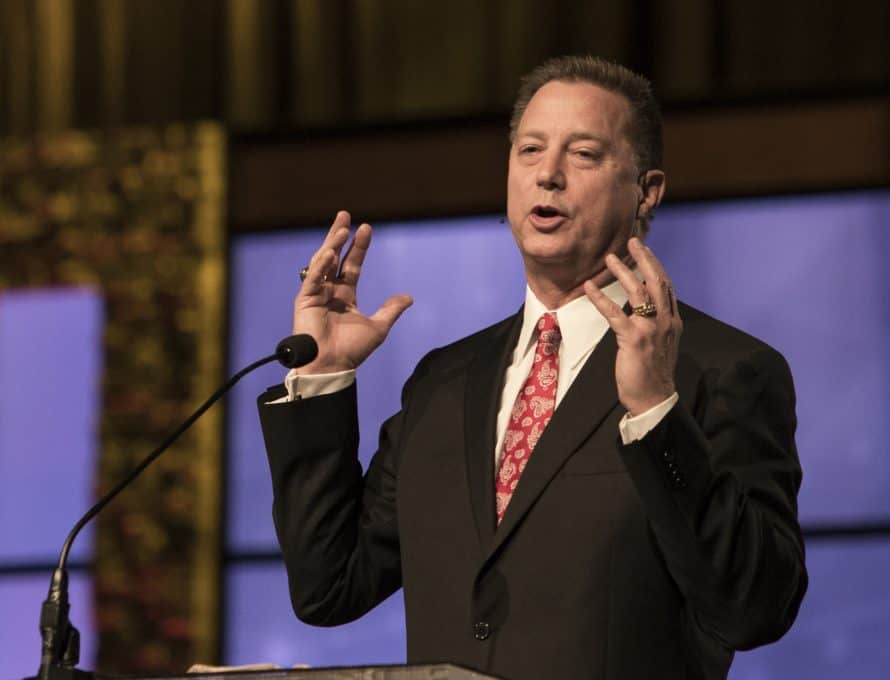 COLUMBUS, Ohio (BP) – God can send the flames of spiritual awakening that the church and nation so desperately need, Eddie Bumpers told messengers during his convention sermon June 17 at the SBC annual meeting in Columbus, Ohio.

“It is possible for God to send revival to bring us to a place of new obedience to God, a new commitment to the Great Commission and the Great Command of the Lord Jesus,” said Bumpers, pastor of Crossway Baptist Church in Springfield, Mo.

Bumpers said the story of Elijah, King Ahab and the prophets of Baal in 1 Kings 18 depicts the conditions in which God chooses to send the fire of His Spirit upon His people.

“Step one to the fire of God falling is that we must aggressively deal with our sin,” Bumpers said.

“There will never be revival in my life, your life, my church, your church or this nation until we put our finger on the problem and say, ‘Sin is the problem,'” he said. “It is not economics. It is not education. It is not the environment. It is sin, my sin, your sin, that must be confronted and must be dealt with aggressively. … We must get honest with God and confess our sin before God.”

In 1 Kings 18, Bumpers explained, God sent the prophet Elijah to confront King Ahab, who had abandoned the worship of God for idolatry and had led God’s people to do the same. Ahab accused Elijah of bringing trouble to Israel, but without flinching Elijah declared the truth of the Israelite king’s sinful behavior and its detrimental effect on that nation.

Southern Baptists likewise must stand for the truth of God’s Word as they confront sin, Bumpers said.

Alongside challenging the culture, Southern Baptists must challenge God’s people if they desire to see the fire of God poured out in this nation, Bumpers said. After confronting Ahab, Elijah confronted the Israelites, who refused to follow God wholeheartedly, wavering between the worship of God and the false god Baal.

“You cannot walk with God with one foot on the path of obedience and another foot in the ditch of pluralism,” Bumpers said. “God wants all of me and all of you, and He wants us to believe His Word totally.”

Elijah, after rebuking God’s people for their unfaithfulness, then challenged the prophets of Baal to set up an altar and call on Baal to send fire from heaven that would consume the sacrifice on the altar. They accepted his challenge, but Baal never responded to their prayers. Then Elijah built an altar, drenched it in water several times and prayed that God would magnify Himself and show His people that He alone was God.

Even so, Southern Baptists must earnestly pray for God to send the fire of spiritual awakening, Bumpers said.