JEFFERSON CITY — In 2016, Missouri Baptists will launch an initiative, called The Macedonia Project, with a vision for making disciples among the 2.3 million lost people in five counties near St. Louis and Kansas City.

The lost population in these five counties—St. Louis County/City, St. Charles, Jefferson, Clay and Jackson – make up more than half of the 4.5 million Missourians who, according to a 2010 U.S. Religion Census, don’t claim to be born again. 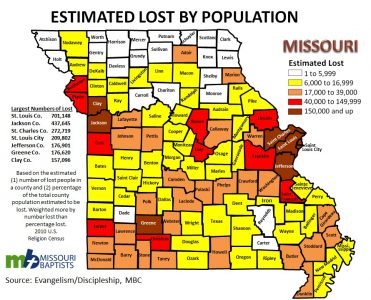 JEFFERSON CITY – This map depicts the estimated lostness in each of Missouri’s counties. Among the most unreached counties in the state are five that will be targeted through the Missouri Baptist Convention’s Macedonia Project: St. Louis County/City, Jackson, St. Charles, Jefferson and Clay. Click map to see high-resolution version.

Moreover, these five counties have non-evangelical populations above 75 percent, according to a report released by the North American Mission Board (NAMB) in 2013. As such, relatively few residents in these counties are seeking to bring the lost to Christ.

For this reason, the Macedonia Project – an initiative organized by the Missouri Baptist Convention’s (MBC) evangelism/discipleship team – seeks to build partnerships among a total of 375 Missouri Baptist churches to reach the state’s most unreached areas.

“Timothy Dearborn is a missions writer that has said, ‘It is not the church of God that has a mission in the world, but the God of mission who has a church in the world,’” Mark Snowden, MBC evangelism/discipleship strategist, said. “God has our MBC churches in place for such a time as this. If Missouri Baptists really believe that God invites them to be on mission, will they accept that challenge? The Macedonia Project is a statewide way to address the most concentrated lostness in Missouri. It is my prayer that every MBC church will begin planning now to come over and help churches in our largest cities particularly focusing on 2016 and beyond.”

According to Snowden, churches can take part in the Macedonia project in three ways:

Currently, Snowden is working with several Missouri Baptist churches to pilot and fine-tune the Macedonia Project before its 2016 launch. He asked Missouri Baptists to begin praying for the project, both for the churches that will be involved and for those who will hear the gospel as a result of their witness.

In order to learn more about how your church can become involved in the Macedonia Project, email Snowden at MSnowden@mobaptist.org.