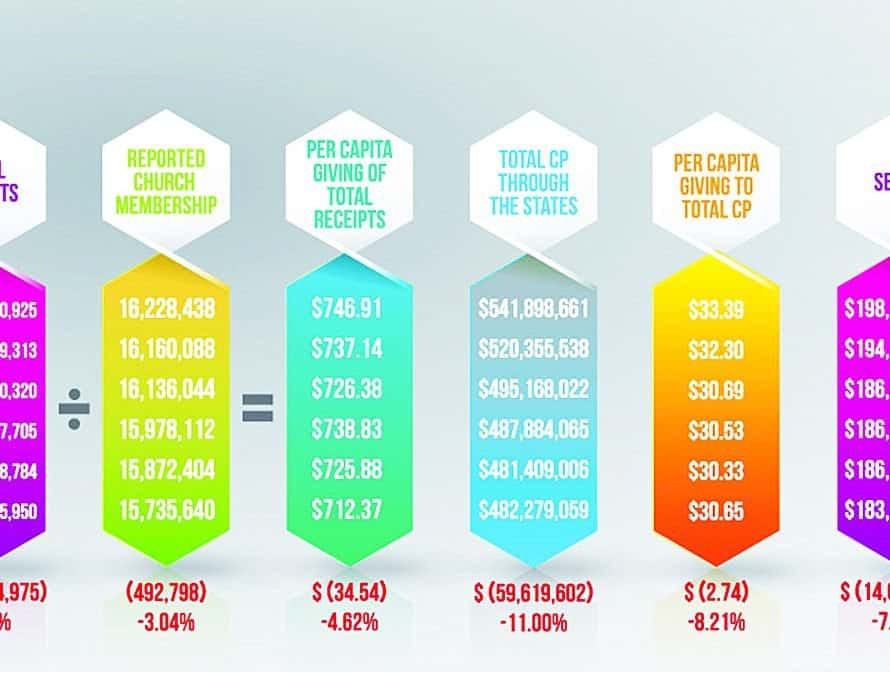 Click here to see high-res version of this graphic.

NASHVILLE (BP) – Despite a five-year decline in church membership and a corresponding decrease in per capita giving, the national portion of the Cooperative Program shows signs of rebounding through the first five months of fiscal 2014–2015.

Year-to-date contributions to the Southern Baptist Convention Cooperative Program Allocation Budget through Jan. 31 totaled $64,702,035.77, the highest amount since the Jan. 31, 2012, report. Though lower than the $67.8 million received through January 2010, the $65.6 million in 2011, and the $65.1 million in 2012, this marks the first increase through the first four months of the fiscal year since 2012 and may be a harbinger that local churches are recovering from the lingering effects of the Great Recession.

The two SBC seasonal missions offerings – Lottie Moon Christmas Offering for International Missions (LMCO) and Annie Armstrong Easter Offering for North American Missions (AAEO) – have also shown positive signs of rebound. After plummeting from $150 million in 2007 to $141 million in 2008, offerings to the LMCO slowly edged upward through 2012 before reaching and surpassing 2007’s previous high in 2013, topping $154 million for a new record, though still short of the $175 million goal.

Similarly, gifts to the AAEO declined from its record $59 million in 2007 before beginning to recover in 2011 and reaching $58 million in 2014, the third highest amount in history.

While monthly CP Allocation Budget reports often show significant swings based on the number of Sundays in a given month, the day of the month churches forward their CP contributions to their state conventions, and the timing of when state conventions forward the national portion of their CP contributions to the Executive Committee, this increase through five months, coupled with strengthening support for LMCO and AAEO, show signs that the long-term impact of the global economic crisis may be past.

This positive report stands against the stark reality that giving to Southern Baptist churches for all causes – general budget gifts, missions offerings, missions trips, and other church ministry needs –declined by more than $911 million from 2008 to 2013, a decline of 7.52 percent, according to the Annual Church Profile submitted by cooperating Southern Baptist churches.

Per capita giving also declined over the same period, from $746.91 per member in 2008 to $712.37 in 2013. The combination of declining membership and declining per capita giving impacted the ability of local churches to do ministry in their communities and beyond and has been felt by both state Baptist conventions and the SBC (see accompanying chart).

For example, even though churches increased the percentage of their undesignated receipts forwarded through the Cooperative Program from 5.407 percent in 2011 to 5.414 percent in 2012 and to 5.50 percent in 2013, the actual dollar amount of CP continued to decline, hovering at a 14-year low the past two years.

The Cooperative Program was established in 1925 as a collaborative effort between the SBC and state Baptist conventions to assist churches. Prior to that time, ministry leaders from scores of state and national ministries routinely asked churches for time in their worship services to promote their ministries and to receive designated offerings from the church members.

Recognizing the drain these requests made on the churches, pastors and convention leaders hammered out a plan that sought to address the problem of so many special offerings. The plan was remarkably simple:

1. individuals give their tithes and offerings to their local churches;

2. the churches would forward a percentage of their contributions to their state Baptist convention for ministry in the state;

3. the state convention would then forward a percentage of its funds to provide support for SBC missions and ministries.

Through a unified, cooperative program of giving, both sets of ministries could be funded – state ministry needs and ministry endeavors of the SBC. In 1925, this cooperative venture between churches, state conventions, and the SBC was named the Cooperative Program.

When the Cooperative Program was formed, a 50/50 division between the state conventions and the SBC (after shared ministry costs associated with promoting CP were deducted) was lifted up as an ideal goal. This target has been reemphasized at SBC annual meetings several times over the years, most recently in 2010 with the adoption of the Great Commission Task Force report.

The actual division, however, has never reached that suggested ideal.

During the CP’s first five years, the division languished at the 80/20 rate (or lower) – 80 percent remaining in the state, 20 percent forwarded to SBC causes. The division finally surpassed 70/30 in the opening years of the 1930s before falling back to a more or less steady 74/26 rate during the remainder of the Great Depression.

During the World War II years and, indeed, for the majority of the CP’s ninety-year history, the division forwarded by the states to the SBC fluctuated between 33 percent and 37 percent per year, with three notable exceptions.

During the post-World War II growth spurt in Southern Baptist church attendance and baptisms (1946–1952), the division of CP funds forwarded by the state conventions to SBC causes exceeded 38 percent for the first time, reaching an all-time high of 40.5 percent in 1951.

During the first decade of the SBC’s Bold Mission Thrust initiative, which corresponded with the height of the SBC C