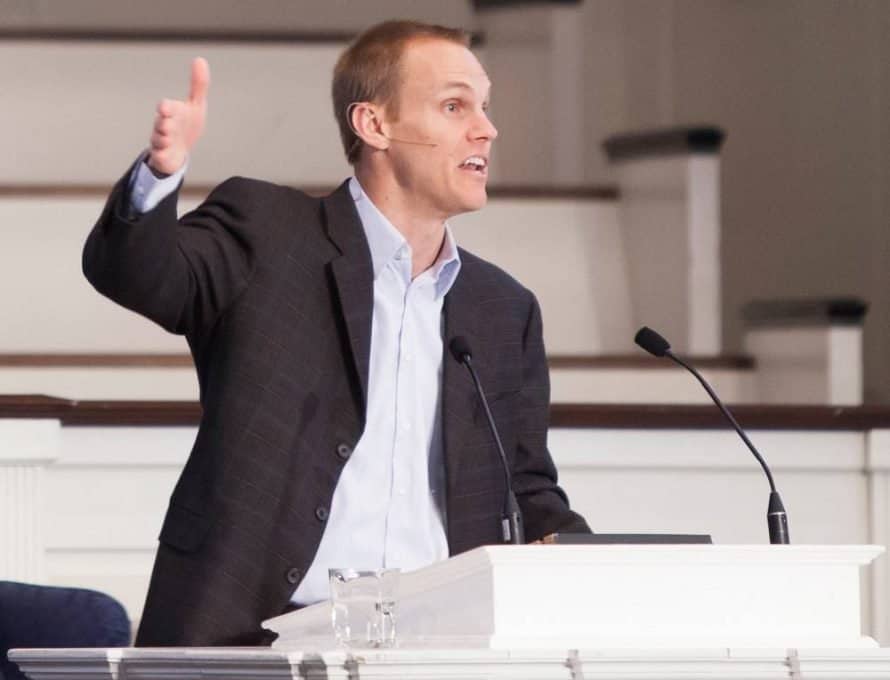 HOUSTON – International Mission Board President David Platt proposed streamlining the mission agency’s strategy and structure – in keeping with his desire for IMB to exalt Christ and work more effectively toward accomplishing the Great Commission – during IMB’s Feb. 24-25 trustee meeting in Houston.

“We want to empower limitless missionary teams to make disciples and multiply churches among unreached people,” Platt said. “We need a strategy that doesn’t cap our number of missionaries merely based upon how much money we have.”

Platt noted the IMB operated “in the red” last year, with the agency’s operating expenses exceeding income by nearly $21 million.

“Right now our funnel is really small … such that we’re turning people away,” Platt said. “And what I’m saying, what we know, is that we need to blow open this funnel and create as many pathways as possible for Christians and churches to get the Gospel to unreached people.”

IMB must creatively consider how to leverage the avenues God has given for limitless men, women and families to join together on missionary teams to make disciples and multiply churches among unreached people groups, Platt said. Since his election in August 2014, Platt has stated his five biblically based desires for IMB are to exalt Christ, mobilize Christians, equip the church, facilitate church planting and play its part in completing the Great Commission.

As a result of these desires, Platt recommended to IMB trustees a “reset” of the agency’s strategy, and realignment of its structure, to focus on five main areas:

• Global Training, led by Zane Pratt, who was named vice president of global training during the November 2014 trustee meeting.

• Operations and Finance, which consolidates the current offices of personnel, logistics and finance into one team. Trustees affirmed the search for a person to lead the newly formed operations and finance work. Randy Pegues, vice president of global logistics support; Tom Williams, vice president of global personnel; and David Steverson, vice president of finance; will step out of their current positions and into other assignments to be determined in the days ahead. “In the meantime, they will continue to function in their current roles,” Platt said, and Steverson will continue his chief financial officer responsibility.

• Mobilization, which “re-envisions” the current Church and Partner Services team to more effectively mobilize Christians and churches for global mission, to be led by a to-be-named vice president of mobilization. Ken Winter, vice president of church and partner services, plans to return to work in a local church.

• Strategy, which overarches all the areas with a “relentless” focus to unify IMB culture. As a result, the current Office of Global Strategic Mobilization, currently led by Scott Holste, will fold into the new strategy in various ways. Some areas will move under Global Engagement; other areas will report directly to Platt and Sebastian Traeger, IMB executive vice president. Holste will work in one of these areas. The current Office of Prayer, led by Gordon Fort, will be “infused across this entire strategy,” Platt said. Fort, who has served as senior vice president of prayer mobilization and training, will work alongside Platt and Traeger to help fuel the overall strategy with a focus on relating to key IMB partners and constituents.

Platt said the changes are intended to be reproducible through the IMB’s national partners around the world: making disciples among unreached people and seeing churches established, then seeing those churches, in turn, send Christians to unreached people, training them and supporting them as they engage the world with the Gospel.

“We want to fuel movement like this all over the world!” Platt said. “But let me be clear. Strategy and structure are not the ultimate answer to seeing Christians and churches engaging unreached people with the Gospel…. What that means is that more than we need a streamlined strategy or a simplified structure, we need the power of God to do what only He can do.

“This is why I am calling everyone across our IMB family – from trustees to personnel or otherwise – to fast and pray, because only God can do this work…. Let’s get down on our knees, then get up from our knees and do whatever it takes, no matter what that means, to set the sails for God to empower limitless missionary teams who are making disciples and multiplying churches among unreached people for the glory of His name.”

• During the meeting, IMB trustees also appointed 25 new missionaries to serve around the world, joining a total missionary force of approximately 4,800. The missionaries were commissioned during an appointment service at Sagemont Baptist Church of Houston on Feb. 25.

• Steverson, IMB’s chief financial officer, presented a report on the reallocation of funds as approved by the finance committee. While personnel expenses were below budget in the past year, Steverson noted income also fell below budget. Property sales of $75 million have been used in recent years to overcome budget shortfalls.

•  The next IMB trustee meeting is May 12-13 in Louisville, Ky. The next missionary appointment service is May 13 at Highview Baptist Church in Louisville.