MOBERLY – The election is more than a year-and-a-half away, but a Missouri Baptist has already thrown his hat into the ring to be elected governor next November.

Randy Asbury, a member of First Baptist Church, Salisbury, made the announcement Feb. 12 at Moberly Area Community College. Asbury, a Republican, served in the Missouri House beginning in 2010 as the representative from the 22nd district, but lost his seat due to redistricting in 2012. He is a former deputy director for the Missouri Department of Agriculture, a former Randolph County commissioner and the current executive director for the Coalition to Protect the Missouri River. 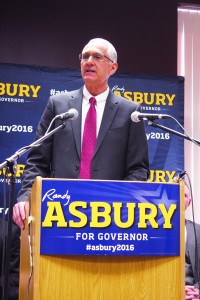 Asbury has been a member of First Baptist Church since 2010 and chaired the pulpit search committee in 2014. He accepted Christ in 1993.

Asbury told The Pathway that even in an age of political correctness, faith has a place in the political realm.

“Our country was built on Judeo-Christian precepts and principles,” Asbury said. “We’ve moved away from that, but it’s still a key part of who our nation is. I am unashamed of my faith. I love the Lord, and He has been such a blessing to me. I hope as I go out and campaign that people see that in me. I hope they see a piece of Jesus somehow some way and they can be touched by Him in a similar way.”

Asbury has appeared in the pages of The Pathway before. He and his son, Tristan, were on a seven-man 2013 team that travelled to the Philippines in the days after Typhoon Haiyan to help rebuild a tiny island’s school in cooperation with Baptist Global Response and the International Mission Board. There he was invited by the school’s principal to speak directly with 100 older students about his faith in Jesus.