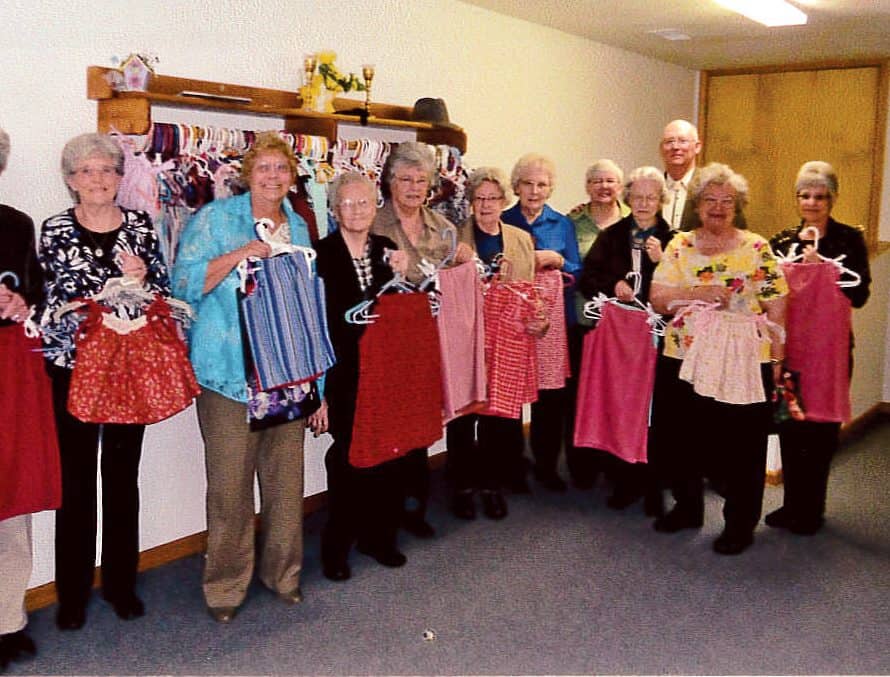 They may not be part of the biggest congregation in the Missouri Baptist Convention, but the WMU ladies of rural First Baptist Church, Browning, are making the love of Christ felt in a big way in a faraway land. The ladies, part of the approximately 40 worshippers who attend the church in Linn County in north-central Missouri, have made more than 600 “pillow case” dresses for orphans in Haiti. They work in partnership with Red Bridge Baptist Church in Kansas City, which distributes the dresses to the Home of the Hope Orphanage in Haiti.

I learned about the work of the ladies at First Browning after one of the men at the church, David Long, wrote me a note about them. “I look forward to seeing this in The Pathway because our ladies do not seek recognition, but deserve much.” I agree.

The ministry of the First Browning ladies reminds us of the brief account of the work of Dorcas in Acts 9:36-42. Dorcus was a Christian woman, likely a widow, who lived in Joppa. She was considered a leader in the small, Christian community and was beloved for the manner in which she used her position and means to do good works and acts of charity, particularly for widows and their half-orphaned children.

Among Dorcas’ charitable deeds was the clothing of the widows and their children with garments she herself made (v. 39). Like the ladies at First Browning, Dorcas’ work was entirely voluntary. She chose no work that had even a whiff of a worldly taint, but rather one that was in harmony with the gospel. Hers were good works, good in the sense of truly beneficial. They were works that grew from faith and were the very Word of God in deed and fulfillment. Dorcas did not tire. Discouragements were overcome, and she continued faithful service to the end.

Acts 9:37 tells us that Dorcas fell ill and died. Dorcas’ Christian friends sent two from among them to fetch Peter, who was nine miles away from Joppa in Lydda. When Peter arrived he found mourners surrounding Dorcas’ body, many of them wearing dresses made for them by Dorcas. Scripture tells us that Peter prayed and the Lord raised Dorcas from the dead. It is clear God had given much to the church in Joppa when He gave Dorcas to it. He intended to give the church still more in her. It is important to note that news of what had happened spread quickly throughout Joppa, and Acts 9:42 says, “many believed in the Lord.”

The ladies of First Browning, like Dorcas, are dressmakers. Instead of enriching themselves by sewing only for money, they are enriching their souls by sewing for love. The garments they make for the Haitian orphans are really made for the Lord.

Thanks brother Long for calling the work of the ladies at First Browning to our attention. It should remind us to give of ourselves even more to those in need. If we will, God just may choose to do a miracle in someone’s life because we shared His love with someone and demonstrated Dorcas-like faith by word and deed.