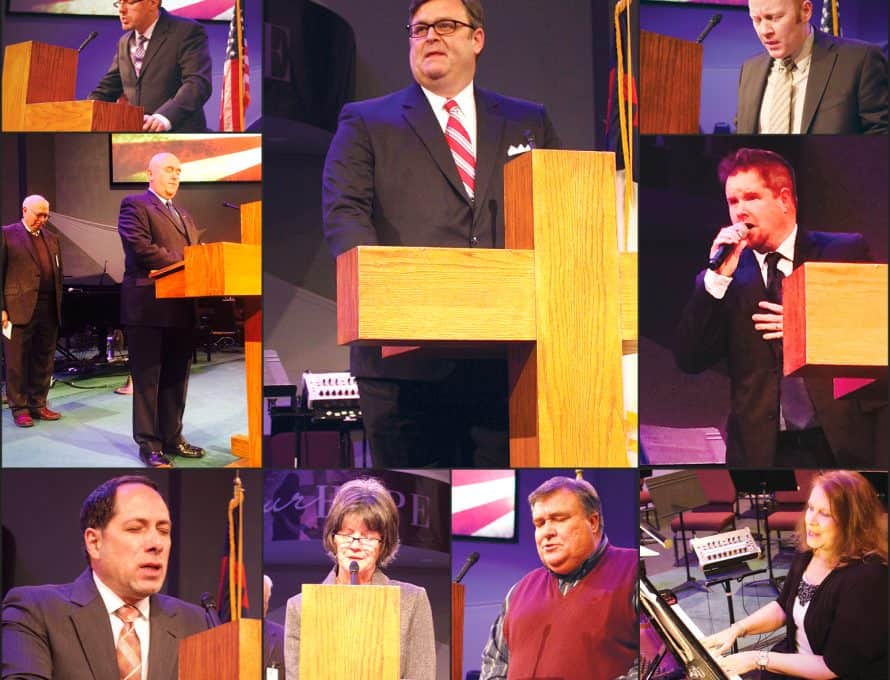 JEFFERSON CITY – Hope remains for Missouri and for the United States even in perilous times, Hannibal-LaGrange University President Anthony Allen told civic and church leaders from around the state during the 10th annual Legislative Prayer Breakfast and Service, Jan. 7.

More than 200 people gathered at Concord Baptist Church here for the event, which is sponsored by the Christian Life Commission (CLC) of the Missouri Baptist Convention (MBC).

Following a prayer breakfast, guests gathered in the church’s worship center, where Pastor Monte Shinkle opened the service in prayer before volunteers from the American Legion Post 5 led the presentation of colors and the pledge of allegiance. Then, after Pathway Editor and MBC Public Policy Director Don Hinkle read from Romans 13, HLGU’s Allen gave his charge to the members of Missouri’s 98th General Assembly.

“Today, I want to remind you, as you well know, that we’re living in a precarious time,” Allen said. “For decades, we have seen the erosion of our culture, a disintegration of morals, a disregard for the constitution and the laws of our land. Chilling news reports remind us that everyday violence is perpetrated, like the two New York officers last year that were killed, gunned down in their police car.

“What is equally concerning to me is the lack of contrition on the part of our nation and those who don’t seem to think anything is wrong with such atrocities. We’re on the precipice overlooking moral collapse. And recent events even in our state remind us of the tranquility and peace that is so fragile.

“These problems, I would submit to you this morning, are but symptoms of the deeper problems. They are issues of the heart.”

Allen, after challenging his audience with a word from the book of Jeremiah, asked if there is any answer for the precarious times in which Missourians now live.

Following Allen’s address, Missouri Baptist leaders from around the state prayed for each branch of the Missouri government. Spencer Plumlee, pastor of Riverview Baptist Church in Osage Beach, opened the time of prayer by lifting requests to God on behalf of Governor Jay Nixon and the executive branch of the state government.

“I think it is important at the beginning of this time of prayer to remember that this is not a perfunctory exercise,” Plumlee said before praying. “We believe in the power of prayer. It is our conviction that one of the divinely ordained means that God the creator acts is through prayer.”

Plumlee then prayed for the executive branch: “I pray for their families. … Shield them from some of the many challenges that come along with spouses and parents in positions in leadership he said. God, I pray for protection … for wisdom … for divine guidance. … Finally I pray for peace. I pray that you grant them a peace that doesn’t come from a confidence in themselves, but that comes from a confidence in You.”

Bev Ehlen, state director for Concerned Women of America, prayed for the Missouri Senate, asking God to give “discernment, understanding and knowledge” to each Senator, for the sake of continued “civility” in the state. She prayed also that God would pour His love upon each member of the Senate and that He would provide for them “spiritually, physically, emotionally and financially as they serve as a family.”

Gary Schultz, pastor of First Baptist Church, Fulton, prayed for the Missouri House of Representatives: “Our Father, maker of heaven and earth, maker of each one of us, we thank you that you use us to bring about Your good, to bring about Your righteous purposes here on this earth, that You have given us government to help us accomplish Your purposes, as Your minister for good to encourage right living and to protect us from evil,” he said, praying also that God would “grant wisdom, discernment and righteousness” to each Representative, so that they will make decisions that “help the people of our great state bring honor and glory to You.

Frank Whitney, pastor of Union Hill Baptist Church, Holts Summit, prayed for the Missouri Supreme Court and the state judicial system. He asked God to burden Christians in Missouri to pray for their leaders: “May they cry out to You (on behalf of Supreme Court Justices) for wisdom, for courage, for morality, for ethics and, God, for the tenacity to keep going. … May we make the promise this morning that, for the remainder of this year, we will lift up these Supreme Court Justices and their families every day.”

John Battaglia, the Missouri state director for Capitol Commission, closed the prayer service with a benediction: “Lord, all that we have done today, You have heard. You have begun already to move forward Your agenda. We pray God that the kingdom will be advanced in the 98th assembly. We pray that you would push back every force of evil, all darkness. Push back every voice that deters people from You and from honoring You.” He also prayed that Christians around state will be burdened “to pray for our state leaders, to love them, to care for them, to be present, to stand and affirm them.”