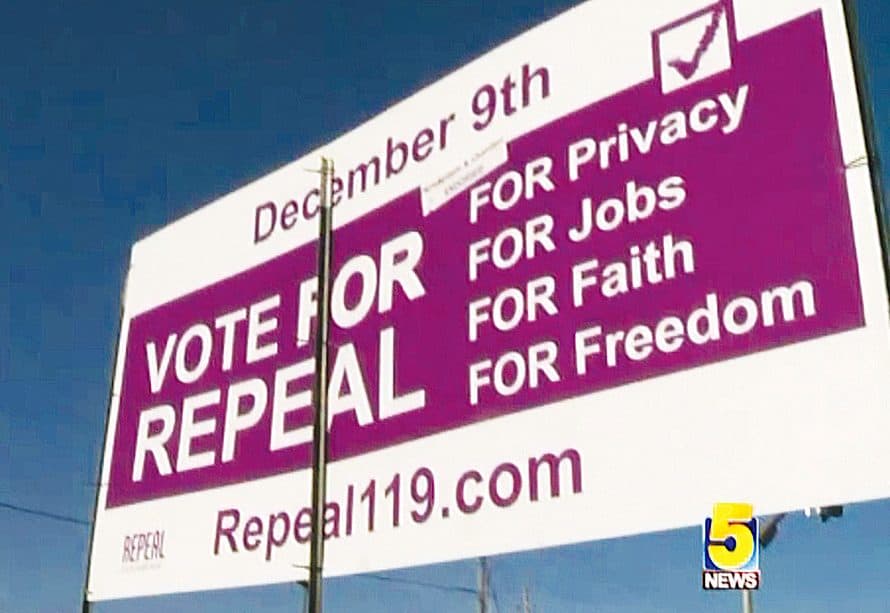 FAYETTEVILLE, Ark. (BP) – Voters in a northwest Arkansas city have overturned a pro-homosexual/transgender ordinance that many claimed posed a threat to religious liberty.

In a special election Tuesday (Dec. 9), residents of Fayetteville – home of the University of Arkansas – approved repeal of the measure by fewer than 500 votes, with 52 percent (7,523) of voters in favor of repeal and 48 percent (7,040) opposed. The result rescinded a law passed by the city council in a 6-2 vote in August. Opponents of the ordinance collected enough signatures within a month to place its repeal on a special election ballot.

Local and national Southern Baptist leaders opposed the ordinance largely because of concerns it would infringe upon the freedoms of religion and conscience for individuals, churches and businesses.

“The city of Fayetteville had previously passed one of the most broadly written and troubling non-discrimination bills I had ever seen, which endangered untold number of men and women seeking to peaceably live their lives according to the dictates of the Gospel and their conscience,” Moore told Baptist Press in a written statement. “Instead, the people of Fayetteville have insisted that religious freedom will not be brushed aside by city officials.”

Ron Lomax, director of missions for the Washington Madison Baptist Association in Fayetteville, said, “We are very happy with the outcome of the vote to repeal [the ordinance]. It was a bad law and one which was passed by our city council despite what the majority of the city wanted. But many people came together from the faith community, the business community, the political community and thousands of the concerned public to make the election results happen.”

The rejected ordinance included real or perceived “gender identity,” “gender expression” and “sexual orientation” among a list of classifications to receive protection from discrimination in employment and housing. It also barred discrimination by establishments that provide “goods, services, accommodations and entertainment to the public,” which would include hotels, restaurants and other businesses. In addition, the measure created the post of civil rights administrator, who would be responsible for investigating complaints and recommending prosecution.

The city council amended the original ordinance, but the law’s foes believed the measure still threatened freedoms of religion and conscience. Among their concerns:

– Churches could have been prosecuted if they refused to hire gay or transgender people for “secular” staff posts.

– Christian schools and bookstores could have been required to violate their beliefs in their employment practices.

– Business owners with religious objections could have been prosecuted for declining to provide their services for same-sex weddings or commitment ceremonies.

The ordinance’s opponents also expressed concern about the safety of women and children because they said the measure permitted males who identify as transgender but may be sexual predators to use female restrooms and dressing rooms.

Ronnie Floyd, pastor of the multi-site Cross Church in northwest Arkansas which has two campuses in Fayetteville, described the city as “America’s current religious liberty battleground” in his Dec. 8 blog, noting that ordinances in effect in such cities as Houston an Antonio are “not even as bad as the Fayetteville ordinance.”

Floyd, current president of the Southern Baptist Convention, added a concern in his widely distributed blog that, “Pastors face fines and potential jail time if they refuse to marry a gay couple. These fines could reach $8,500 in the first 30 days, and if not paid, they could be put in jail.”

“2. Regardless of whether this ordinance is repealed or not, our hope is in the gospel of Jesus Christ our Lord. Jesus came to die for each of us, regardless of our backgrounds or present practices. We are all sinners and fall short of God’s glory. This is why Jesus died for each of us – so we could be forgiven, have purpose for life today, and spend eternity in heaven with Him one day soon.”