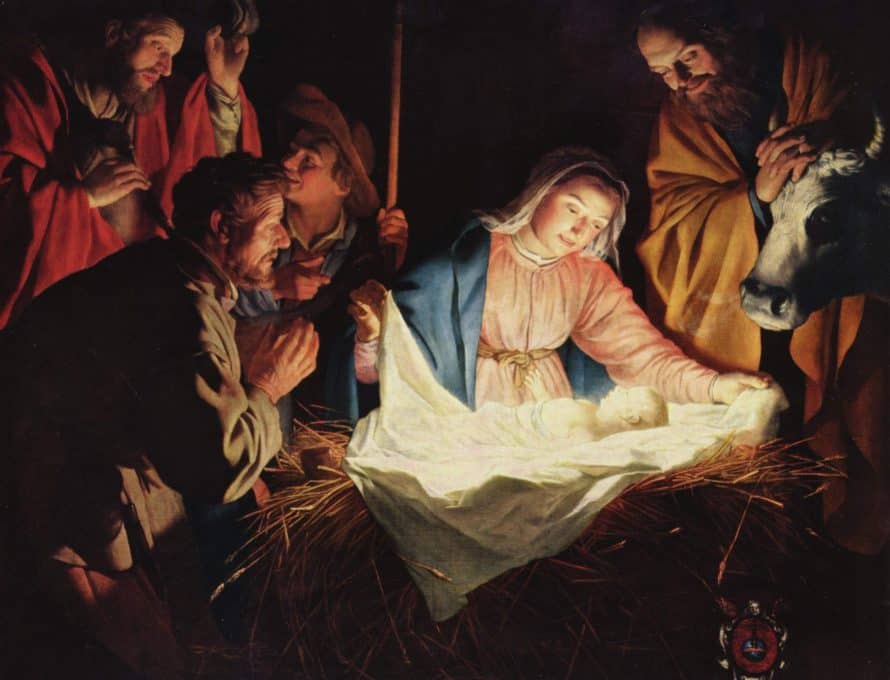 The Adoration of the Shepherds by Gerard van Honthorst.

NASHVILLE (BP) – A historian named Julius Africanus was among the first Christians to wonder why the stories of Jesus’ birth in Matthew and Luke differ slightly.

Around the year 200, Julius apparently sought Jesus’ living relatives to ask them why the genealogies of Christ in the two Gospels aren’t exactly the same. Was one of the accounts in error?

Jesus’ ancient relatives explained, according to the third-century church historian Eusebius, that the lineage of Joseph, Jesus’ adoptive father, included a Levirate marriage – the Old Testament practice by which the brother of a man who died childless would marry the widow and father a child who was legally considered the descendant of the deceased man. One of the Gospel genealogies apparently follows the biological line and the other the legal line, Eusebius reported.

Though the Levirate marriage explanation has been debated by scholars, at least one thing is certain: for the nearly 1,800 years since Julius’ inquiry, disciples and skeptics alike have continued to wonder why the Bible’s two accounts of Jesus’ birth report the story in slightly different ways. In response, three seminary professors have explained that the narratives do not contradict one another at any point and tell the story in different ways to highlight different aspects of Jesus’ person and work.

“For example, in Matthew we can see the temptation of feeling threatened by Jesus and wanting to retain control even at the cost of doing ungodly things like Herod did. And we can see how we need to be sensitive to God’s leadership as the magi were, offering their best based on God’s message to them,” Warren said. In Luke’s account God first reveals His Son’s birth to “common folks, the shepherds. And God still uses common folks to carry His message forward.”

All professors at Southern Baptist Convention seminaries pledge their agreement with the Baptist Faith and Message, which states that the Bible has “truth, without any mixture of error, for its matter” and “is totally true and trustworthy.”

Matthew’s account of Jesus’ birth is famous for its presentation of the wise men, or magi in Greek; King Herod’s murderous extermination of male children in Bethlehem; and the flight of Jesus and His parents to Egypt. Luke omits those details but reports the visit of shepherds following Jesus’ birth; Mary’s song of praise known as the “Magnificat,” named for the first word in the song’s Latin translation; and angels proclaiming, “Glory to God in the highest.”

Theologically, Matthew highlights Jesus’ status as King of the Jews while Luke depicts Him as the Savior of all people regardless of their social standing.

“If we focus on the different details the Gospel writers report, we may miss the amazing similarities,” Rob Plummer, chairman of Southern Baptist Theological Seminary’s New Testament department, told BP in written comments. “Both report that Jesus’ mother was named Mary and His adoptive father was named Joseph, both report Jesus was supernaturally born of a virgin, both identify Jesus as a descendent of David, both say Jesus was born in Bethlehem, both report that He eventually ended up in Nazareth.”

Plummer used an example from his own life to explain why it is unreasonable for skeptics to conclude that Matthew and Luke contradict.

“When my students get hung up on different details in the Gospel accounts, I encourage them to consider the complexity of their own lives,” Plummer said. “Life is full of surprising coincidences and unexpected turns. My senior year in college, I roomed with a young man also named Rob who went on to study at seminary (like me) – but he went to Princeton, while I went to Southern. A skeptical later historian might wrongly conclude that there was only one original Rob, whom some later followers attached to a ‘Princetonian’ tradition and other followers connected to a ‘Southern Seminary’ tradition.”

Plummer continued, “But wait! Imagine that after you read this article you run into someone I knew in college. He says, ‘Rob Plummer roomed with a guy named Eric his senior year in college.’ Or you meet another former acquaintance who says, ‘Rob Plummer had a single dorm room his senior year in college.’ Am I a liar? In fact, all of those statements are true. I roomed in a single dorm room half of my senior year, and then switched to co-renting a house with two roommates – one named Eric and one named Rob.”

Analogous to the various accounts of his college days that are all true but may seem conflicting, Plummer noted, “The biblical authors often choose to focus on part of this historical account and do not give exhaustive details.”

The Gospels are not “exhaustive raw footage of events,” Plummer wrote, but “inspired documentaries” that are “historical and accurate” yet “are also written from the vantage point of the inspired human authors.”

“Matthew wants us to notice how, by the grace of God, the ‘wrong’ people can understand who Jesus is, while the ‘right’ ones do not,” Madsen said. The magi were “pagan star-gazers from the east who see the supernatural star and come a great distance to worship Jesus,” but “the locals in Jerusalem” did not recognize the Savior’s birth.

Matthew’s genealogy of Jesus further demonstrates God’s willingness to accept the “wrong” people as His own by including four women — Tamar, Rahab, Ruth and Bathsheba – whose storied pasts, had they lived in the first century, would have caused the religious leaders to regard them as outsiders.

“Sometimes wicked characters and their evil deeds play a role in Matthew’s narrative, as we find with Herod,” Madsen said. “His rage against the boys in Bethlehem causes the weeping in Ramah (Jeremiah 31:15) that gives way to the New Covenant (Jeremiah 31:31-34). No one appears in Matthew’s Gospel merely for the record.”

In Luke “God is the Ultimate Promise-Keeper whose Word never fails,” Madsen said. “Accordingly, John the Baptist becomes everything predicted by Gabriel, being filled with the Spirit from his mother’s womb…. Even the census in 2:1-4 highlights God’s promise-keeping power: He will move the whole earth, so to speak, in order to put Mary in Bethlehem on schedule for the birth of her Son. Angels tell shepherds that a time of peace has come, the sign of which is a baby in a manger – a sign which they eventually see, as God had promised. The Holy Spirit revealed to Simeon that he would see the Messiah before his death; and he does, just as God had promised. We gather that something similar occurred in Anna’s case. Thus, the importance of Luke’s characters is their availability to show God’s faithfulness to His promises.”

The magi were “king-makers, almost certainly from the … Parthian Empire (an Empire that Rome had not yet conquered at that time),” Warren said. “Prior to Herod the Great claiming the throne, he had to battle the Parthians, who were trying to put their own choice of a person in as the King of the Jews. So they are now coming to do so again it appears, with Herod well aware of the threat as seen in the text’s mention of the fear that arose when the magi came to Jerusalem: ‘oh no, here we go with another war again’ would have been the feeling, only this time it would be a different type of king.”

Warren proposed a timeline of how the birth narratives in Matthew and Luke might fit together:

“– Joseph decides not to divorce her due to the visit of the angel (Matthew and Luke).

“– The birth of John the Baptist happens (Luke).

“– The star appears to the magi and they begin their journey (Matthew).

“– The shepherds get the notice about Jesus’ birth and visit Him in the birth cave (Luke).

“– The magi arrive in Jerusalem and then go to Bethlehem to see Jesus at the house (Matthew).

“– Herod realizes that the magi are not going to return to Jerusalem and orders the killing of the babies in Bethlehem (Matthew).

“– Joseph and Mary flee to Egypt with Jesus (Matthew).

However believers think the two accounts fit together, it is illogical to say they contradict, Madsen said.

“Matthew’s infancy narrative would contradict Luke’s only if, in some respect, Matthew says ‘A’ and Luke says ‘not A,'” Madsen said. “But the two accounts don’t differ in that kind of way. What we see, rather, are differences arising from the standards by which Matthew chooses to include information not given by Luke, and vice versa.”