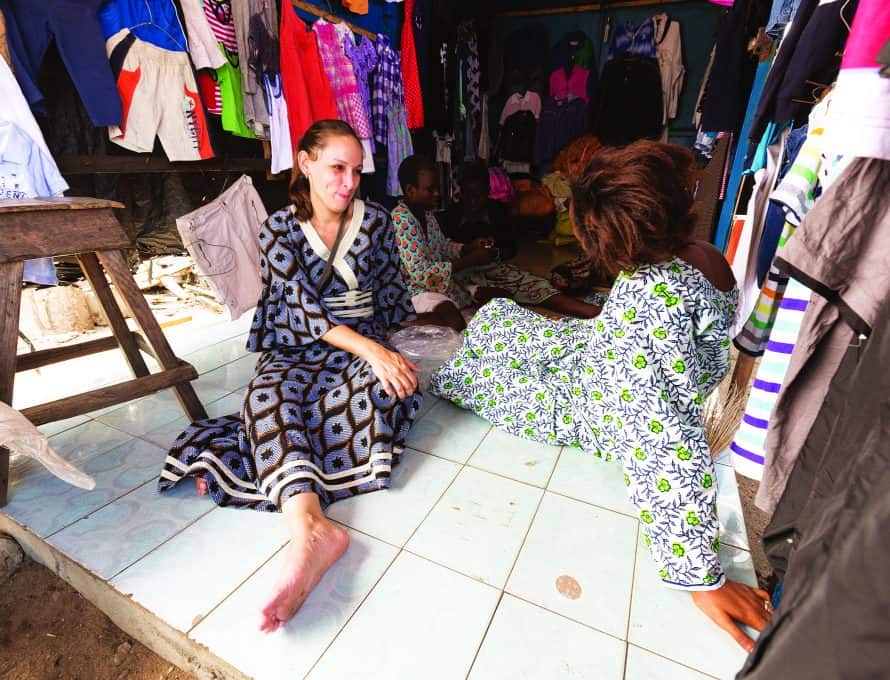 On this night, six members of Arkansas’ Valley Baptist Church in Searcy squeezed into a modest Muslim home in Abidjan, Ivory Coast, and dipped their spoons into African groundnut stew and fish sauce served over attiéké, the staple Ivorian food made from cassava. They were eating with a local family who was breaking their Ramadan fast.

“Man, you couldna told me 10 years ago I’d be over here eatin’ with a Muslim,” Paul Yingling said with an incredulous shake of his head. But then, you couldn’t have told Yingling, and his wife, Jan, that God would so burden their hearts for Muslims that they would find themselves traveling to West Africa to tell stories about Christ. Yingling is an auto technician in Searcy, a town about an hour northeast of Little Rock. The Yinglings were part of the team of Valley Baptist Church volunteers who first journeyed to Abidjan last year to see how their hometown church might impact a West African city far away.

The small home belongs to a hospitable and dignified man named Seidou. He shares it with his immediate family, as well as a brother and his two wives. Seidou and his three brothers, all tall and stately, have gathered for the meal tonight. Like many immigrants, they came to Abidjan from Burkina Faso looking for work. Two of the wives, dressed in vibrantly colored traditional gowns with matching scarves knotted around their heads, serve the men and guests and then disappear back to the “kitchen” outside the front door.

IMB missionaries Mike and Heather McAfee, and their children, Caleb, Karis and Benjamin, are here as well, thanks to Southern Baptists’ Lottie Moon Christmas Offering and Cooperative Program, which support more than 4,800 Southern Baptist workers overseas. The McAfees, friends of Seidou’s family, are urban church planters in Abidjan, the economic capital of the country. Its ever-growing population of at least 6 million reflects the diversity of West Africa: city dwellers speak 60 indigenous languages, with French as the official language, a remnant of its colonial past. Religious practices in the city reflect the same cultural mélange: Islam, Catholicism and African tribal religions influence daily lives. Evangelicals are in the minority.

Mike and Heather wear many hats as they work with Ivorian churches and seek to establish new church plants in this sprawling metropolis. They train, they encourage, and they evangelize. They also network and thus have turned to Southern Baptist churches in the U.S. to partner in this sacred effort. One of these churches is Valley Baptist Church. On the church’s first visit, the McAfees introduced the team of five women and one man to areas of the city where they saw potential for a church plant. The team worked with translators and members of the local Treichville Baptist Church to meet neighborhood residents and engage them with Bible stories.

One morning they ventured to Attécoubé, northwest of the central business district of Abidjan. To get there they traveled up a rutted dirt road muddied by recent rains to where a Treichville church member named Mama Tra lives. There, Mama Tra shared with them how she hoped a small plot of land she gave to the Lord could be the place for a new church. Then the team fanned out into the neighborhood to pray in homes and share Bible stories with those they met. It was the first time Paul and Jan Yingling shared their faith with a Muslim.

Later, Paul Yingling described the dynamic of joining with the Treichville church to impact Abidjan.

“The believers here … want to reach this city for Christ. They are capable of sharing the gospel; it just kind of helps that we’re here – it kind of gets their foot in the door, you know. …They love God and even though I’m a country boy from Arkansas, we’re able to come together in one accord and share the gospel for Christ,” Yingling says.

“We have been blessed with the fact that we have monetary resources but also the fact that we’re free to worship, we’re uninhibited, we can share the gospel any way we want,” Yingling continues. “But a lot of times we sit on the pew and we don’t fulfill the Great Commission.”