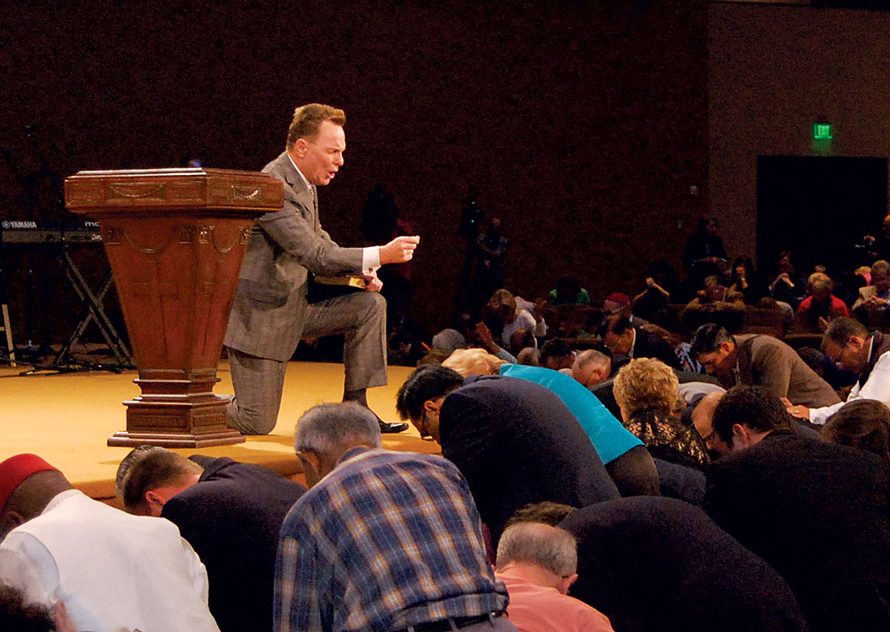 HOUSTON (BP) – As pastors embroiled in a lawsuit against the city of Houston rallied thousands Sunday for the cause of religious liberty and with chants of “Let the people vote,” their cohorts in the battle also were crying out for the church to repent for its retreat from the public square and its role as the public conscience.

Part revival meeting, part civics lesson, the “I Stand Sunday” rally Nov. 2 in Houston drew more than 6,000 people to Grace Community Church, led by one of five ministers subpoenaed for their role in a legal fight against city hall. An additional 300 churches and 765 homes logged into the live stream webcast.

The lack of civic participation on the part of Christians has resulted in cultural conflicts arising throughout the nation, with Houston as a flashpoint in the national clash between religious liberties and government policies.

And though Mayor Annise Parker has directed city attorney Dave Feldman to withdraw subpoenas against the five ministers, the mayor’s critics called the court order an act of political intimidation that could not be undone with the removal of the subpoenas. For the pastors, and more than a dozen speakers gathered on their behalf, the primary issue remained — the city administration’s unauthorized dismissal of thousands of signatures on a referendum that thwarted the residents’ right to vote on the issue.

The ordinance that sparked the legal battle was passed by Houston’s city council in May to give civil rights designation to individuals based on their sexual orientation and gender identity. More than 50,000 signatures were gathered on a referendum to put the ordinance to a vote in Houston. And though enough signatures were verified by city secretary Anna Russell to put the measure on the Nov. 4 ballot, Feldman disqualified thousands of pages of signatures for reasons not prescribed in the city charter.

The coalition sued the city to have the signatures certified and the ordinance put to a vote by the city’s residents. As part of their defense, the city subpoenaed five ministers, calling for their sermons, speeches and other communications with their church members.

“It’s not about the issue of transgender rights. It’s about the fundamental issue: Do all citizens have equal rights? And those rights include the right to vote,” Huckabee said in a news conference prior to the rally.

The issue is all the more profound for three of the five subpoenaed pastors. As immigrants or the child of immigrants to America, they spoke passionately about fleeing the abuses of communism and enjoying religious and civil liberties as Americans.

Khanh Huynh, senior pastor of Vietnamese Baptist Church, a Southern Baptist church, was among the 2 million “boat people” refugees seeking asylum in America in the 1970s.

“The freedom of speech and freedom of religion were among the first to be lost in Vietnam. And now I’m facing the same marching boots of tyranny right here where I live,” Huynh told the audience.

Magda Hermida, founder of Magda Hermida Ministries, told how she and her husband left Fidel Castro’s Cuba nearly 50 years ago where they lived under the scrutiny of a police state.

“We never thought we would see what is happening — that is now happening in this country — here in Houston, in our beloved America,” she said.

The son of South American immigrants, Hernan Castano, pastor of Iglesia Rios de Aceite, said pastors should be able to speak about the issues of society from a biblical perspective without being afraid “to be condemned, to be subpoenaed, or to be intimidated.”

“I stand here today so that no government will abuse the power that people gave it to come against the church,” Castano said to a standing ovation.

There were many such ovations during the rally.

The lead sponsor of I Stand Sunday, the Family Research Council, demonstrated through videos and speakers the growing conflict between Christians living out and speaking of their faith in the public square and government policies and social pressures that seek to silence them. The images were stark, but the church is not held blameless for the state of affairs.

“In this country that means we have not just the right to vote but, if we love God, we have a responsibility to vote and to be the salt and the light for our nation. And we have failed,” Huckabee said.

Dave Welch, executive director of the Houston Area Pastor Council and one of the subpoenaed ministers, noted that just over 10 percent of eligible Houston residents voted in the 2013 mayoral election. Less than a month after Parker’s re-election, she began development of the Equal Rights Ordinance.

“We cannot blame the people who do not love God,” Huckabee said. “We’d better look inwardly and say, ‘It’s because we’ve told our people that they could effectively be wonderful Christians just going to church and reading their Bibles and praying, and voting wasn’t that important.”

Prominent Southern Baptist pastors drove that message home calling on Christians to repent of their apathy and to recognize that cultural change does not happen at the ballot box but in the hearts of those who call on Christ in faith.

Ed Young, pastor of Second Baptist Church in Houston, said, “This gathering will be construed by a lot of people as a political gathering [saying], ‘They were here mad and militant and violent,’ but we are here as worshippers of our Lord and Savior, Jesus Christ.”

Young added that Christians pray for those in leadership, including Parker.

SBC President Ronnie Floyd, drawing his comments from Revelation 3:22, asked what the Spirit of God is saying to the church of America.

And with that Floyd called on the audience to take a posture of prayer, leading them in a prayer of repentance and revival “to do only what God can do.”

Tony Perkins, president Family Research Council, said just one person contending for the faith in the face of political and societal scorn can encourage others to do the same.

What to do with the political opposition that seeks to silence and even punish Christian voices?

“We need to lift up the Word of God with one hand and the love of God with the other,” Floyd said. “And we need to stand unwaveringly, unapologetically, but always compassionately with those who choose to disagree.”