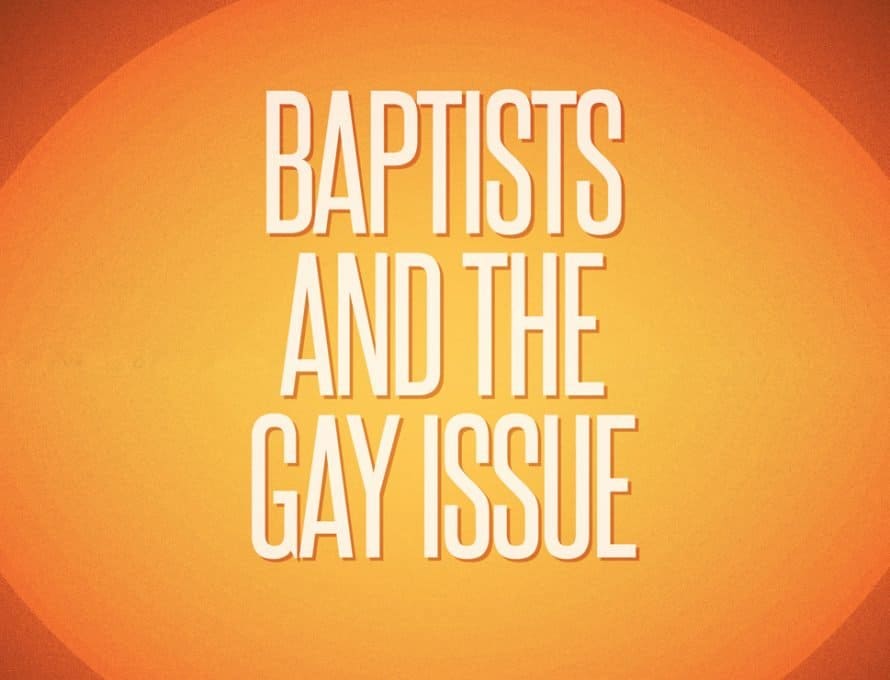 Every morning, the Wall Street Journal arrives at my office. I read it to capture a relatively balanced view of cultural trends and financial markets in the U.S. and the world. Needless to say, I was shocked that the Journal ran articles about Southern Baptists and Apple Corporation’s Tim Cook on the same page. Interestingly, Cook’s “coming out” announcement was actually verification of old news. Running a story about Southern Baptists above the fold was a shock.

The headline read, “Southern Baptists Soften Tone on Gays.” Really? Unlike the Roman Catholics who change at the whim of a pontiff, Southern Baptists on the whole have changed nothing because our core belief system is based on the unchanging absolutes of God’s word. At the very least, the headline is misleading.

Consequently, allow me to list of five simple things to remember about Baptists, especially in the context of the social confusion created by a small minority of American citizens:

First, Baptists are people of the Book. The principles of God’s Word are neither for sale nor are they negotiable. That makes Baptists a stubborn lot. When Baptists have made mistakes by following cultural prejudices instead of Scriptural truths, they on the whole tend to repent and move forward, hoisting high the Word of God as the authority for life, liberty and purposefulness.

While biblical principles are for all people everywhere, by faith the embrace of the Gospel gives individuals the opportunity to enter a personal relationship with the ultimate Author and Teacher of the Word. As a result, Baptists tend to test their worldview by the Word of God and desire that every aspect of life is compatible with its truths.

Second, Baptists love people. Collectively, Baptists love people so much they invest millions of dollars in ministries to help people in the United States and around the world. They volunteer for all kinds of helping ministries. They know that being part of a church is more than the number of noses at some church gathering. They are part of a community of believers involved in touching the world with the Gospel.

When calamities strike, it is Baptists with those bright yellow shirts who are some of the first on the scene to help people through the crisis. It is in our spiritual DNA to love people and help them walk through their trials. Our hope is that others see the love of God through us.

Third, no Baptist can speak for all Baptists. Someone can speak in a general way about Baptists. Someone can speak to Baptists. But to speak for all Baptists is contrary to our autonomous nature. Beyond Scripture, the closest thing we have to address the sentiments of Baptists relating to moral or social issues are the various resolutions that are passed at annual meetings. Even that is the reflection of thought of the Baptists meeting at that moment in history.

Fourth, Baptists trust the transformational Gospel more than psychotherapy. Some of the discussion at the reported conference in Nashville, Tenn., revolved around “reparative therapies aimed at ridding patients of unwanted same-sex attractions.” While there is a place for the psy-chologist, Baptists are highly suspicious of that work when it sterilizes the transformational power of the Gospel.

ERLC president Russell Moore suggested that instead of looking to psychologists for a cure for same-sex attraction, people need to look to Christ for the power to overcome temptation of all forms. “The Bible doesn’t promise us freedom from temptation,” said Moore. “The Bible promises us the power of the Spirit to walk through the temptation.”

Fifth, Baptists are the standard bearers for religious liberty and good public policy. The current debate in our nation is actually whether or not dichotomous worldviews can exist with equality. While in theory that really sounds compelling, in a practical sense it is next to impossible. In the context of religious freedom, the majority worldview must accommodate the minority. Currently, the minority worldview of the LGBT is clamoring for acceptance and does not tolerate the biblical convictions of believers who have influenced this culture for decades.

Will Baptists withdraw from the discussion? Not on your life! And do not mistake our compassion for people as acquiescence of our biblical convictions.

As part of convictional living, Baptist have a history of promoting justice and the common good. We work for laws that are historically founded and generationally positive. We cannot shrink from the responsibility that God has called us to lead people to repentance and faith in Christ. Remember, the law is to be a tutor