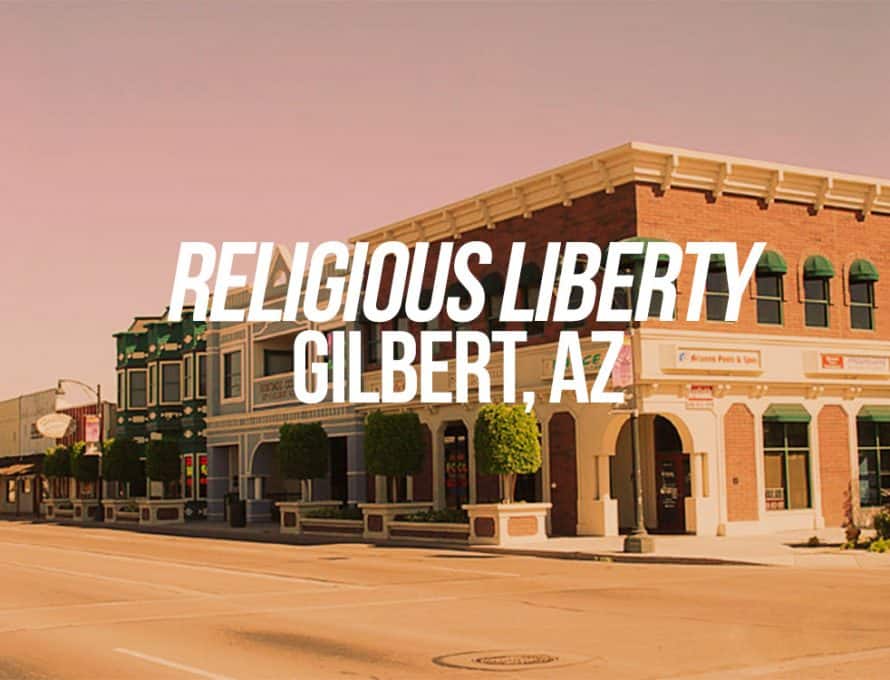 WASHINGTON (BP) — The Southern Baptist Convention’s religious freedom entity has called for the U.S. Supreme Court to strike down a municipal sign ordinance it says violates a church’s free speech and assembly rights.

The Ethics & Religious Liberty Commission (ERLC) joined in a friend-of-the-court brief filed Sept. 22 that contends the sign code of Gilbert, Ariz., discriminates against churches while favoring political and ideological messages. The brief, filed by the Christian Legal Society (CLS), asserts the code is based on a sign’s content and therefore abridges the First Amendment’s free speech clause.

The high court will hear oral arguments in the case, Reed v. Town of Gilbert, in January or thereafter. It is expected to announce an opinion in the significant church-state case before it adjourns early in the summer of 2015.

Good News Community Church, which meets in a public school, challenged Gilbert’s sign code. The church — which averages between 25 to 30 adults and four to 10 children in weekly worship — relies on temporary signs to inform the public of its meetings, according to the CLS brief. Clyde Reed, pastor of the church, said the signs had been “very, very effective” during the 10 years they have been used, the brief stated.

“By limiting the size of these signs and the duration they can be put out, the town of Gilbert has signaled that it values politics more highly than the spiritual and social well-being of their community,” Duke said in written comments for Baptist Press.

“This case also has direct bearing on our convention’s church planting efforts,” said Duke, who planted a church in the Denver area before joining the ERLC staff. “As a church planter myself, I know very well how absolutely crucial it is for new church starts to be able to put up temporary signs. Without a building, these signs provide one of the primary ways a new church can help the community know it is meeting in their area. This was one of the main ways my new church made its presence known to our community in Denver.

“For the sake of churches and the communities they seek to serve, this ordinance must be overturned.”

The Ninth Circuit Court of Appeals in San Francisco ruled the differences in Gilbert’s code are neutral regarding content because “none draws distinctions based on the particular content of the sign.” The appeals court stated, “It makes no difference which candidate is supported, who sponsors the event, or what ideological perspective is asserted.” The code is not based on “disagreement with the message conveyed,” according to the Ninth Circuit.

The CLS brief joined by the ERLC contends, however, Gilbert’s ordinance “discriminates among noncommercial signs based on subject matter, which is a form of content discrimination.” The code discriminates on its face and is subject to “strict scrutiny” regardless of the town’s motive in passing it, according to the brief. “Strict scrutiny” is a standard of judicial review that requires the government to demonstrate it has a “compelling interest” and has narrowly tailored a law to that end for it to be found constitutional.

Gilbert’s code also is inconsistent with the constitutional protection of the freedom to assemble, the CLS brief states. “The right ‘peaceably to assemble’ protects the ability of Good News and other non-profit organizations to communicate their messages about their gatherings, including gatherings that are not immediately political or ideological,” according to the brief.

“For small congregations, the restrictions on the less expensive and more effective medium of signs do not simply cause inefficiencies or raise costs; they may seriously hamper First Amendment activity,” the brief contends.

In addition to the ERLC, among others signing onto the CLS brief were the Anglican Church in North America, Association of Christian Schools International, Christian Medical Association, Evangelical Council for Financial Accountability and Lutheran Church-Missouri Synod.

The Missouri Baptist Convention and its Christian Life Commission also filed a friend-of-the-court brief in the case in support of the church. The brief, authored by Southern Baptist father-son lawyer team Michael and Jonathan Whitehead, argues the sign code violates First Amendment’s protections of freedom in speech, religion and assembly.