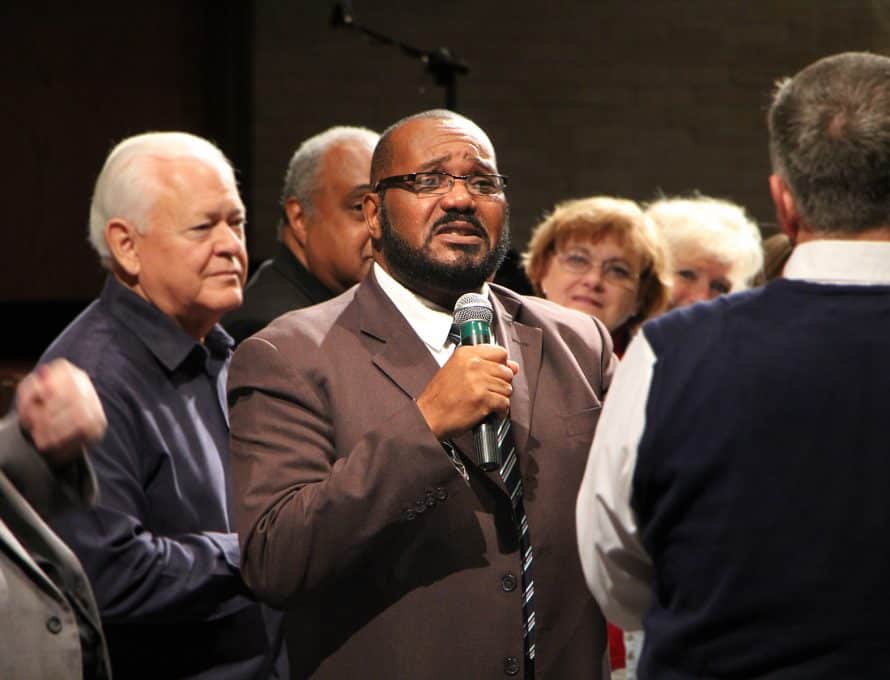 FERGUSON – When the National Day of Prayer (NDP) bus stopped at First Baptist Church Ferguson Sept. 13, the prayer warriors moved beyond their planned emphasis and prayed for unity.

According to Dion Elmore, the NDP task force conducted more than 43,000 prayer activities this year through their many volunteers across the country.

“We want to pray strategically and intentionally,” Elmore, director of public relations for the NDP task force, said. “We’ve taken our bus into 34 states and many communities and we talk and listen. We want to know what the Spirit is doing in the area.

“We want to mobilize and encourage prayer more than one day a year. We want National Day of Prayer on the first Thursday of May to be a focal point, but we also want prayer the other 364 days of the year.”

The bus pulled up at FBC Ferguson slightly more than one month after the shooting death of Michael Brown, which sparked protests in Ferguson and controversy across the nation.

The NDP bus tour, which will end in Hollywood this year, is focusing upon prayer for the media and entertainment industry. But prayer for Ferguson, in light of the community’s recent tragedy, was also highlighted during this stop. The final prayer activity included a joining of all hands in a large oval that filled the front of the church. During this time, Ferguson Pastor Stoney Shaw and other pastors led the group in prayer for the community.

During this time, Charles Ewing, who is Michael Brown’s uncle and the pastor of Jennings Mason Temple in St. Louis, spoke to the group.

“I didn’t really want to come back to St. Louis,” Ewing said. “But God called me back here. After Michael’s death, the Holy Spirit led me to Genesis 4, ‘Am I my brother’s keeper?’ and God’s response, ‘Your brother’s blood cries to me from the ground.’”

“We miss Michael,” he said, “but we have been praying for revival in the Midwest, and now the world is focused on Ferguson.”

The large gathering in Ferguson collected people of prayer from across the city and county of St. Louis. Elmore cited James 5:16, “The effective, fervent prayer of a righteous man avails much.”

“We are to pray with the authority of Christ and He was given all authority,” he said. “That means we can forget all of the circumstances that surround us, all the war, all the hate, and all those fighting against each other.”

“These are mind molders,” Elmore said. “We want to pray for the transformation of hearts in all of these areas: government, military, education, church, family, business and media. In addition to prayer, build relationships with people. For example, get acquainted with your local city representatives. Send them a card to tell them you are praying for them.”

Kathy Branzell, educator on the NDP task force also heads FACE , a group representing 135,000 school teachers, explained why the bus was headed to Hollywood, California. “We want to teach Hollywood to pray because media shapes our culture,” she said, “and teaches culture what to believe and how to behave. Then, that culture writes our curriculum, votes and has a major impact on the direction of the country. We want them to be touched with what Jesus said.”

During the prayer event, Elmore also called all the current students, from every level, up to the front and asked the NDP volunteers to place hands on each student as the congregation prayed for a blessing on each one.