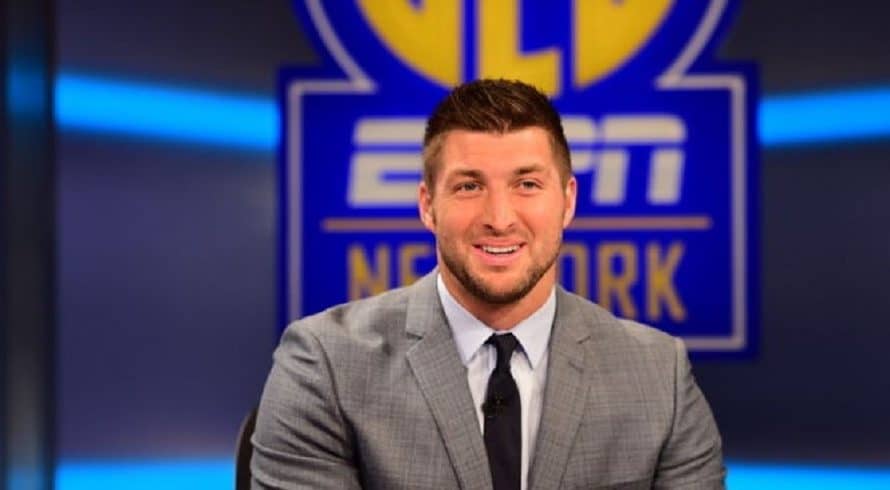 NASHVILLE (BP) – Tim Tebow, the popular former college and pro quarterback revered and criticized for his Christian faith and his on-the-field prayers that coined the word “Tebowing,” continues to make headlines this year as a football commentator – and now as a morning show contributor.

Tebow, an analyst for the SEC Network and ESPN, has signed on with “Good Morning America,” ABC News announced Thursday (Sept. 11). A member of First Baptist Church in Jacksonville, Fla., Tebow will be a part of the show’s “Motivate Me Monday,” a non-football series. “Tebow will appear in studio and live on location in towns across America with a wide-range of reports that motivate and inspire,” the ABC release said.

The Heisman-winner who played for the University of Florida has garnered positive reviews from the media as a college football commentator for his warm personality and knowledge of the game. Earlier this year Tebow drew praise for his pregame analysis and predictions for the BCS National Championship game. Tebow predicted the Florida State University Seminoles would beat the Auburn University Tigers 35-31. Final result? FSU won 34-31.

“Tim is a SEC icon with a national fan base and broad appeal,” ESPN Vice President Justin Connolly said in the news release after Tebow signed on with the SEC Network last year. “He will be a significant contributor to the compelling content we will deliver…. Tim brings a wealth of knowledge about the game, the conference and the passion among SEC fans.”

Before becoming a football analyst, Tebow’s public declarations of his Christian faith set off a nationwide discussion about whether professional athletes should keep their religious faith to themselves.

Many evangelical Christians rallied around Tebow as he played two seasons for the NFL’s Broncos in Denver, helping lead them on a playoff run in 2012. He then played a year for the New York Jets before being cut in the 2013 preseason by the New England Patriots. Tebow has said in past reports that he still hopes to play quarterback in the NFL.

Some Tebow supporters have cried foul over the secular media criticizing the quarterback for being too outspoken about his Christian faith while other athletes – the NBA’s Jason Collins and NFL’s Michael Sam – have drawn praise for going public about their sexual orientation.

This season, much of the news media hailed Sam as a hero for being the first NFL player to publically announce he is a homosexual. Sam even shared a kiss on national television with his boyfriend after the St. Louis Rams drafted him this spring. The team cut Sam a few weeks later, but the defensive end was picked up by the Dallas Cowboys’.