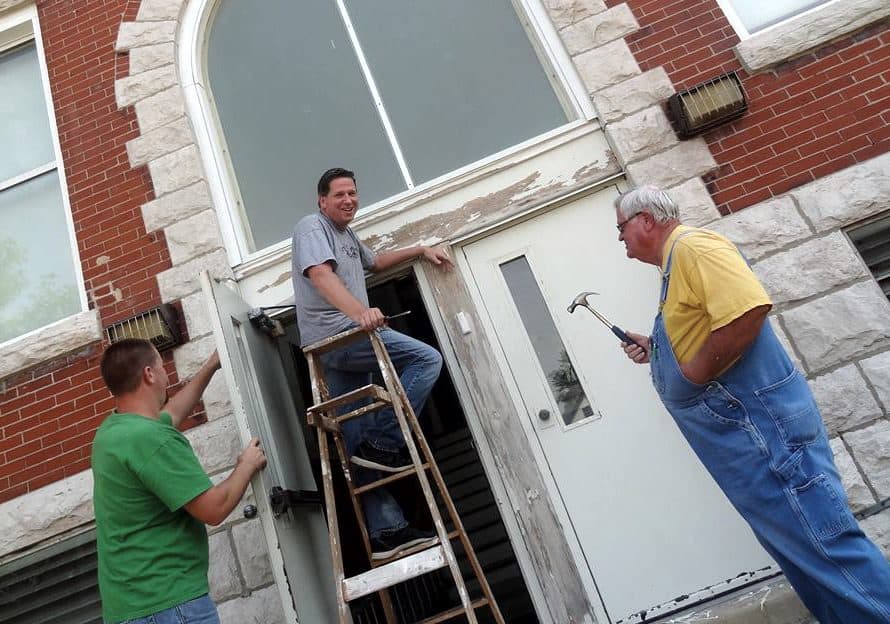 EAST ST. LOUIS, Ill. – It’s easy to forget about the “other” St. Louis on the Illinois side of the Mississippi River, but the churches of Laclede Baptist Association have seen Kingdom results in East St. Louis as part of the North American Mission Board’s (NAMB) Send initiative.

Seventeen volunteers from seven churches in the association partnered with Light of Christ Church in East St. Louis in late July. The weeklong ministry project focused on Vacation Bible School, electrical repairs to the church’s building, other renovations, a clothing giveaway and a final block party.

Light of Christ Church is four years old and became affiliated with the Southern Baptist Convention and the Illinois Baptist State Association about three years ago. They had been meeting in a small store front, but recently purchased a nearby former elementary school. Before the church purchased the property, it was a homeless shelter, a ministry the church continues.

East St. Louis is part of the St. Louis metro area and is included as a “Send City” by NAMB. The Send strategy focuses on mobilizing missionaries and churches in strategic large cities across North America.

When churches or individuals sign up they are first assessed to identify the types of partnerships or missionary tracks that best fit them. Then NAMB provides any needed equipping and training – including evangelism and leadership development – before the missionary or church enters the mission field. Missouri has two Send Cities: St. Louis and Kansas City.

Churches that partner with NAMB have a broad range of participation options, including starting a church themselves or with a group of other churches. All are encouraged to send volunteers and other resources to partner with church planters on the field. Currently, fewer than four percent of SBC churches are engaged in church planting as a primary sponsor. NAMB’s goal is to see this increase to 10 percent.

“Christ has called us to co-labor with Him in the ‘Great Co-Mission,’ to make disciples and thus advance His kingdom,” said Gary Frost, NAMB vice-president for the Midwest Region. “We are seeing God’s Spirit responding to the faithful prayers of intercessors in the Midwest and beyond. We see Him compelling compassionate workers to surrender their agendas for His and thus become messengers of hope in some of the most challenging places in the Midwest.”

East St. Louis is known for its dipping economy and high crime; the murder rate there is 20 times the national average per capita, and nearly three times that of St. Louis just across the river. Still, East St. Louis yielded Kingdom results during the Laclede team’s trip. An average of 35 children showed up each day for the Vacation Bible School, and six boys accepted Christ.

More evidence of that timing came in unexpected bad news from city hall.

“Early in the week the pastor, Pastor Barnecio Cureton, was informed in a visit by city officials of various fire and city codes that would need to be updated and corrected,” Strauch said.

“While the team had originally planned to work on another renovation project, they were able and ready to shift their focus and cooperate with the city and pastor to get many needs on the list taken care of. It is a reminder that God has us at His place and His time in His season of need.”

“While it is still a matter of prayer, the team definitely saw the Spirit’s connection and fellowship with the church family and the various needs, and we consider this a very strong potential ongoing partnership for a season.”

For more information on Send North America, go to www.sendnetwork.com and www.namb.net.