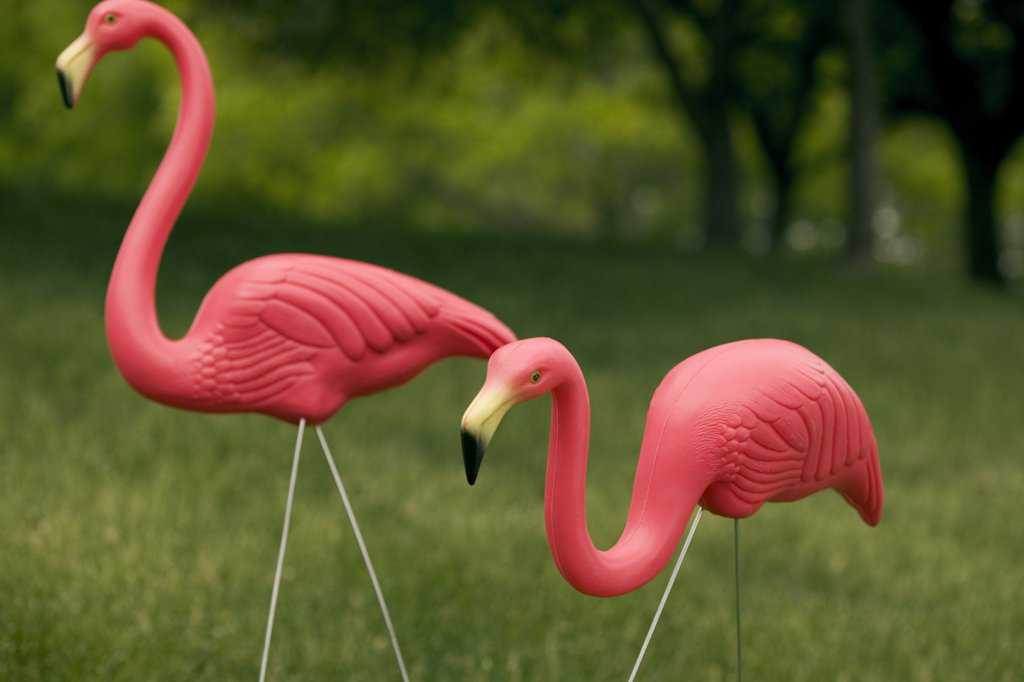 Have you ever awakened in a morning to find that an entire flock of pink plastic flamingos migrated into your yard in the night? Weird nesting behavior, right?

It makes me sound old when I say it, but when I was a teenager, all we knew how to do was TP. I respect the creativity that rules the pranks of the day – those that are truly non-vandalous, of course. In the past few years, our property has not only been toilet-papered, but we’ve been plastic forked, we’ve been feathered, we’ve been strawed – we’ve even been instant-mashed-potato-ed.

We’ve been strung with Christmas lights (in the summer) and we’ve been strung with … actual string. It looked like a giant spider had a psychotic break on our back deck. I have friends who, not to be outdone, have been sofa-ed! Even tractor-tired. The past few years we’ve seen everything but the kitchen sink. Oh no, wait. Actually I saw that too. Someone literally got sinked (sunk?). That was a good one.

I’m not sure, however, anything else has impressed me quite like the flamingos. Unless maybe it was the couple I heard about recently who caught sight of a set of prankers TPing their yard, and the couple actually went outside and – are you ready for this? – they helped them. They essentially became their own vandals!

If I’d been one of those particular prankers and knew I’d been busted, pretty sure I would’ve gone the less classy route. That being, escape! I would’ve run. And never would it have occurred to me to ask the people I was pranking to pitch in. Usually when you decide to take a stand, you have to be ready to fight some kind of silly battle – even if it’s only with feathers. And that flamingo army? They’re not backing you up.

In truth, there’s a lot to be said for knowing when to run. The Bible tells us to run away from temptation and to run to righteousness. “Flee from youthful passions, and pursue righteousness, faith, love and peace, along with those who call on the Lord from a pure heart” (2 Tim. 2:22). Sometimes sticking around where sin abounds is risking becoming our own life-vandal.

Sometimes we run. But sometimes we stand. “Finally, be strengthened by the Lord and by His vast strength. Put on the full armor of God so that you can stand against the tactics of the Devil” (Eph. 6:10-11). When we stand and fight, we do it in His strength and not our own.

So how do we know when to stand and when to run? We study God’s Word and we allow His Holy Spirit to give us direction. Prov. 3:5-6 teaches us to trust the Lord to direct us – and He will. “Lean on, trust in, and be confident in the Lord with all your heart and mind and do not rely on your own insight or understanding. In all your ways know, recognize, and acknowledge Him, and He will direct and make straight and plain your paths.”

As we lean on and trust in Him, we’ve got this. We can know when to run and when to stand.

Which incidentally, is not necessarily related to when to sink and when to flamingo.