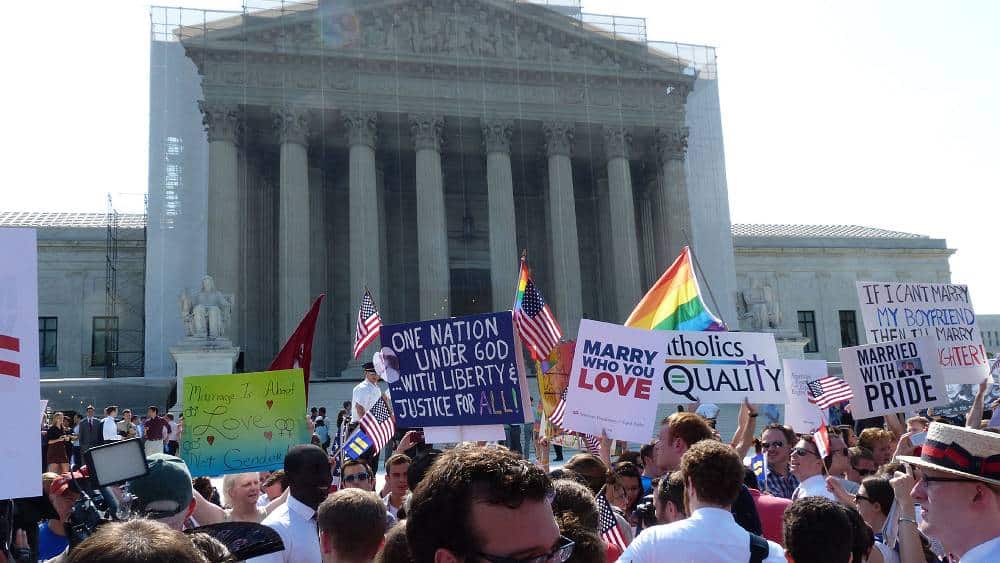 There are dozens of cases clogging federal and state courts. Conservative estimates say it will take at least two years for most of them to be heard and that excludes the lengthy appeals process that delay things further. I suspect the reason much of the media and same-sex marriage advocates want to rush this along is because as long as Americans have time to thoughtfully debate it, the more likely it is Americans will come to our senses and protect traditional marriage. The courts should let public debate exhaust itself before jumping in to decide the matter. Some in the judiciary realize that the U.S. Supreme Court should not have ruled on Roe v. Wade, but should have let the American public continue to debate. As the ongoing fight over abortion demonstrates, Roe v. Wade did not settle the issue and it has promoted often bitter divisiveness. The courts are in danger of making the same mistake with same-sex marriage. For 238 years Americans have said marriage is between a man and a woman. To change so quickly should give us pause. Radical fringes of society have a tendency to push for hasty decisions.

Of all the misleading points the media makes, it is their incessant declarations that same-sex marriage is inevitable and that the U.S. Supreme Court struck down the Defense of Marriage Act (DOMA). Both are false – and they know it. What is discouraging in this debate is that too many Americans are either unaware of these facts or do not care.

Same-sex marriage is not inevitable. Is traditional marriage facing a serious threat? Yes. But, there are nearly twice as many states that prohibit same-sex marriage and those that allow it, some only because of a federal judge’s ruling that may get overturned on appeal. While same-sex proponents like to tout a recent poll showing 55 percent of Americans supporting same-sex marriage, it is a national poll and depending how the question is asked, it gets a particular, often desired answer. That is but one of many factors that can be problematic for such polls. Gallup reported that the rate of growth for support of same-sex marriage has stalled, suggesting it has peaked. If you poll state by state, same-sex marriage will lose. In Missouri some polls show a little increase of support for same-sex marriage, but I do not know of any poll that shows Missourians have changed their mind appreciably since 2004, with those favoring traditional marriage still running about 2-1 over those wanting same-sex marriage. You can bet if PROMO, the homosexual group in Missouri, thought they could win at the ballot box, we would be going there this fall, but they want nothing to do with another ballot initiative.

This is precisely what KMBC television in Kansas City told viewers while reporting the story about the four same-sex couples having marriage-type ceremonies in the presence of Francis Slay, the Democrat mayor of St. Louis on June 25. The ceremonies were presided over by a municipal judge and bogus marriage licenses were issued to the couples. Then St. Louis Circuit Judge Rex Burlison let it all stand, clearly in violation of the rule of law.

Judges should follow the rule of law and let the debate on this issue continue. The recent federal court rulings striking down constitutional prohibitions of same-sex marriage are based on shaky new legal theory based on the equal protection clause in the 14th Amendment to the U.S. Constitution. They disregard the 10th Amendment which delegates the definition of marriage to the states and make no attempt to even “harmonize” the difference in the two amendments. This blatant disregard of the rule of law is making us a lawless people.

What comes to mind is Israel in the day of the Judges. That was time of great lawlessness and wickedness. The reason those years were so terrible is explained in Judges 21:25: “Everyone did whatever he wanted.